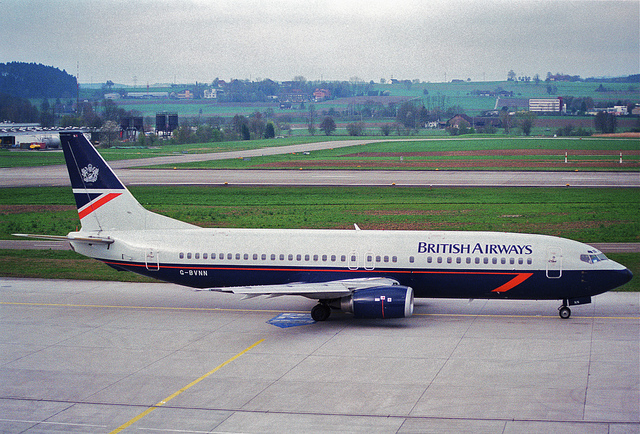 Brought back down to earth. BA has been branded the least fuel-efficient transatlantic carrier. [Aero Icarus/Flickr]

British Airways is the least fuel-efficient of the top 20 airlines travelling between Europe and North America, and the most carbon intensive way for a passenger to cross the Atlantic, the researchers that exposed the Volkswagen scandal today (17 November) said.

Lufthansa, a German industry champion like under-fire Volkswagen, was also criticised in the report by the International Council on Clean Transportation (ICCT), which compared fuel-efficiency levels of the long-haul flights in 2014.

The lower the fuel efficiency, the more polluting carbon is emitted into the atmosphere, where it contributes to global warming.

“British Airways is the most carbon-intensive way to cross the Atlantic,” said Andrew Murphy, aviation policy officer at Transport & Environment.

Lufthansa and SAS were close behind at the bottom of the ranking with 28. The three airlines were responsible for one-fifth of seat capacity on transatlantic traffic.

US carrier Delta Air Lines, which has the largest market share, and Icelandair were the industry average according to the report.

EURACTIV has contacted both British Airways and Lufthansa for comment. Neither had responded by time of publication. 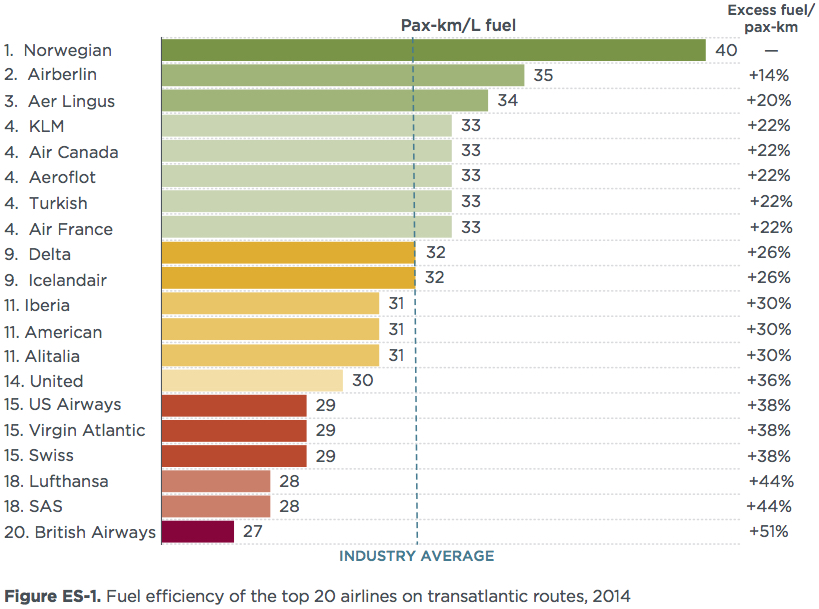 The ICCT report revealed that a non-stop transatlantic flight cost about one tonne of CO2 per passenger, the same as a 35 kilometre daily commute in a Toyota Prius over a work year.

First class and business seats accounted for just 14% of seat kilometres flown on transatlantic routes but were responsible for one-third of total carbon emissions, it said.

“It’s surprising to see such large differences in fuel efficiency among airlines on long-haul flights over the Atlantic. The airline you fly, and the aircraft they choose to operate, really matters if you’re concerned about the climate,” said the ICCT’s program director for aviation, Dan Rutherford, a co-author of the report.

The ICCT combined commercial and public data with fuel burn modelling to benchmark the airlines.

If global aviation were a country, it would rank 21st in terms of GDP, but 7th in terms of CO2 emissions, just behind Germany and well ahead of South Korea. Globally, aircraft emitted about 700 million metric tons of CO2 in 2013.

Aviation emissions are set to triple by 2050, unless policymakers intervene, according to the ICCT.

Reducing emissions is high on the political agenda as world leaders prepare to meet in Paris from 30 November for the UN Climate Change Conference (COP21).

The COP21 aims to secure a worldwide deal to cap global warming to two degrees above pre-industrial levels. COP21 delegates will meet at Paris’s Le Bourget Airport to discuss how to incorporate greenhouse gas emissions from international aviation into a global climate protection framework.

Transport & Environment’s Murphy said, “If you can’t get airlines on the most lucrative route in the world to improve fuel efficiency, then how can you expect it to happen elsewhere in the world? Market intervention is needed if aviation is to play its role in keeping global warming below 2 degrees.”

ICCT was the research group that tipped off US authorities about Volkswagen’s cheating of emissions tests.

The revelations sparked the biggest crisis in Volkswagen’s history after Europe’s biggest car-maker admitted in September that it had fitted 11 million vehicles with devices designed to cheat pollution tests.

Volkswagen will have to meet the costs of retesting its vehicles in Britain in the wake of the diesel and carbon dioxide emissions scandals engulfing the German carmaker, Britain’s transport minister said on Tuesday (17 November). Volkswagen has said about 1.2 million vehicles in Britain were affected by the scandal.

Passenger car registrations were up by just 2.9% from October 2014 in the EU, a sharp slowdown from the 9.8% rise reported in September.

“The Volkswagen affair may have caused collateral damage. We can’t rule out that the size of the scandal has been such that drivers have cancelled or postponed purchases,” he said.

The global airline industry has committed to carbon-neutral growth by 2020, an ambitious goal given the steady growth of the passenger travel despite global economic and political shocks.

Overall, transport accounts for 23% of greenhouse gas emissions and is growing despite efficiencies, according to the Intergovernmental Panel on Climate Change (IPCC).

The Air Transport Action Group in Geneva estimates that the global aviation industry produces around 2% of all carbon dioxide emissions, and accounts for 12% CO2 emissions from overall transportation sources.

Airbus officials estimate the industry has cut emissions by at least 25% since 2000 and anticipates further improvements in containing carbon output. The replacement of more than 13,000 older, less efficient aircraft over the next 20 years is also expected to play a part.