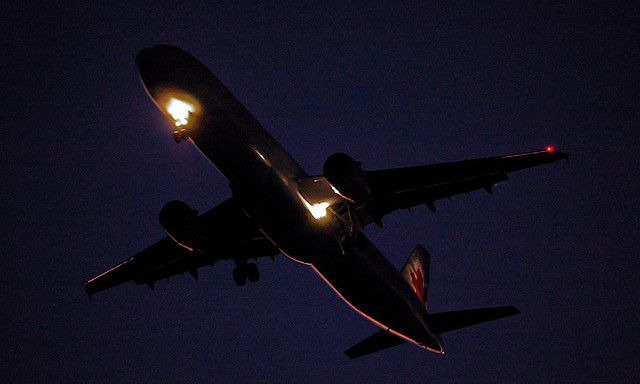 “EU governments continuing to allow commercial airlines to (a) free ride to the tune of €40 billion a year with tax exemptions while their night flights pose serious health risks is nothing short of a scandal," says Susanne Heger. [Doug Zwick/Flickr]

A coalition of 140 organisations met with European Parliament representatives on Tuesday (18 November) to ask for a ban on flights operating at night. It also called on legislators to strip the aviation sector of the tax exemptions it currently enjoys.

The coalition presented MEPs with a petition under the name of Taming Aviation, in which it formally asks the European Parliament to take action.

Aircraft noise, air pollution, and tax subsidies to airline companies are the main concerns of the coalition, which includes communities living outside airport areas.

During the meeting, Taming Aviation co-founder Susanne Heger said that aircraft noise poses serious health threats for people living near airports. According to a study from the University of Bern, the noise increases the risk of dying of a heart attack by 50% and is one of the biggest concerns of those who live under flight paths.

The petition demands that all airports have an uninterrupted eight-hour ban on nighttime flights, in order to comply with minimum health standards.

A German Court ruled in favour of a night flight ban at Frankfurt airport in 2012, in response to complaints from local residents. Taming Aviation hopes for the same result across Europe, and said that unless the EU forces all airports to close down at night, the situation will not change.

“Individual airports are reluctant to ban night flights, because the night flights will go to a competitor airport,” said John Stewart, chair of Heathrow Association for the Control of Aircraft Noise (HACAN).

Coalition representatives have raised these problems with local and airport authorities but have been unsuccessful in finding a common ground. They decided to call on the European Parliament to take these concerns in consideration through amendments when adopting future laws.

Keith Taylor MEP, a Greens/EFA lawmaker from the UK, said that Parliament will revise the Energy Tax and the Emission Trading System legislative proposals in 2016, to allow MEPs to address the coalition’s demands. He also said that legislators will give serious consideration whether to include aviation in the EU’s emissions scheme.

“[The airlines] should pay VAT and excise duty just like all other transport methods, so that all the costs of flying are properly accounted for,” said Taylor MEP.

Under current EU rules, airlines are exempted from paying a tax on fuel and on their revenues. Because of these incentives, Taming Aviation believes the airlines are neither motivated nor interested in reducing their gas emissions.

“With air passenger numbers set to grow 4% a year for the next 20 years, the aviation sector can well afford to pay its way,” said Heger.

“EU governments continuing to allow commercial airlines to (a) free ride to the tune of €40 billion a year with tax exemptions while their night flights pose serious health risks is nothing short of a scandal.”

The Association of European Airlines, however, said the sector receives from €27 to €35 billion per year in annual subsidies, and compared to other transport sectors, such as rail, aviation receives half the amount of subsidies.

While Taming Aviation recognises that air transport makes a significant contribution to the economy, it still needs to be regulated. But if governments cut the airlines’ tax breaks, consumers will no longer enjoy cheap tickets on short-haul flights.

“We are hoping to work with the railway sector to balance the demand in travelling,” said Stewart.

“You will automatically get a modal shift from air to rail, especially for short distance trips, as 45% of all trips within Europe are 500km or less.”

As the petition was handed over to Cecilia Wikström, chair of the Petitions Committee, Stewart said that Taming Aviation wants to use this formal demand “to raise a wider issue with MEPs, the Commission with a view to working with different stakeholders”.

Parliament will now assess the request, and forward it to the European Commission.

Taming Aviation represents a quarter of a million citizens from Austria, Belgium, France, Germany, Italy, the Netherlands, and the UK.

Direct emissions from aviation account for about 3% of the EU’s total greenhouse gas emissions. The large majority of these emissions comes from international flights. By 2020, global international aviation emissions are projected to be around 70% higher than in 2005 even if fuel efficiency improves by 2% per year.

Reducing aviation’s environmental footprint is a priority for the industry. According to the Association of European Airlines (AEA), it aims to do so through the development of “state-of-the art aircraft and engines, of operating measures to reduce fuel consumption in flight, and through better use of its infrastructure and facilities: airspace, airports and air traffic control.”

In addition to these goals, the International Air Transport Association (IATA), another trade group, supports the development of biofuels and other alternatives to improve sustainability and reduce emissions.

IATA supports carbon-neutral growth in the commercial aviation industry by 2020 and supports reducing net aviation carbon emissions of 50% by 2050, relative to 2005 levels.