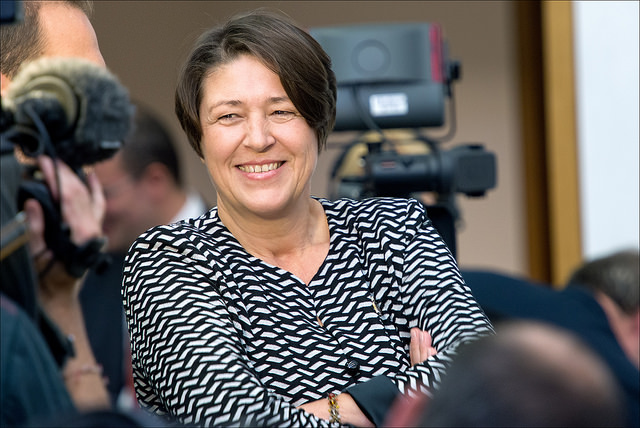 The executive will propose a communication outlining the future EU strategy to decarbonise transport this afternoon. The Commission will also launch draft law, the Effort Sharing regulation, which sets emissions targets for member states in sectors including transport.

Road transport accounts for a fifth of EU carbon dioxide emissions, which must be cut if the bloc is to meet its climate commitments at EU and UN level.

Volkswagen gamed tests for nitrogen oxide, a fix exposed by US regulator the Environment Protection Agency.  It programmed engines to only control NOx emissions in a laboratory test. In real-world conditions the cars emitted up to 40 times more of the harmful gas.

Transport Commission Violeta Bulc told euractiv.com that tests for cars’ CO2 emissions would be bolstered after Dieselgate. The tests will police EU standards to come into force in 2021.

“We have made some very concrete steps after the scandal that we were all exposed to,” said Bulc.

“We have now new testing procedures that have been confirmed. They’re bringing closer lab testing to road testing.”

But unlike the EPA, a central body with independent resources and teeth, tests in the EU will be handled by national regulators.  A car can be certified as compliant in one member state and be sold anywhere in the EU.

The former director of the EPA, the woman behind the enforcement system that snared VW, has said that only a pan-EU supervisor could prevent another Dieselgate. Margo Oge has discussed the idea with Commission officials.

Bulc disagreed but did not rule out the creation of a central regulator in the future.

“If that will be the price to pay probably we will think about it. I hope it won’t be necessary. The rules are very clear. We were awakened by what happened. Let’s hope that this will be enough,” she said.

“But if it is necessary of course – well this is an ever-evolving story – we will make the next step.”

Volkswagen will spend up to €13.2 billion to settle US consumer lawsuits and government allegations but it has escaped fines from the German government.

A public consultation into the new EU Co2 standards for cars and vans post-2020 opens today.  Legislation is expected to follow next year.

The Commission has said it will propose Co2 standards for trucks before the end of its mandate in 2019.

The communication sets out a non-binding “vision” of a zero carbon emission transport sector by 2050.

It pushes alternatives such as car-sharing and multi-modality – different modes of lower carbon transport – as ways to reach that goal.

The strategy calls for a scaling up of low-emission alternative energy sources such as renewables and electrification.  Infrastructure to such alternatives is also planned to be rolled out, with EU financial support.

The European Investment Bank has been tasked with developing mechanisms under the Juncker Investment Plan to, for example, help cities buy electric buses, and spur innovation.

Transport represents 34% of all energy used in Europe. 96% of that energy is based on oil, which makes the bloc highly dependent on imports from countries such as Norway, Russia and Saudi Arabia.

A recent study found that 80% of Europe’s oil imports are supplied by non-EU companies.

The EU’s Energy Union strategy has the twin goals of reducing energy dependence and fighting climate change. It gained political impetus after the Ukraine Crisis violently exposed the bloc’s addiction to Russian gas.

The Commission has now turned its attention to oil, after spending the last two years working on alternative routes of gas supply and better interconnection to wean the EU off its reliance on Russia.

“It is part of our strategic thinking,” said Bulc. “The only real source of energy that Europe has is alternative energy sources. That is why we are readjusting our investments in research and innovation to really push essential elements such as energy storage to really bring balance to the grid.”

Energy storage, new types of batteries for vehicles and propulsion systems would help do that, she added.

High oil stocks are continuing to keep oil prices low. “What we see from an economic sense is that the fluctuation in oil prices has really affected the European economy,” said Bulc.

“The worst thing that can happen in an economical model is that you cannot predict the prices so this will bring stability to that.”

Resources, energy and people were the three most important elements in economic competitiveness, the Slovenian Commissioner said.

“But our strategies are not sensitive to oil prices because we are driven by the goals of greater independence of European energy systems and decarbonisation,” she said.

While emissions from other sectors are generally falling, those from transport have continued to increase until 2008 when transport emissions started to decrease on the back of oil prices, increased efficiency of passenger cars and slower growth in mobility.