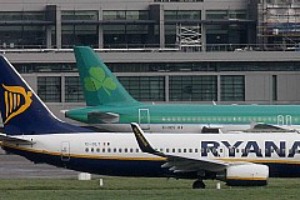 The European Commission, which vetoed Ryanair's first takeover bid for Aer Lingus in 2007, said the no-frills carrier had not offered sufficient concessions to allay concerns about the merged company's dominance or monopoly on 46 routes.

It said the €694-million bid could hurt competition and lead to higher prices for passengers.

"For [Irish and European passengers], the acquisition of Aer Lingus by Ryanair would have most likely led to higher fares," EU Competition Commissioner Joaquín Almunia said in a statement.

"Those proposals [from Ryanair] were simply inadequate to solve the very serious competition problems which this acquisition would have created on no less than 46 routes," he said. The two airlines currently compete on these routes.

The EU antitrust authority said Ryanair's deals to divest some of Aer Lingus' routes to British airline Flybe and British Airways would not have ensured sufficient competition.

Ryanair rejected the Commission's arguments, saying it had proposed an unprecedented and revolutionary package of concessions to allay regulatory concerns.

"We believe that we have strong grounds for appealing and overturning this politically-inspired prohibition," Ryanair said in a statement.

"We regret that this prohibition is manifestly motivated by narrow political interests rather than competition concerns … Accordingly, Ryanair has instructed its legal advisers to prepare a comprehensive appeal."