“Battery technology is very close to a threshold that makes electric trucks feasible and economically competitive. All that is missing is one companion component: fast charging," said Björn Nykvist, lead author and senior researcher at the Stockholm Environment Institute. [EPA-EFE/FOCKE STRANGMANN]

Electric freight trucks will soon be technologically ready to compete with fossil-fuel-powered trucks, but the lack of fast-charging infrastructure will hamper uptake, a new study has found.

Advances in technology mean that battery-powered heavy trucks can go up against their fossil-fuel counterparts on price and – with better charging infrastructure – on range, according to the study, conducted by the Stockholm Environment Institute (SEI), an independent research institute.

“A tipping point is in sight for electric trucks,” said Björn Nykvist, lead author and senior researcher at SEI. “Battery technology is very close to a threshold that makes electric trucks feasible and economically competitive. All that is missing is one companion component: fast charging.”

“If this infrastructure is put in place, it invalidates the old argument that electric trucks can’t match the range of diesel trucks. This makes electric trucks much more realistic,” Nykvist added.

But increases in efficiency mean that smaller batteries will soon be capable of powering heavy-goods vehicles.

However, these lighter batteries will require a robust charging infrastructure to ensure truck drivers can cover long distances – something Europe currently lacks.

“That should be an incentive to the private sector and policymakers alike to start focusing on making sure that fast-charging infrastructure is available,” said Olle Olsson, co-author of the study and senior researcher at SEI.

By 2024, the company predicts, long-haul electric vehicles could have lower total costs than internal combustion engines in markets with modest electricity costs. Charging infrastructure, however, needs a quicker response at the EU level, Scania argues.

“We believe that we need to move away from long decision processes and quickly start the build-out of the electric backbone along the European highway system. It will be crucial for the heavy transport sector to deliver on the goal of the Paris Agreement,” Karin Hallstan of Scania told EURACTIV.

The SEI study evaluated costs, energy use, and the weight of electric trucks, comparing the load capacity and expenses with conventional diesel trucks.

The positive results for e-trucks are based on a scenario in which fast charging enables trucks to travel an average of 4.5 hours before recharging, in line with EU regulations on mandated rests for drivers.

Tiziana Frongia, freight director at green NGO Transport & Environment (T&E), told EURACTIV the “evidence is piling up” that the future of both short- and long-haul trucks is electric.

“The EU should take note and urgently set binding targets to roll out the necessary electric truck charging stations in the upcoming review of the infrastructure law,” Frongia said.

The EU executive has set a target of building one million public recharging points by 2025 across the EU, with three million by 2030.

Environmentally, heavy-duty vehicles are responsible for around a quarter of carbon emissions from road transport, or some 6% of total EU emissions, according to European Commission statistics.

A switch to electric freight vehicles, which generate no emissions if powered by renewable energy, would help to cut this figure, putting Europe on track to meet its carbon neutrality target by 2050.

The European Commission’s strategy for sustainable and smart mobility, unveiled in December 2020, set an objective of having 80,000 zero-emission trucks on the road by 2030.

However, industry has warned that this figure is insufficient to meet the EU’s CO2 targets. The European Automobile Manufacturers Association (ACEA) has said at least 200,000 clean trucks will need to be on the road by 2030 to meet emissions goals.

ACEA estimates around 6.2 million medium and heavy commercial vehicles are currently in operation in the EU. Only 0.04% of these vehicles are zero emission. 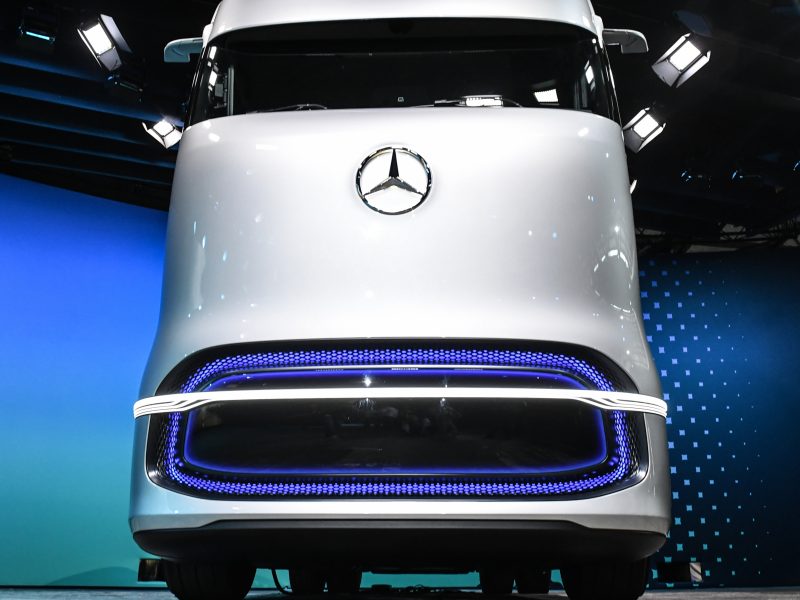 The number of zero-emission trucks on European roads will need to increase from around 2,300 at present to 200,000 by 2030 if the EU’s CO2 targets are to be met, truck makers warn.