EU’s transport infrastructure to be upgraded 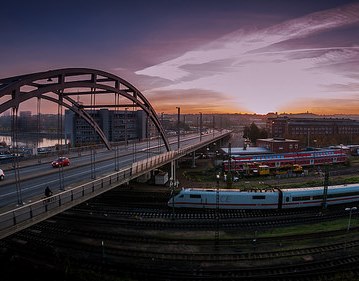 The European transport infrastructure will receive an ample makeover, as the European Commission announces on Thursday (15 January) its transport network priorities.

The new infrastructure, to be completed by 2030, will build cross-border links and develop Europe’s interconnectivity.

“We have to step up our efforts to make sure the core network will be fully operational by 2030, to ensure smooth transport flows for passengers and goods throughout the EU,” said Transport Commissioner Violeta Bulc.

The Commission also expects that the routes, as part of a wider system of Trans-European Transport Networks (TEN-T), will be co-financed with cash input from the private sector.

“After all, the Trans-European Transport Network is crucial for a Union striving for more growth, jobs and competitiveness,” added Bulc.

“This is the first time that tens of thousands kilometres of rail, road, inland waterway connections, ports, airports and other transport terminals have been studied in such a comprehensive way and with a common methodology,” the Transport Commissioner stated.

Each corridor comes with a preliminary list of projects that were specifically chosen in order to develop the EU’s transport network.

For example, the Scandinavian-Mediterranean corridor will be upgraded to “link major urban centres and ports of Scandinavia and Northern Germany”, continuing all the way down to Italy and Malta.

Another initiative will include the Baltic countries and the eastern member states that will see their road and rail transport systems modernised, as well as improved connectivity with the West.

A working plan will accompany the upgrading of each corridor. These strategies, however, will first have to be made available to the public, and will be pending approval from the member states and EU institutions.

The day after announcing its infrastructure priorities, the Commission agreed on Friday (16 January) to co-finance a project as part of the Scandinavian-Mediterranean corridor.

The EU will contribute with more than €1 million to studies on constructing a missing section of a motorway between Sweden and Denmark.

“The studies will come up with an Environmental Impact Assessment, archaeological investigations, design of the road plan, and preparation of parts of the tender documentation prior to starting the construction works,” said the Commission in a statement.

The new portion of the motorway, bypassing Ljungby, in the south of Sweden, is expected to cut down the number of accidents and reduce travel time for the locals.

MEP Jens Nilsson, a Swedish member of the European Parliament’s Transport Committee praised the Commission’s choice for such an investment.

“It was long overdue to get rid of a major bottle neck that has caused many problems over time. But a lot still remains to be done, especially when it comes to connecting the northernmost parts of Scandinavia to the rest of the EU,” Nilsson said.

The TEN-T Programme, established by the European Commission, supports the construction and upgrade of transport infrastructure across the European Union. The projects represent all transport modes – air, rail, road, and maritime/inland waterway – plus logistics and intelligent transport systems, and involve all EU members.