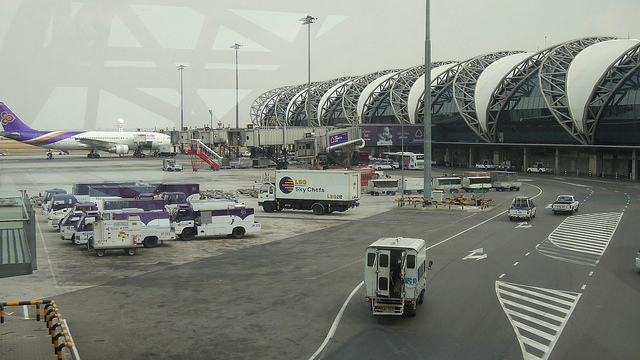 EU regulators on Thursday issued a special warning over travelling on airlines from Thailand but stopped short of following last week’s damaging US safety downgrade for a country heavily dependent on tourism.

The European Commission, the EU’s executive arm, said Thailand would be closely monitored as it updated the bloc’s air safety blacklist.

While “no air carriers from Thailand were added to the Air Safety List at this time … the Commission and European Aviation Safety Agency will however closely monitor future developments,” the Commission said in a statement.

“If the protection of air passengers against safety risks so requires, the Commission could then propose to include one or more air carriers from Thailand in the Air Safety List,” it added. The Commission gave no specific reasons for its action.

US authorities in their decision last week cited a series of shortcomings over “technical expertise, trained personnel, record-keeping, or inspection procedures.”

The ruling was a huge setback to the junta of former army chief turned Prime Minister, Prayut Chan-ocha, who in response blamed successive civilian administrations for failing to tackle safety concerns over the last decade.

The Head of the Delegation of the European Union in Thailand, Ambassador Jesus Sanz, said he was “relieved” at the decision of the EU not to put air carriers from Thailand on the EU Air Safety List.

Sanz it was a “positive decision”, adding, “The European Commission, with the cooperation of EASA, will continue to monitor closely further improvements of aviation safety in Thailand and is committed to give the assistance it can for that purpose.”

Thai Airlines said in a statement, “No air carriers from Thailand were added to the Air Safety List at this time. As such Thai will continue to operate regularly-scheduled flights to Europe.”

The current EU safety list covers 20 countries and some 230 airlines that are banned from flying Europe’s skies.

The decision comes as Bangkok waits on another key decision from the Commission – whether to renew, upgrade or dismiss the current ‘yellow card’ on Thailand’s crucial fish export sector, over long-standing concerns over so-called IUU (Illegal, Unregulated and Unreported) fishing, due to labour abuses and depleting fish stocks. Thailand’s fishing sector is crucial to its economy, accounting for around 40% of world tinned tuna exports.

A ‘red card’ would see a complete ban on imports to the EU. A decision is expected before Christmas.

Last month EURACTIV exclusively revealed that a planned Free Trade Agreement between the EU and Thailand would “never” be ratified whilst the military junta was in power.

Meanwhile, the Thai Supreme Court has barred deposed former prime minister Yingluck Shinawatra from leaving the country to address EU lawmakers. In October Elmar Brok, chair of the Parliament’s foreign affairs committee, in conjunction with Werner Langen, chair of the parliament’s ASEAN (Association of South East Nations) delegation, invited Shinawatra to speak on the political situation in Thailand. She was deposed in a military coup in May 2014, and now faces corruption charges relating to a rice-subsidy scheme.