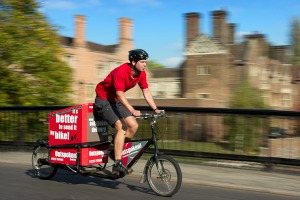 More than 30 companies from across Europe have launched a European Cycle Logistics Federation (ECLF), aimed at improving urban bike deliveries and lobbying for cycle-based delivery policies.

“We will be able to influence and convince stakeholders that freight bikes are a feasible option for delivering cargo in congested inner city areas,” said Rob King, the founder of Outspoken Delivery, a Cambridge, UK-based company that hosted the launch conference.

Cargo or freight bicycles have a wooden carriage or box attached, which can carry weights of up to 250kg, several times the load of an ordinary bike.

They are currently used for urban food and courier deliveries, postal services, airport cargo handling, and warehouse transport. But the ECLF wants to clear the path for the sector’s expansion.

In cities such as Amsterdam, worktrikes are often rented for moving house, product promotions and parties in the park.

The furniture retailer IKEA has also introduced a trailer bike rental service in its Danish stores which gives customers a free form of shopping transport – so long as they can pay a deposit and insurance policy.

"It’s fascinating to be here in the early days of a new logistics paradigm,” she said.

The new federation has developed from the EU-funded cycle logistics project, which gathers key players to promote cycle-based delivery solutions.

Research by the project found that 50% of all light goods, and 25% of all goods, could be moved by cycle.

“Any changes that we can put in place to allow freight to be carried by bike have to be worthwhile,” said Cambridge MP Julian Huppert, a keen cyclist who also attended the conference.

“This idea has the potential to take vehicles off our roads, easing congestion and cutting carbon emissions.”

On several occasions, the then-transport commissioner, Antonio Tajani, said that he would introduce measures to promote bicycling in Europe’s cities in the EU’s Urban Mobility action plan of 2009. However, when it arrived, there were none.

Projects related to cycling have also been funded through the STEER Programme, which promotes more sustainable energy use in transport, and CIVITAS, an EU initiative that helps cities to achieve a more sustainable, clean and energy-efficient urban transport system.