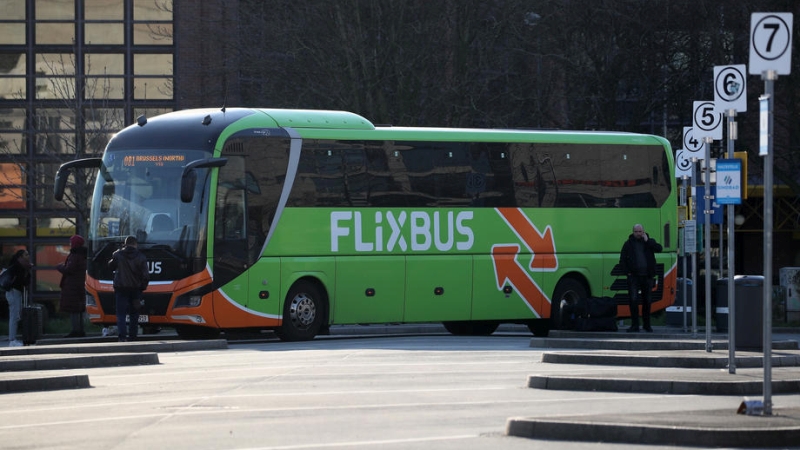 A Flixbus at the main bus station in Dortmund, Germany, 17 March 2020. [EPA-EFE/FRIEDEMANN VOGEL]

German bus transport company FlixBus has renewed calls for countries including Spain, Greece, Hungary, and Romania to open their markets to competition from long-distance buses, arguing that doing so will lower prices for consumers and offer a greener option to traveling by car.

“A competitive market offers more choices for customers and leads to more sustainable mobility options and affordable travel,” André Schwämmlein, FlixBus founder and CEO, said in a statement announcing the company’s expansion to Russia and Brazil.

“We hope that the remaining [EU] countries such as Spain, Greece or Romania will soon recognise the potential of market opening to attract more passengers to sustainable collective travel,” the statement continues.

At present, long-distance buses in some EU member states are banned from operating routes within the country, a move often seen as protecting national rail operators.

In practice, this means that buses may cross the country’s territory, but cannot transport residents between cities within its national borders.

To unify the patchwork of policies across the bloc, the European Commission in 2017 proposed an update to the regulation on cross-border market access for bus companies.

The European Parliament reacted favourably to the proposed legislation, which would have shifted EU countries towards liberalisation, but the Council, which represents national governments, signalled its unwillingness to progress the file, hobbling the process.

The organisation told EURACTIV that it is in favour of further liberalisation of the transport market “where it provides for an open and fair competition that brings more choices to customers”.

“In addition, the benefits of sustainable transport should be considered [as] liberalisation may also address decarbonisation of the road transport sector,” an IRU spokesperson said via email.

The organisation stressed, however, that “increased competition should not hurt the interests of passengers,” citing the need to protect public service contracts that operate on some routes.

But calls for liberalisation were strongly rejected by the European Transport Workers’ Federation (ETF), which said that opening transport markets leads to “undesirable, unfair competition between modes” which worsens working conditions.

Cristina Tilling, head of land transport with ETF, said an assessment of Germany’s decision to open its market to long-distance buses in 2013 showed “a sharp increase in non-compliance with working hours by bus and coach drivers”.

The move will also divert money to profitable routes at the expense of routes that connect remote areas, which “goes away from the concept of public service and regional connectivity,” according to Tilling.

“We do not believe that [liberalisation] is a good move. It doesn’t serve a good mobility network,” she told EURACTIV.

ETF also questioned FlixBus’s sustainability claims, asserting that their own surveys show that most drivers do not choose to take long-distance buses in place of their car.

“A car user will not be motivated to take a bus or a coach just because there is the bus or coach operating there,” said Tilling.

FlixBus rejected ETF’s survey findings, citing a study by the German Federal Environmental Office (UBA) which found that 36% of long distance bus passengers would have traveled by car otherwise.

The renewed appeals to those EU countries resistant to opening their long-distance bus market comes as FlixBus, which positions itself as a mobility tech company, expands to Russia and Brazil.

Brazil will open its bus market to competition by the end of 2021, at which point FlixBus will run services connecting major cities.

In eastern Europe, the company intends to join cities in the Baltic countries with Russian cities. Already a route is planned to connect the Estonian capital of Tallinn with St Petersburg.

In addition to Europe, the company operates in the United States, where it is the second most popular bus service behind US-based Greyhound.