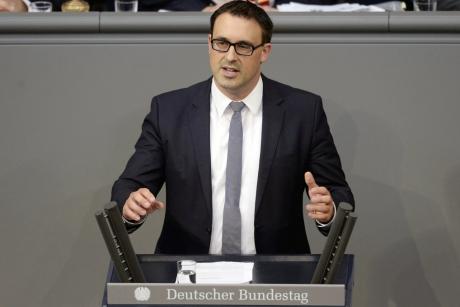 “We should not let ourselves be pushed into this by anyone,” said the vice faction head of Germany’s Social Democratic Party (SPD), Sören Bartol on Thursday (26 February) at the first consultation over the toll in the Bundestag.

There are doubts, he said, regarding expected revenues, data protection and over whether it will discriminate against foreigners.

“The proposed bills present many more questions,” Bartol said, reacting to the government’s plans to finalise the law by the end of March.

“We are starting a new chapter in infrastructure financing and are accomplishing a real system changeover,” Dobrindt indicated.

Oliver Krischer , vice faction chief for the Green Party in the Bundestag, spoke of a project from a regional party, that belongs “on the rubbish heap of stupid CSU projects”.

The toll law includes plans to require all highway (Autobahn) users to pay the fee. For domestic car owners, it also formally applies to federal roads.

But automobile owners registered in Germany are expected to be relieved of the tolling fees through the motor vehicle tax.

Under the new law, German car owners would automatically have to buy a toll road sticker valid for one year, while foreign drivers could also buy them for ten days (€10) or two months (€22).

On average, the fee for one year would be around €74. Dobrindt plans to collect the toll starting in 2016.

At the same time, the EU may consider the toll a discrimination against foreign car drivers and could stop the plan with legal action. The Commission has said it will not comment on this until the law has been passed.

“We Social Democrats take these concerns very seriously,” said Bartol. He indicated that the passenger car toll was a compromise in the coalition agreement. “As a result it will come, the question is only how,” he stated.

Demands from Germany’s Federal Council must also be taken seriously, he indicated, which called for mandatory approval Chamber of States. But the German government is against this. In a position statement, the Federal Council already rejected the bill with a significant majority.

But according to Bartol, it must be made clear that if an EU suit against relieving German car drivers of the toll’s burden is successful, the result will not be a burden for all.

In addition, the ministry’s revenue calculations should be checked again, he said. The toll should only come if it will actually bring additional resources.

After deducting monitoring and administrative costs, Dobrindt calculates around €500 million annually. The estimate is viewed sceptically from many sides as being too high.

For many years, the Christian Social Union (CSU) which is the Bavarian sister party of Merkel's CDU, has been requesting that higher road tolls be introduced for foreign cars using German roads. But such plans have been rejected by the European Commission multiple times, on the grounds that preferential tolling amounts to discrimination based on nationality.

During the latest coalition negotiations late last year, head of the CSU Horst Seehofer insisted that a toll on foreign cars be included in the final agreement. In the coalition agreement, the new German government promises to introduce "a motor vehicle toll in compliance with EU law, by which owners of cars not registered in Germany would help finance additional spending on the highway network. Cars registered [in Germany] should not suffer higher costs."