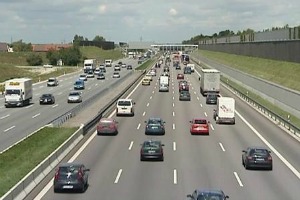 The European Commission has rejected a German plan to introduce road tolls that would provide discounts for German drivers, resulting in higher costs for foreigners. German conservatives insist that such a plan is "fair".

Under the coalition agreement of the new cabinet of Angela Merkel, Germany is to introduce for the first time a road tax for cars through vignettes. But the form it will take is still unclear.

The tolling issue is just one more area creating divisions in Germany's grand coalition. The Social Democrats (SPD) predict minimal financial benefits from such a toll. But a bigger problem is the insistence of Merkel's Christian Democratic Union (CDU) and its Bavarian sister party, the Christian Social Union (CSU), that there should be rebates for German drivers.

Despite recent calls from Commissioner Siim Kallas to drop plans for a road toll discount for Germans, the ruling Christian Democrats are determined not to overburden the nation's drivers.

Arnold Vaatz, a Bundestag representative of the CDU, told euractiv.de that he saw the toll issue more as a question of fairness. Many neighbouring countries also charge fees for drivers – including Germans – to use their roads, Vaatz explained. Conversely, it is only fair that foreign drivers also contribute to the transportation infrastructure in an important transit country like Germany, he added.

If the German government then decides to refund the greater financial burden to German citizens through a reduced motor vehicle tax they should be able to do so, Vaatz argued. But in his view, the decision should apply solely to the Federal Republic.

"That does not concern the EU", he said.

Kallas, the EU commissioner for transportation, has rejected new plans for tax rebates in Germany, Germany's daily Bild reported on Tuesday (7 January). "There should not be any free vignettes or rebates for German-registered cars alone,” Kallas said.

Commissioner Kallas said he was open to a certain level of differentiation related to emissions classes. "But this would have to apply to all cars, regardless of the country in which they are accepted," said Kallas.

Vaatz said that toll fees must result in a substantial added benefit for infrastructure financing. "We're not talking about something like €100 million per year", Vaatz explained. It would have to be at least €800 million or, even better, €1 billion in added revenue to pay for German roads, said Vaatz.

But he admitted he was not certain whether or not this financial threshold was actually realistic. Vaatz said he personally believed that rising such amount would be very difficult.

"Something that costs more than it brings in is out of the question. Period," Vaatz told euractiv.de.

If the toll fails, he said, increasing the fuel tax would be a viable alternative. While this would probably create additional costs for German drivers, at least it would be proportional to fuel consumption.

For the time being, the CDU seems to support plans by transportation minister Alexander Dobrindt from its sister party, the CSU. Earlier this week Dobrindt introduced his latest plan to make foreigners pay more to use German roads. The new plan, would give Germans a tax rebate proportionate to emissions. But it is still unclear how the rebate system could be transferred to foreign car drivers.

Kallas' spokesperson Helen Kearns said on Tuesday that non-discrimination of foreign nationals towards German residents was a necessary condition also with regard to the suggested plan for a rebate proportional to emissions.

MEP and transportation spokesperson for the Greens Michael Cramer said:

"It is high time that [Kallas] use European law to put a stop to Dobrindt's mind games."

At the end of October, Cramer sent a request to Commissioner Kallas criticising the CSU toll plan. At that time he made it clear that "discrimination on the basis of nationality is prohibited". Cramer also doubts the toll's financial value. Complying with EU law without placing an additional financial burden on German drivers is like "trying to square the circle", he said. If foreign drivers were also given rebates, according to Cramer there would be even less revenue from the toll.

The revenue from a toll on foreign drivers would be ridiculously low and not worth the administrative cost, he said. Dobrindt and Bavarian Premier Horst Seehofer (CSU) are aware of this fact, the SPD politician added. "Ultimately, they want to introduce a motor vehicle toll for everyone," Groschek said.

The Christian-Social Union (CSU) which is the Bavarian sister party of Merkel's CDU, has been requesting for many years that higher road tolls be introduced for foreign car drivers, using German roads. But such plans have been rejected by the European Commission multiple times on the grounds that preferential tolling amounts to discrimination based on nationality.

During the latest coalition negotiations late last year, head of the CSU Horst Seehofer insisted that a toll on foreign drivers be included in the final agreement. In the coalition agreement the new German government promises to introduce "a motor vehicle toll in compliance with EU law, by which owners of cars not registered in Germany would help finance additional spending on the highway network. Cars registered [in Germany] should not suffer higher costs."