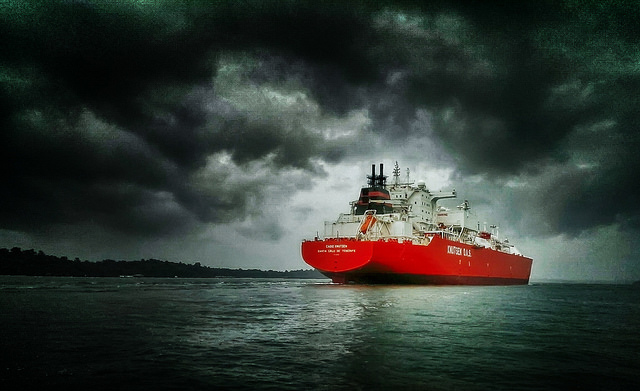 The EU is financing the construction of a ferry that will run on alternative fuel. [Zachary Esni/Flickr]

The European Commission is giving €4 million to two German companies for the construction of a liquefied natural gas (LNG) ferry and a fuel station in the North Sea, it announced Tuesday (4 October). The project could increase the number of ships using LNG in future.

The new ship will run entirely on LNG once the project is finalised at the end of 2015. While there are ships that use LNG in Europe, their number is limited due to the lack of fueling stations which provide the gas.

LNG is considered an alternative to heavy oils, as it does not emit sulphur dioxide that pollutes waters. It also produces far less carbon and nitrogen emissions, which are greenhouse gases that warm the Earth’s surface and forces the climate to change.

“LNG is a compelling option for ships to comply with the upcoming law limiting marine sulphur emissions in the North and the Baltic Seas. This fossil fuel can help in the transition towards clean operations for ships,” said Sotiris Raptis from Transport & Environment, a climate NGO.

“But LNG is not a silver bullet for the industry, because it’s still a fossil fuel that releases methane, a powerful global warming agent,” Raptis added.

According to the European Community Shipowners’ Association (ECSA), the majority of ship owners have made efforts to comply with the new rules. Companies have four methods to choose from when bringing their ships up to date.

They can use a bunker fuel with a maximum sulphur content of 0.1%, abatement technology such as scrubbers, LNG fuel, or methanol as an alternative fuel. The use of LNG is one of the least used options.

The building of the German eco-friendly ship, and an LNG fueling station, could increase the number of vessels using it in the region. The project, though, will not be finalised before the sulphur law enters into force, which means ships will resort to other fuels to reduce their emissions.

Despite this, the Commission said that the new ferry will relieve traffic in the area and move faster compared to conventional ships. It will be built on an innovative concept and design. The outcome of the project will serve as a best practice example for other ship owners, said the Commission.

Transport & Environment, however, disagrees that such a project is the best example to follow and promote in the future.

“EU funding should be used in line with the overall EU climate targets and be channeled properly so that it helps decarbonise the transport sector and not subsidise another fossil fuel.”

The €8 million ferry, which will run between Heligoland and the German mainland, is co-financed by the Commission TEN-T programme. As the biggest EU’s transport policy instrument, TEN-T helps maintain and improve the EU’s infrastructure, by supporting green projects like the German initiative.

The European Commission adopted in 2011 a roadmap with 40 concrete initiatives on how to build a competitive transport policy. The document suggests ways on how to increase mobility, remove major barriers in key areas and fuel growth and employment. These initiatives aim at reducing Europe's dependence on imported oil and cutting carbon emissions in transport by 60% by 2050.

The Sulphur Directive, is one of the initiatives that will help reduce air pollution coming from the maritime sector. It obliges all Member States to take all necessary measures to ensure that ships do not use marine fuels with a sulphur content exceeding 0,10 % starting with 1 January 2015.

The shipowners industry has two more months to comply with the new rules.