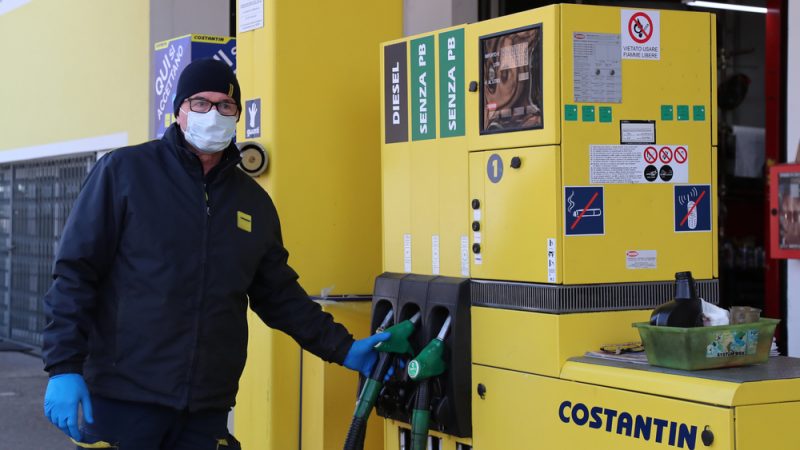 Italy’s government is trying to broker a deal to head off a move by petrol station operators to close down pumps on the country’s motorway network due to the coronavirus epidemic.

In a statement on Tuesday (24 March), three operator associations said they would shut down their motorway station networks on Wednesday night, claiming it had become impossible to guarantee health safety standards and keep businesses going.

They said other pump stations elsewhere across the country would then gradually close down too.

Italy has been hard hit by the coronavirus outbreak and has had more fatalities than any other country.

With a virtual lockdown in place to try and slow down the spread of the contagion, travel bans have reduced road traffic to a shadow of what they were before the outbreak emerged in Italy’s northern regions on 21 February.

In a joint statement, the three associations said the 100,000 people who manned the nationwide networks should be seen as neither heroes nor guardian angels.

“But no-one can think of continuing to treat us like slaves,” they said.

In a statement later on Tuesday, Rome said the Transport and Industry ministers were looking to broker a deal between motorway operators and the service station networks to avoid pumps being switched off.

The move is aimed at guaranteeing the free movement of freight and transport which are seen as being of essential public interest.

On Sunday, the government ordered non-essential businesses to close until at least 3 April but said others in strategic sectors should keep working.

The transport ministry said, at the request of the ministers, the motorway concession owners had agreed to accept a series of measures including a temporary suspension of contractual dues and cleaning of forecourts.

The pump operators will also be able to agree different opening times with the motorway concessionaires in line with traffic volumes.

“In any case self service supplies must be guaranteed,” the ministry said.