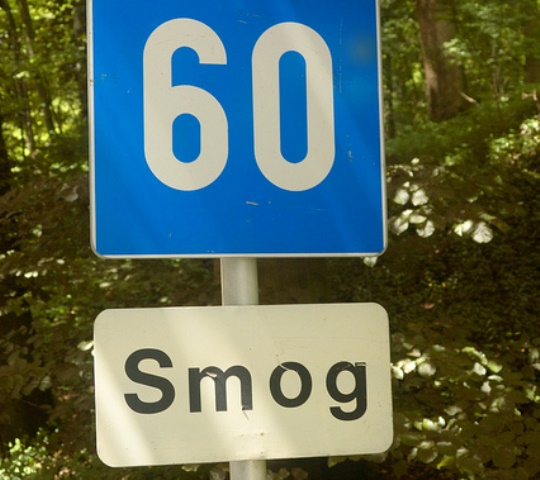 Luxembourg and Lisbon have come last in a ranking of European cities, which rates efforts to fight air pollution caused by transport.

Zurich topped the Sootfree Cities ranking, which grades the efforts of 23 cities in 16 countries to improve air quality. Copenhagen was the runner-up.

Berlin was the winner in 2011, the last time the ranking was published by the European Environmental Bureau and Friends of the Earth Germany. It slipped to fifth this year. London and Paris were equal, at sixth place.

There are 400,000 premature deaths in the EU every year because of air pollution, which kills ten times more people than road accidents. Swiss air quality standards are far stricter then those in the EU.

The report showed progress in cutting back dangerous PM10 (Fine Dust) particles and nitrogenic oxide concentrations in the air.

“Although 90% of Europeans living in cities today are still breathing unhealthy air, Copenhagen, Stockholm, Vienna (and) Berlin have either met, or are due to meet, the EU limit values within the next two years,” Arne Fellermann, transport policy officer at Friends of the Earth Germany, said.

Researchers concentrated on measures put in place over the last five years and looked at air quality plans for the next five. They looked at categories such as the promotion of sustainable transport, traffic management, public procurement and other parts of the policy mix.

Cities across Europe were fighting air pollution because of the EU’s air quality standards, said Fellermann, but there was not enough action at EU level.

Louise Duprez, senior policy officer for Air Pollution at the European Environmental Bureau said,  “Cities can do a lot to improve air quality, but they are left exposed to some pollution they can’t control. This includes pollution which comes from outside the city, like emissions from agriculture or industry.”

The EU’s overall air pollution limits for 2020, 2025 and 2030 needed to be tightened, the campaigners said. That would cut long-distance pollution, which cities are helpless to deal with.

The limits, part of the National Emissions Ceilings Directive, are currently being discussed by policymakers. Members of the European Parliament will debate the limits ahead of a vote in mid-July.

Other legislation should reflect the emissions of road vehicles under real driving conditions and introduce strict norms that limit emissions from construction machinery, according to the NGOs.

Zurich and Copenhagen had substantially reduced the number of cars in their cities. Restrictions on highly-polluting vehicles and construction machines were introduced.

Cleaner forms of transport, such as cycling and walking, were pushed by city policymakers, the report by European Environmental Bureau and Friends of the Earth Germany, said.

But Luxembourg was a “highly car centric city with a staggeringly high shares of 72.5% car or motorcycle use.”

It had not introduced any low emission zones or a congestion charge, despite an OECD recommendation to do so.

Lisbon has high pollution levels consistently above EU limit values.  Although it introduced a low emission zone, there was virtually no enforcement until 2014.

Watch this video about levels of air pollution in Brussels’ EU quarter. Brussels was ranked 14 on the list.