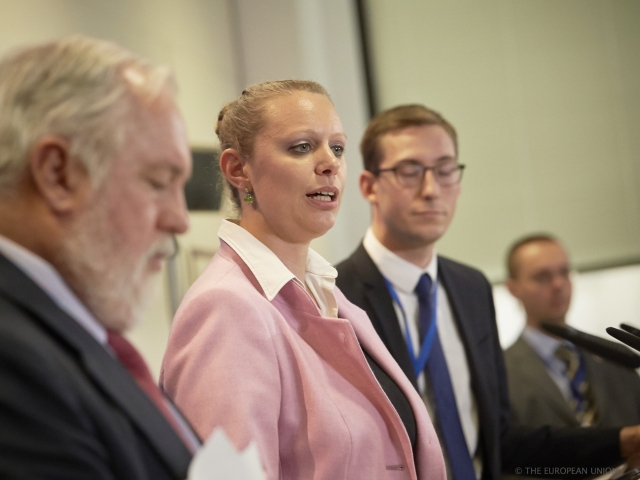 Luxembourg was today (22 September) criticised by campaigners for leading talks about the UN Climate Change Conference in Paris this November, while having the highest per capita fossil fuel subsidies in the European Union.

At €3,415 per person every year, Luxembourg’s fossil fuel subsidies are nearly €1,000 higher than the next worst country, Bulgaria, at €2,479, according to International Monetary Fund (IMF) research.

Luxembourg’s Environment Ministry rejected the IMF study’s definition of inefficient taxation of fossil fuels to subsidies. “It is worth pointing out that, contrary to other countries, Luxembourg does not directly subsidise fossil fuels and respects the tax directives,” a spokesman told EURACTIV.

Subsidies of fossil fuels are criticised because they encourage pollution that leads to global warming. The UN Climate Change Conference (COP21) will try to find a worldwide agreement to cap global warming.

The IMF study showed that low taxation of fuel is Luxembourg’s highest fossil fuel subsidy, while European Commission research has found that the country is Europe’s worst performer on carbon emissions.

Luxembourg took over the six-month rotating presidency of the EU in July. Last week, it successfully brokered a deal between EU environment ministers over the bloc’s negotiating mandate for COP21.

The country will still be at the helm during a last round of preliminary climate talks and when EU negotiators travel to Paris on 30 November.

NGO Green Budget Europe brings together civil society, government and research institutions and campaigns to shift taxation away from labour and onto polluters.

Director James Nix said, “To retain its credibility, and maintain that of the EU, Luxembourg needs to cut its fossil fuel subsidies before it enters December’s climate change negotiations.”

That was strongly denied by Luxembourg’s Environment Ministry. “Under the presidency of Luxembourg’s Environment Minister Carole Dieschbourg, the Council has reached an agreement on a strong, ambitious and responsible European mandate that will allow the European Union to show leadership and to facilitate a global agreement that is acceptable to all,” a spokesman told EURACTIV.

“The government will take its responsibility when implementing the Paris outcome. It is worth mentioning that a previous major development in international climate politics – the Kyoto Protocol – was also achieved at a time when Luxembourg was assuming the presidency of the Council of the European Union.”

Instead of hitting a 20% emissions reduction target for 2020, Luxembourg is on course to increase emissions by 3%, according to European Commission data.

Luxembourg’s Environment Ministry told EURACTIV it “fully adheres” to the EU 2020 targets and had taken “decisive measures” to achieve them.

The latest data showed the country was on track for its EU CO2 reduction target, the ministry said.

The alleged emissions shortfall is partly blamed by the Commission and campaigners on Luxembourg’s very low tax on fuel, which attracts traffic from across the bloc to the country to fill up cheaply.

Domestic transport accounts for just 20% of Luxembourg’s total fuel sales, according to the Organisation for Economic Cooperation and Development (OECD).

Luxembourg has been told to raise its fuel taxes by the OECD, International Energy Agency, the Commission and others for more than a decade.

“Luxembourg is unjustly enriching itself,” said Green Budget Europe’s Nix. It makes €1,400 per citizen every year because of low fuel tax rates, revenue that is then denied to its neighbours, he said.

But Luxembourg’s Environment Ministry said Green Budget Europe’s figures did not take into account the daily influx of about 165,000 commuters, that are an integral part of the country’s economy butare not counted among its residents.

Preliminary results of an independent study commissioned by the Luxembourg government challenge the assumption that a lot of trucking routes would be diverted just to benefit from attractive fuel prices, the ministry added.

“Unless it undertakes reform, Luxembourg will remain a worst case example when it comes to energy taxes”, Nix said.

A recent Oxford University paper said fossil fuel subsidies were a major contributor to at least one quarter of climate warming pollutants emitted in the 30 years to 2010.

After Luxembourg, the member states with the next highest subsides according to the June IMF report are Bulgaria, Czech Republic, Poland and Denmark.

Bulgaria, the Czech Republic and Poland subsidise coal heavily. In Bulgaria’s case, the massive subsidies had made energy prices there the lowest in the EU, while making its energy use on the highest in the bloc. 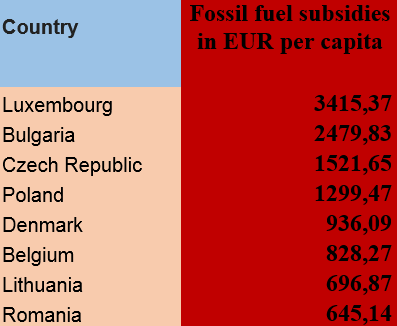 The call on Luxembourg to tackle its subsidies comes the day after the OECD said there was “ample room” for major nations to further cut public support for dirty fuel to the tune of about €178 billion a year.

Reductions in damaging subsidies for oil, coal and natural gas would reduce air pollution, save cash and help a shift to greener energies before the COP21, the OECD said.

Luxembourg is the current holder of the six month rotating Presidency of the EU. That means it chairs negotiations on EU policy and law on behalf of member states. It holds the presidency in the run-up to the UN Climate Change conference in Paris, which aims to cap global warming.