The greening of the airline industry 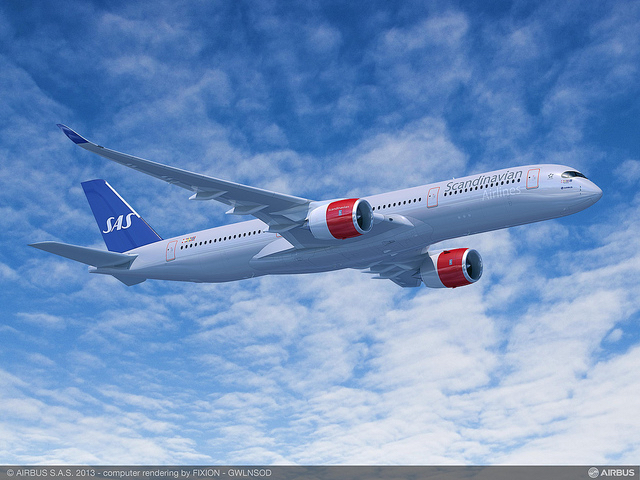 The new Airbus A350 XWB, which was designed, in part, to address environmental concerns. [University of Salford Press/Flickr]

The airline sector is trying to lessen its carbon footprint. In mid-June, the Paris Air Show will host the COP21 seen from the sky conference. Boeing and Airbus are concentrating their commercial efforts on the environment, which is now a selling point. EURACTIV France reports.

“CO2 affects our ability to grow,” said Jonathon Counsell, Head of Environment for British Airways, during a day dedicated to the environment organised by Airbus at its Toulouse site.

Airlines make up 2% of worldwide CO2 emissions. But the doubling of passengers every 15 years has made it a growing source of greenhouse gases. Due to the strong link between the sector and fossil fuels, reducing its CO2 emission is a challenge. The problem of electricity storage rules out its use in the air, which thus leaves airline manufacturers, which have promised to stabilise their CO2 emissions by 2020, with few options.

A need for liquid energy

“We are forced to use liquid energy, whether it be petrol or biofuel. But biofuels must be a priority for the aviation industry,” believes Eileen Van Den Tweel, Head of Innovation at KLM.

In comparison with pure kerosene (jet fuel), using biofuels would represent a 50 – 80% reduction in CO2 emissions, depending on the composition of the biofuel.

Following long discussions over the merits of using land as a source of energy, the European Parliament recently decided to limit the use of biofuels to 7% of energy to be used in the transport sector, in comparison with the current figure of 10%. The policy is designed to avoid deforestation.

For the aviation industry, biofuels represent the only feasible alternative to petrol. The industry has resorted to using recycled cooking oils, as well as sugarcane, and other plant-based fuels.

But the price is exorbitant: 2.5 to 6 times more expensive than the price of a conventional fuel. The industry is also considering research on other liquid fuels, such as biomass or domestic waste, which have not moved beyond the research stage.

Facing such intrinsic fuel-related problems, the aeronautics industry has looked at other more promising possibilities, beginning with that of energy efficiency.

There is no lack of ideas on how to enhance performance, in particular with regards to improving the aircraft. The use of metallic elements has been in decline in favour of utilising lighter composites. As such, the most recent Airbus, the A350, is made up of more composites (53%) than metal. Manufacturers are also looking at the interior design of the aircraft in order to minimise CO2 emissions per passenger.

“It is not about packing in passengers like sardines. On the contrary, we are modifying the ergonomic design of the plane so that passengers will have more space,” explained Charles Champion, the Vice-President of Engineering at Airbus.

The European company is also installing small “shark fins” or “sharklets” at the end of the wings on existing planes and on all new ones. Specialised sawtooth linings are also attached to the fuselage in order to reduce friction.

Yet it is the engine upon which the hopes of reducing emissions rest the most. A new type that will be unavailable until 2025, with external blades, could reduce fuel use by 20%.

The issue of flight paths

The evolution of flight paths represent another potential energy-saver. The latest Airbus benefits from software that allows the plane’s descent to be calculated in two phases. Through incorporating the changing winds according to the different altitudes, consumption is reduced by the largest amount possible. But it is especially with air traffic management where improvements are believed to be possible, specifically over the issue of air congestion.

“If Heathrow Airport asks us to wait 20 minutes before we can land, our efforts throughout the voyage have been more than cancelled out,” says Champion. Air traffic management will therefore be the leading source of energy efficiency.

“There are some great ideas in theory … for example, we could have planes land in a line, one following the other in order to benefit from the stack effect. But … there would have to be only 20 metres of gap between them! Technically, it is doable, but is it really realistic on a plane with passengers on-board? I don’t think so,” comments Franck Chapman, the pilot of Airbus’ latest experimental plane, the A350 XWB.

With a long track record of being opposed to the aviation industry’s participation in the European carbon market, put in place at the start of 2014, airlines have resigned themselves to their lot.

“We are a globalised industry. It is ridiculous to put in place a local market which creates serious market distortions and which was poorly organised,” believes Mark Watson, Head of Environmental Affairs at Cathay Pacific Airways, while also recognising that the experience “allows the sector to plan more effectively for the global carbon market, which will come into being in 2020”.

The European carbon market only deals with short and medium-haul flights, yet certain airlines refuse to comply with it. These include Air India, Air China, Aeroflot and Saudia, which was fined by Belgium.

The airline sector, like the maritime sector, has its own UN agency, the ICAO, which is responsible for organising the reduction of its CO2 emissions, a situation that NGOs criticise as non-effective. “The discussions are progressing, but very slowly. The sector insists on being able to offset its emissions against emission reduction projects, but very precise criteria must be put in place so that the market can restart,” explains Bill Hemmings of Transport & Environment.

The Clean Development Mechanism, developed by the United Nations, is essentially dead. With no demand, the roughly 20,000 projects that were developed to save carbon in developing countries were for the most part abandoned.

Although reviving the Clean Development Mechanism risks being complicated, it is however crucial. The potential carbon savings could make up more than one third of CO2 emission reductions, which the sector agreed to enact by 2050. This would represent a 75% drop in emissions from 2000.

0 responses to “The greening of the airline industry”