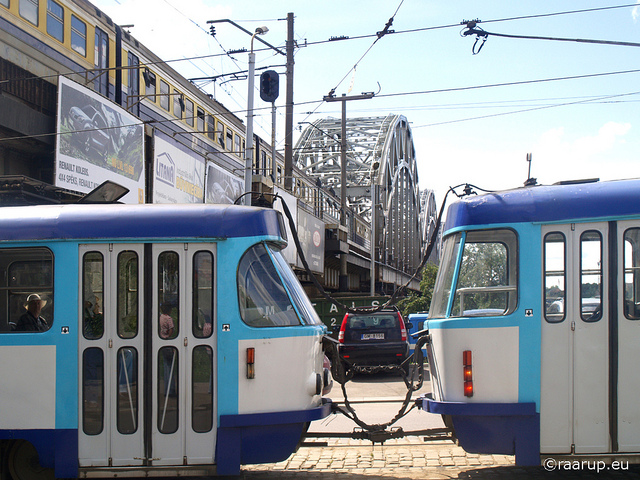 More EU regulation could bring billions to transport sector in the next decades. [Finn Frode/Flickr]

The EU transport sector will lose €8.6 billion every year if it doesn’t address legislative gaps and market inefficiencies in the next two decades, a new European Parliament study found.

The Cost of Non-Europe in the Single Market in Transport and Tourism report warns that the transport industry risks becoming uncompetitive and will miss out on important gains if the EU holds back from liberalising the market.
The publication coincided with new Transport Commissioner Violeta Bulc, assuming office, on 1 November.
As the new Commissioner, Bulc has 100 days to shape the EU transport policy agenda before presenting her initiatives to the European Parliament and the Council of the EU.
The study analyses what has been achieved up until now in the transport sector, and presents the areas that need further liberalisation through EU laws. It also estimates the losses the EU will incur without further EU regulation.
According to the report, road, rail, and air transport has been progressively restructured in the past, but “20 years of regulatory actions have not created a sufficiently open market”.
Industry’s resistance, and a slow implementation of the EU rules by member states in national legislation, have left loopholes. It also created barriers for the smooth functioning of a single European transport market.
The European rail sector, for instance, saw the establishment of a European Railway Agency among other EU rules. But even if the institution helped establish common rules on safety, and eased the exchange and use of information across the EU, two big obstacles remain.
First, European trains find it difficult to move freely across borders due to current rail infrastructures. For example, a train crossing from Austria to Italy has to stop at the border and adapt to new signaling rules by adding tail lights or reflective boards. This costs time and money.
Different gauges, or the electricity systems trains are connected to, represent more barriers that need to be dealt at the European level, the study claims.
Second, many companies cannot enter the market because of administrative limitations. Member states protect the national railways companies, which hold “a monopoly position in many domestic markets”. The lack of competition results in inefficiencies and low quality services for consumers.
The European Rail Industry (UNIFE) has voiced the same concerns as the policy experts in the study. “The Market opening and liberalisation must be pushed further in order to allow rail transport to develop its potential and compete with other transport modes,” UNIFE stated in a press release.
The situation in road transport looks better. But even if the sector has the most harmonised rules at the EU level, it still encounters obstacles. The study describes road transport as “the largest single emitter of greenhouse gas and polluting emissions in the EU”. Moreover, the number of fatalities occurring on EU roads is still high.
Poor social and employment conditions for drivers are as big of a problem as the road pollution and safety standards.
Currently, many companies use drivers who falsely claim being self-employed in another member country. This created “incentives for transport companies to adopt dumping practices”, and worsen the conditions for all of them across the EU.
The experts estimate that if all these loopholes are addressed and covered by EU actions, completely integrated road and rail sectors would bring at least €70 billion to the EU economy in the next two decades.
European airspace’s pace of liberalisation has been very slow, and remains still very fragmented, the study found. The EU will lose if it doesn’t complete the Single European Sky, an EU programme which helps improve the EU air traffic.
“The absence of a single integrated European airspace […], results in aircrafts flying unnecessary detours rather than direct routes and suffering from air traffic delays, which as a significant economic and environmental cost,” according to the policy experts.
The study said, the transport sector could have an “improved mobility, better environmental sustainability, enhanced internal cohesion, and international competitiveness of the EU”, if these obstacles will be addressed on the European level.

The European Commission adopted in 2011 a "Roadmap to a Single European Transport Area -Towards a competitive and resource efficient transport system", which compiled 40 concrete initiatives for the next decade. The initiatives were meant to increase mobility, remove major barriers in key areas and fuel growth and employment.  The roadmap also set goals together with concrete initiatives to reduce Europe's dependence on imported oil and cut carbon emissions in transport by 60% by 2050.

While a lot has been achieved in the transport sector, further EU actions are necessary to take advantage of the full potential of a fully liberalised transport market, as it is also stated in an European Parliament study.