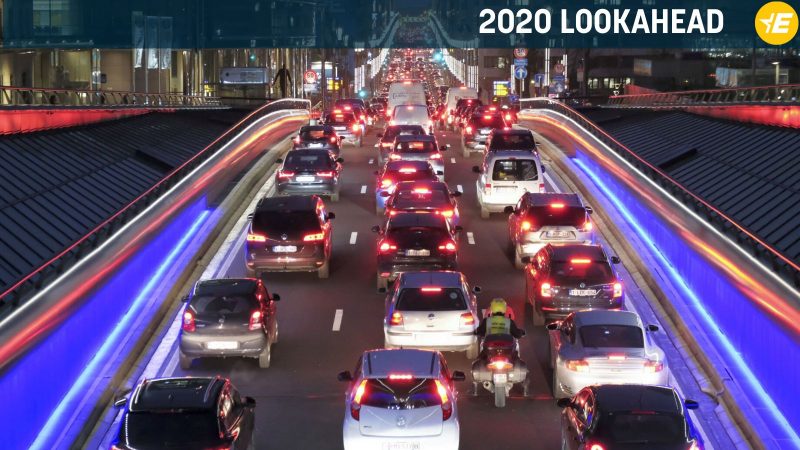 Transport faces a packed 2020, both in terms of policy and politics. The new European Commission of Ursula von der Leyen published its Green Deal for Europe before Christmas and the measures contained within are set to influence the transport sector quite substantially.

But the existing legislation and political decisions that pre-date the EU’s new flagship policy will also carry over into next year.

Here are five of the issues to look out for.

As part of early December’s Green Deal announcement, von der Leyen’s new executive revealed that the Commission will revise CO2 standards for cars and vans, with a view to ensuring “a clear pathway from 2025 towards zero-emission mobility”.

Standards for the next decade were only given the green light by EU negotiators late last year, so the decision to already reopen and review the legislation is a politically brave move by the new administration.

However, it remains to be seen whether the review will change the CO2 reduction targets, currently set at 37.5% for cars and 31% for vans, or whether the update will focus on more technical aspects like methodology and exemptions.

EU officials have confirmed though that they envisage CO2 output to reach zero in the 2030s.The current target for after 2021 is 95g per kilometre, so it looks likely that a serious legislative tune-up may be needed.

The Green Deal pledges to revise the rules by 2021, so next year will be a bitter fight between institutions and stakeholders over the direction in which the review should go.

Before the Green Deal saw the light of day, the Emissions Trading Scheme (ETS) held the title of the EU’s principal tool to fight climate change and a solid year of a rising and stable carbon price boosted its credentials.

But the ETS is, according to several green groups, incapable of driving significant emissions reduction because it does not cover enough sectors.

Two of the most glaring omissions from the emissions system are international aviation and shipping, both of which are regulated by UN bodies. Maritime is now firmly on the radar though.

According to the Green Deal, shipping will be included in the ETS and officials in the Commission’s transport division have told EURACTIV that work has already started on how to do that.

German MEP Jutta Paulus (Greens) is even confident that a deal on the policy measure could be done in 2020, while her Socialist Democrats counterpart Miriam Dalli recently told Green Deal chief Frans Timmermans the Parliament is ready to work with the Commission on it.

International aviation is unlikely to be given similar treatment, however, as the EU’s commitment to a UN offsetting scheme, known as CORSIA, is already making life difficult for policymakers.

CORSIA’s rules say that it must be the only global system used to price aviation emissions and although the ETS only includes intra-EU flights, airlines have already cast doubt on whether the two systems can co-exist.

The UN system is due to enter a pilot phase in 2021 so next year is predicted to be used to make final tweaks to the scheme, authorise offsetting programmes that airlines can pay into and iron out any political uncertainties that still exist.

At EU-level, member states will also have to broach the subject of aviation taxation, after a significant coalition of countries called on the Commission to start pricing plane travel more in line with other climate goals.

Advocates of a tax on jet fuel, which currently enjoys a derogation from levies, say it is the only feasible way of making aviation pay its way but countries are also looking at ticket taxes and giving low-emission aircraft more benefits.

The new year may also prove definitive for the transatlantic commercial aircraft rivalry between US planemaker Boeing and European counterpart Airbus.

After two deadly crashes, Boeing’s 737 MAX planes were grounded, pending a complete safety overhaul and are still yet to return to the skies. Airbus recently secured a number of high-profile lucrative offers while Boeing replaced its CEO earlier in December.

Relations between the US plane regulator, the FAA, and its European equivalent, EASA, may depend on how the FAA handles the MAX’s approval process. EASA insisted in the wake of the crashes that it would not just rubberstamp the plane’s certification but conduct its own tests.

Airbus is the paradigm of European industrial policy-come-good and the EU is looking carefully at how to replicate its success in other sectors, although a recent defeat at the WTO in a decade-long subsidy case means it is treading carefully.

An ongoing switch in the transport sector from conventional fuels like oil and gas to electricity means that there is big money in battery technology, making it a prime candidate for the Airbus-style treatment.

To illustrate that, the Commission in December gave its approval to a cross-border battery project helmed by France but involving numerous countries. The green light means those countries will be able to provide state aid to battery-focused schemes.

Commission heads have hailed the project as the way forward in industrial policy and an even bigger and more ambitious scheme is due to also take off next year.

Under its Important Projects of Common European Interest (IPCEI) programme, the EU executive hopes to give its support to projects that further its own goals and given the positive reception so far, 2020 is likely to see even more action there.

Next year will be a definitive 12 months for member state strategies when it comes to wider climate policy, as overall targets in renewable power, energy efficiency and CO2 reduction both lapse and start anew.

Countries will either hit or miss their 2020 targets but will also have to start implementing policies with new 2030 benchmarks in mind.

In-depth energy and climate plans, known as NECPs, are due by the end of December, after an entire year of tinkering and tweaking by national officials under EU guidance.

Industry groups have claimed that those draft plans did not pay enough attention to the transport sector but it remains to be seen whether anything will change in the finalised versions.