A change of tone was perceptible last Friday (7 December) when the European Automobile Association (ACEA) briefed journalists about the industry’s position on CO2 emissions standards for trucks.

“We are concerned that there is a general misperception that the industry is in opposition to the introduction of CO2 emission standards for our sector,” said Joachim Drees, the CEO of MAN Truck & Bus who chairs ACEA’s commercial vehicle board of directors.

“Let’s be absolutely clear – we are not fighting against the regulation, we are committed to reducing CO2 emissions. What we are fighting for is a balanced regulation,” Drees said.

Less than a month ago, members of the European Parliament voted to beef up a draft EU regulation aimed at cutting CO2 emissions from heavy-duty vehicles, going beyond what the European Commission had originally proposed.

Truck makers reacted furiously. In a statement, ACEA said it was “alarmed by the excessively aggressive CO2 reduction target” voted by Parliament and blamed MEPs for “blatantly ignoring the fact that the potential for electrifying the truck fleet is far lower than for cars”.

On Friday, the tone was more cordial. Truck makers seem ready to accept that electrification will probably happen faster than originally foreseen. ACEA’s comments are now focused more on developing the necessary recharging infrastructure – in cities and motorways.

“To meet the CO2 targets, an extremely high proportion of medium-sized urban delivery vehicles will have to be zero emission in a few years,” Drees pointed out, confirming a trend that has already become visible in the industry.

However, ACEA stressed that electrification will take more time for long-distance road transport.

“While using electric power for a delivery truck operating in urban environments can make sense, a scenario where electric power is the right choice for a 14-tonne truck operating between Spain and Poland is much less likely in the mid-term or even in the long-term,” Drees said, pointing to the specific needs of trucks when it comes to recharging infrastructure.

Indeed, “it would take days to recharge” a heavy-duty electric truck on the same infrastructure used by cars, he pointed out, saying “recharging infrastructure suitable for trucks is simply not available today”.

More room is also required alongside motorways, Drees added, saying “overfilled parking lots” are already a problem alongside motorways at night. “Now you have to consider this also in connection with recharging infrastructure,” he said.

And in urban logistics, fleet owners will have to make charging points available on their premises, Drees pointed out, saying this will add to cost pressure on operators.

All of these challenges will have to be addressed without losing sight of the industry’s needs, Drees underlined. “Our customers need to make money with trucks. They are not lifestyle products,” he warned.

That said, the industry has not been standing idle. Manufacturers have done “a lot of work with infrastructure providers” to better understand the needs of the road transport sector, Drees said. For city deliveries, “we have invested in people who are consulting our customers” about their recharging infrastructure requirements. 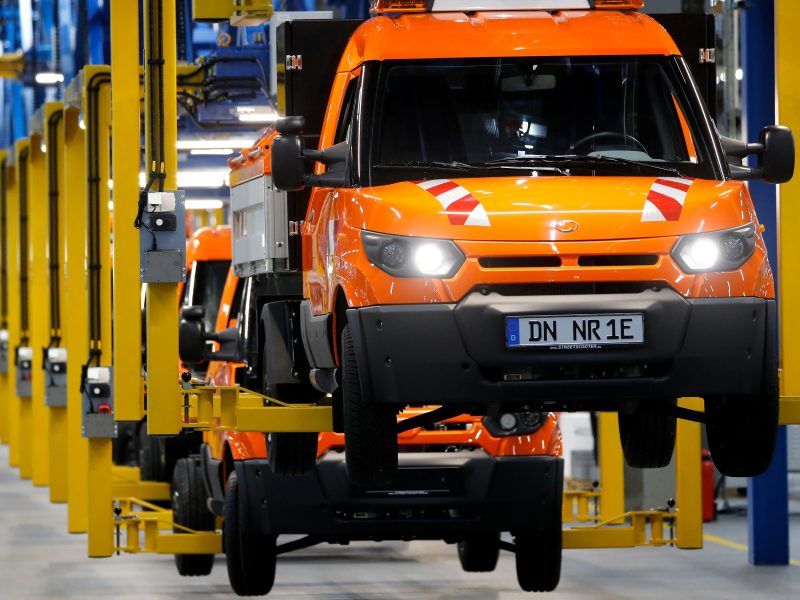 While electrification remains a challenge for long-distance haulage, the direction of travel is becoming clearer – at least for policymakers. In November, the European Commission published a long-term climate strategy for 2050, which put electrification at the centre of the sector’s decarbonisation efforts.

Much of the EU’s hopes rest on rapid advances on battery and fuel cell developments, which “need to be complemented by strong action to accelerate the roll-out of appropriate recharging and refuelling infrastructure,” the Commission said in its 2050 climate strategy.

For long-haul transport, electrification can also take place via catenary lines and pantograph systems, such as in rail, tram, and metro systems “or possibly through road electrification,” the Commission noted.

But some argue that the Commission may have been overly cautious in its assumptions.

“We are probably more optimistic than the Commission that battery-electric vehicles in trucks may extend their dominance to long distance haulage,” said Lord Adair Turner, a former boss of the Confederation of British Industry (CBI) who was chairman of the 2008 UK Committee on Climate Change.

According to Turner, the electrical drivetrain has a “huge advantage” over the internal combustion engine (ICE) when it comes to efficient use of energy. And that advantage applies to heavy-duty long-distance transport as well, he said.

“With an internal combustion engine, 70-80% of the energy is disappearing in heat, and only 20-30% of the energy is kinetic energy going in the wheels. However efficient they make the engine, it will always be the case that energy is lost,” he told EURACTIV in a phone interview.

“Whereas with an electric engine, around 90-95% ends up as kinetic energy. And that inherent, fundamental advantage of electric engines in terms of thermodynamics, we think, means they will dominate the trucking arena,” he said.

Lord Adair Turner is currently chairman of the Energy Transitions Commission (ETC), a diverse group of leaders from the public, private and social sectors, which includes several CEOs or senior executives from multinationals like PB, Shell, Engie, and Tata. In a recent report, called Mission Possible, the ETC said electrification and hydrogen were the main avenues for heavy-duty transport in the long run.

“We think the engines will go electric,” Turner told EURACTIV. “Urban buses can go electric. China is now committed to having all its one million urban buses electric by 2025. Cities like Shenzhen are already all-electric. Wonder around Shanghai and Beijing, you’ll see electric buses all over the place. I think buses are going to go electric faster than people think.

The ETC can certainly see “a major role” for hydrogen in long-distance trucks and on railway networks which have not yet been electrified, Turner said. There, “it may make sense to go for hydrogen rather than take the capital cost of electrifying the less-utilised rail lines. Long-distance freight railways, we can also easily see a shift to hydrogen,” he said.

“But as for the balance between short- and long-distance between battery electric and hydrogen fuel cell electric, let the market decide. We can certainly see a role for both.”

On the other hand, Turner was dismissive about the potential of gas for trucking. “Gas is only a partial solution, it’s a stop-gap. If you look at our Mission Possible report, we can see a role for the gas route in trucks, but it’s not a fundamental role.”