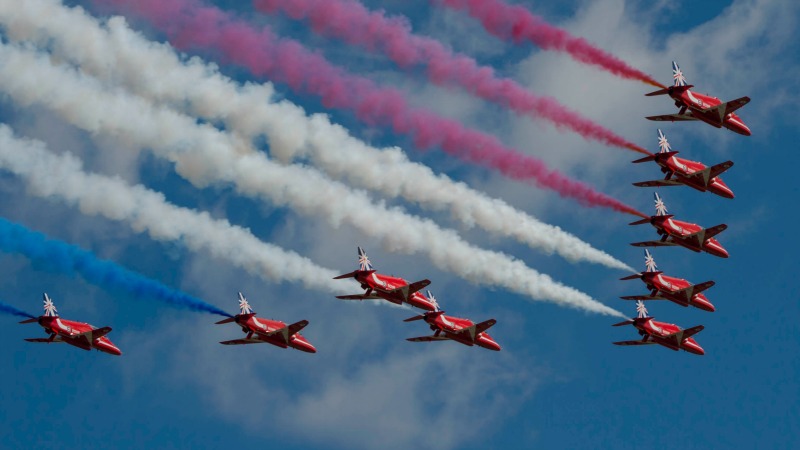 This article is part of our special report Farnborough International Airshow 2016.

British aviation businesses, large and small, are split over the consequences of Brexit run. But they do agree that divorce negotiations between the UK and the EU need to be quick in order to avoid further uncertainty.

Despite turbulence triggered by the UK’s vote to break with the EU, aviation representatives at the Farnborough Airshow were unanimously reassuring about the industry’s perspectives.

Damage to the aviation sector, if it ever materialises, will not come before two or three years, they claimed.

“This is ‘business as usual’,” a representative of BAE Systems told euractiv.com in an informal conversation.

“As a public institution, our line is the government’s position: this is ‘business as usual’,” echoed an official from the UK space agency.

The ringing endorsement for Britain’s future in the aviation industry may come as a surprise, given the importance of the sector for the British economy. At 3.4%, the UK has the highest percentage of GDP derived from aviation-based businesses in Europe.

In fact, even the official line is not that reassuring.

In his opening speech at the Farnborough Airshow, Prime Minister David Cameron admitted that Brexit represents “the biggest challenge for the British political system” in the last four decades.

In spite of those risks, Cameron said he was confident that “the UK will continue to lead the world in both civil and defence aerospace”. But given his previous declarations about the economic threat posed by Brexit, this is a promise that ringed hollow.

The EU’s Commissioner for Transport, Violeta Bulc, who was invited to attend the air show, declined. Members of her team explained this had nothing to do with the outcome the Brexit referendum, saying she announced her decision before 23 June.

EU institutions were represented by a handful of officials, including Clara de la Torre, Director for research and innovation at the European Commission’s DG Research, and Romanian Partidul Naţional MEP Marian-Jean Marinescu (EPP).

Should I stay or should I go?

In the end, the strongest commitment to Britain’s aviation industry probably came from Boeing.

The American plane manufacturer pledged to increase investment and create new jobs “in recognition of the capabilities and opportunities presented by the UK aerospace and defence industry”, the company said in a statement.

Boeing will make the UK its European base for training, maintenance, repair and overhaul for its defence arm, and increase staffing across commercial aviation services by 50%.

“This long-term commitment shows the UK is open for business, and attractive for investment,” Cameron said.

Over the last five years, the US company already doubled its UK workforce to 2,000 people, and more than doubled its annual spending on British suppliers to $2.65 billion (€2.39bn).

But not all big players in the aviation industry were so positive.

Airbus’ Chief Operating Officer, Tom Williams, warned that the company could make “big decisions” if the bureaucracy implied by dealings with British suppliers became a problem after Brexit.

“We haven’t pulled back on investment in the months running up to Brexit. We have no major decisions on the horizon, which gives us two-three years for the whole thing to settle down. But then there will be big decisions,” he warned.

“With Brexit, nothing has changed in the short term, but of course future investment does come under review,” he said.

Most companies, however, preferred staying away from drawing conclusions for the long-term.

“At Rolls Royce we are thinking a way through the implications at the moment,” said Ric Parker, director of Research and Technology at the company until April this year.

Parker, who is now a senior advisor at the company, recalled that Rolls Royce is not only a British aviation firm but also a European group.

This is why Rolls Royce expects policymakers to show some “sensibility” and avoid erecting barriers to trade between the UK and the EU, Parker said.

Similarly, BAE Systems, one of the largest defence contractors in Britain, said nothing would change in the short term. “While we await the outcome of the UK’s negotiations with the EU, we do not anticipate any immediate or material direct impact on our business,” the company announced in a prepared statement.

Senior European political figures appealed Sunday (3 July) for the EU to set aside lofty debate as it struggles with Brexit-style populism, and instead to focus on measures which clearly benefit citizens.

While BAE Systems and Rolls Royce might be able to navigate around Brexit pitfalls, smaller players of the aviation sector were mired in uncertainty.

“My boss is really concerned but I don’t think that it will be that bad,” an employee of a medium-sized company said on condition of anonymity.

Brexit “will not be much of a change, because most of our business is in the UK,” said Marc Graham, business development manager at PGT Ceewrite.

But other small firms said the break-up was already having “terrible” effects on business. Maurice Morsia from Peli, a technical packaging company, said the fall of the pound has cut the firm’s profit margins by 20%.

“We have to put our prices up,” he said.

“For many people, Brexit was a protest vote against the government, but what they have done is to shoot themselves in the foot,” said Morsia, who also holds an Italian passport.

The geographical differences seen in the referendum vote were also visible among the businesses present at Farnborough.

A boss from a medium-sized company with 28 employees in the Midlands, who did not want to be named, said that leaving the EU “could be good because some decisions, such as trade agreements with the US and Australia, could be adopted more quickly”.

Even though Europe represents 20% of the company’s market, he believes that sales will not suffer after Brexit, saying the divorce from Europe will allow Britain to “escape from the “Brussels’ dictate.”

The feeling was different at Springco, a Northern Irish firm with 45 employees.

“We were shocked by the results,” said a senior manager there who was attending the Farnborough Airshow. “We expect uncertainty for the next two or three years”, he said, adding that “investment in the industry is going to be curtailed slightly”.

The bright future depicted by Cameron is “slight wishful thinking,” he claimed.

Bad for the UK, good for Europe?

One area clearly at risk from Britain’s break-up with Europe is public-funded research programmes.

Brexit will bring an end to the country’s successful involvement in Clean Sky, the EU’s public-private aviation research programme.

British SMEs, research centres and universities were leading participants in the first edition of Clean Sky. They are also playing a big role in Clean Sky II, the €4 billion programme aimed at keeping Europe at the forefront of the technological race in the aviation sector.

“The UK is a major participant,” confirmed Ric Parker, who is also the Chairman of the Clean Sky Governing Board.

After Brexit, the UK could continue its association in the initiative like China and Israel, which bring their own money to the programme.

Meanwhile, the UK’s exit could finally pave the way to reach an agreement on Single Sky, the EU’s initiative to harmonise the European airspace and create more efficient routes.

Improvement in air management is seen as key for cutting emissions and save fuel consumption by airplanes.

But the official strong endorsement about the benefits of an integrated air traffic management system was not sufficient to push a decision at EU level.

Spain wants to exclude Gibraltar airport from EU aviation rules until the dispute over the isthmus sovereignty is solved. But as EU officials noted informally, Britain’s departure from the EU could finally force the member states to take sides with Madrid.

The aviation sector contributes £52 billion (3.4%) to UK GDP. This comprises:

Meanwhile, the aviation sector supports 961,000 jobs in the UK. This total comprises: