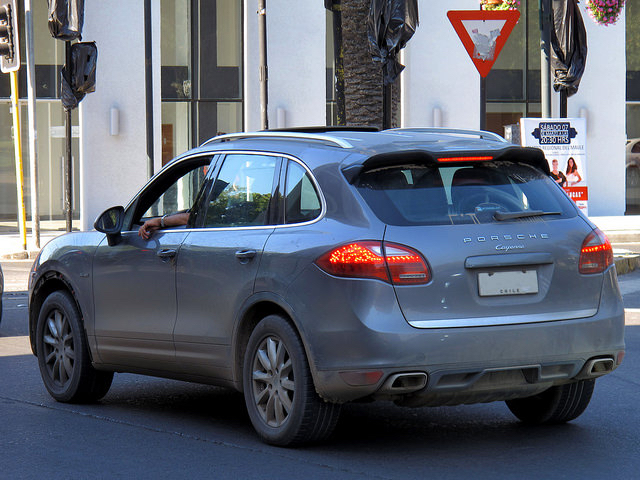 The Volkswagen emissions-cheating scandal widened Monday (2 November) as US regulators said the German automaker also included illegal “defeat devices” on its larger 3.0 liter diesel engines over the past three years.

But the Environmental Protection Agency said it had discovered in its investigation that various six-cylinder 3.0 liter diesel VW Touareg, Porsche Cayenne and Audis from the 2014-2016 model years and distributed in the United States had also been rigged with the software.

“We have clear evidence of these additional violations,” said Cynthia Giles, an official with the EPA’s Enforcement and Compliance Assurance office.

“VW has once again failed its obligation to comply with the law that protects clean air for all Americans,” she said.

In a statement from its headquarters in Wolfsburg, Germany, the company denied its 3.0 liter engines had defeat devices.

“Volkswagen AG wishes to emphasize that no software has been installed in the 3-liter V6 diesel power units to alter emissions characteristics in a forbidden manner,” it said.

“Volkswagen will cooperate fully with the EPA (to) clarify this matter in its entirety.”

Separately Porsche, a VW unit and directly caught up in the controversy for the first time, said: “We are surprised to learn this information. Until this notice, all of our information was that the Porsche Cayenne Diesel is fully compliant.”

The expansion of the scandal spelled further damage to Volkswagen, the world’s second-largest automaker and long an emblem of Germany’s industrial might.

Already one chief executive of the company, Martin Winterkorn, has lost his job, and shares of the giant have lost nearly one-third of their value since the scandal erupted.

The new US notice of violation, for the larger-engined cars, could weigh on Winterkorn’s replacement, Matthias Mueller, who was elevated from running VW’s Porsche subsidiary. At the time of his promotion, Porsche vehicles were not known to have the defeat devices.

Moreover, the first notice of violation on 18 September, which launched the scandal, made clear that from the EPA alone, the company was facing a potential $18 billion in fines, based on the maximum allowed per vehicle and the half-million US-sold cars covered.

There are also a number of owner lawsuits against the company, and it could be hit with fines in other countries and regions as well.

The new notice covers about 10,000 mostly luxury cars already sold in the United States, and an unknown number still unsold.

But, as with the initial notice, it was possible that the same cars sold elsewhere would be shown to have software defeat devices as well.

The software makes the engines run according to US standards when emissions testing is ongoing.

“At exactly one second” after the emission test ends, Giles said, the software switches into standard-drive mode in which poisonous nitrogen oxide emissions rise to up to nine times the EPA standard.

“The vehicles operate at this higher emitting ‘normal’ mode when the vehicle detects that it is not undergoing an emissions test,” she said.

“This design feature is an illegal defeat device,” she said.

That put Volkswagen in violation of two provisions of the US Clean Air Act, in making and selling cars that have defeat devices and do not meet US emissions standards.

The new information came out of joint investigations into actual emissions performance by a range of cars, including those from other makers besides Volkswagen, by the EPA, the California Air Resources Board and Environment Canada.

Giles said they had not found the problem on any other makers’ vehicles so far.

After the initial accusations in September, Volkswagen publicly admitted that its smaller diesels had the defeat devices, and promised full cooperation in probes by not only US but also German and European authorities, and those in other countries.

The US House of Representatives Energy and Commerce Committee, which has opened a probe into the emissions scandal, said the new allegations meant “it’s time for Volkswagen to fully come clean.”

“The EPA expanding its investigation prompts questions regarding the prevalence of the emissions cheating and how it went undetected for so long,” committee leaders said in a statement.

The scandal is clearly taking a toll on Volkswagen. Last week the company booked its first quarterly loss in more than 15 years as it set aside €6.7 billion ($7.4 billion) to cover the initial costs of the scandal.

It was “far too early to calculate the cost of any legal measures,” Witter said. “The financial burden will be enormous, but manageable.”

The European Commission and national authorities agreed to more stringent emissions limits, based on real driving conditions instead of laboratory tests.

But countries with an important automotive sector were opposed to implementing the new rules too quickly and called for extra breathing space for the car makers to adapt.

A compromise agreement was finally reached in late October which allows vehicles to carry on emitting more than twice the agreed pollution limits, despite the outcry caused by the Volkswagen emissions scandal.

The Commission proposed that "real-world" testing should become operational starting in 2016, and take full effect after a two-year phase-in for new vehicles starting in 2017. Initially nitrogen oxide (NOx) readings, primarily associated with diesel cars, could exceed an 80 milligramme/kilometre limit by 60% before falling to 20%.

Instead, the compromise agreement sets a "conformity factor" of 2.1 from late 2017, meaning cars could emit more than twice the official limit. Two years later, it would fall to 1.5, meaning vehicles could emit nitrogen oxides, associated with respiratory disease and premature death, up to 50% above the legal ceiling.