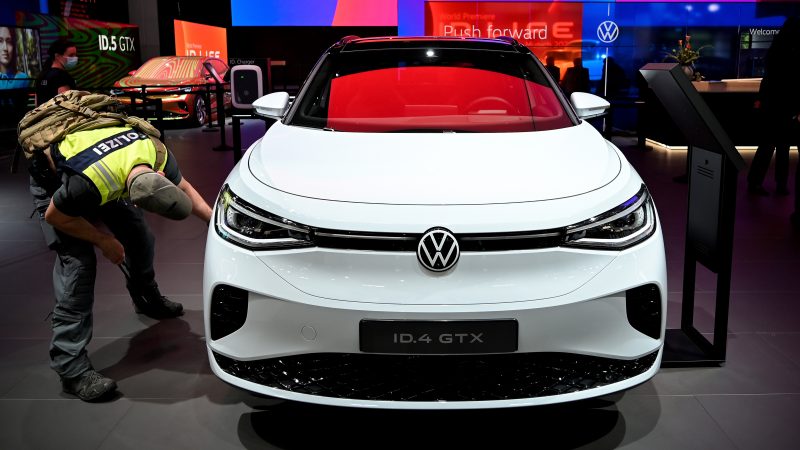 German car maker Volkswagen has met the EU's emission requirements for its fleet in 2021, afer having failed to do so in 2020. [EPA-EFE/SASCHA STEINBACH]

“Our group-wide electric offensive picked up significant speed last year with many attractive new models,” the head of sales for the multi-brand group Christian Dahlheim said.

Average CO2 emissions for passengers cars sold in the EU were “around two percent below the legal target”, according to preliminary figures from Volkswagen released 24 January.

In 2020, the group failed to come under the emissions limit, attributing the shortfall to the impact of the coronavirus pandemic on car sales.

Under EU legislation that came into force in 2020, manufacturers face hefty fines if the average emissions of their newly sold cars do not fall under a limit specific to each automaker.

Under the current emissions standard, Volkswagen was set a target of 120.8 grams of CO2 per kilometre and achieved a result of 118.5 g/km, according to the company.

In 2021, Volkswagen delivered 472,300 “electrified vehicles” — both hybrids and battery-electric cars — to customers in the EU, Norway and Iceland, a 64 percent increase on the previous year, according to the group.

The rise bucked the general trend in the auto market where manufacturers have seen production and sales held back by an enduring shortage of semiconductors, a key component in both conventional and electric vehicles.

Volkswagen managed to retain the top spot among carmakers in Europe in 2021, but a 4.8-percent drop in sales to 1.4 million vehicles caused its market share to dip to 25.1 percent, according to industry figures published last week.

The German group — whose 12 brands include Audi, Porsche and Skoda — is pumping 35 billion euros into the shift to electric vehicles and aims to become the world’s largest electric carmaker by 2025.