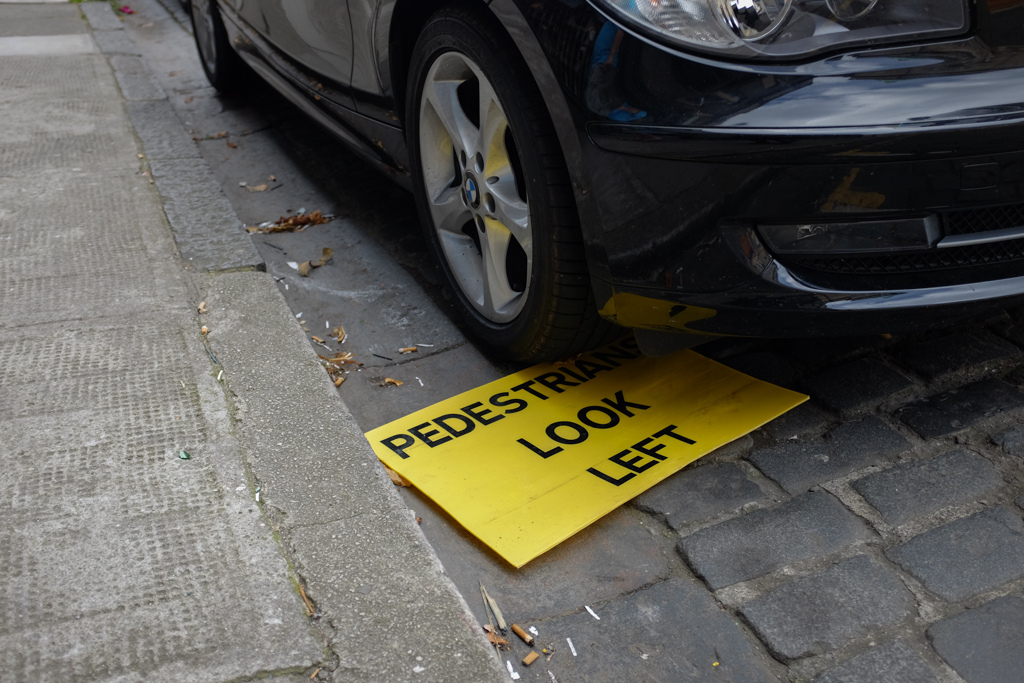 Pedestrians are seen as a neglected group by decision-makers. [Lucky Poet]

This article is part of our special report Transport: Moving ahead.

Road safety is one of the areas in which the EU can claim progress. Since the first targets were agreed on in 2000, the number of road deaths in the bloc has been cut by 53%.

“Our target of halving deaths by 2020 is still possible to reach,” an optimistic Commissioner for Transport, Violeta Bulc, told the European Transport Forum on Tuesday (29 September).

However, with fatalities rising in countries such as France over the last year, progress in halting road deaths appears to be slowing.

And at a global level, the statistics are alarming. Road deaths across the world amounted to the equivalent of 40 Airbus A380 passenger planes crashing every week. Just in Europe, the European Commission estimates that road accidents represent €130 billion a year in cost.

In order to continue reducing road casualties, the Commission is calling on member states to redouble their efforts to protect the most vulnerable road users, such as pedestrians, cyclists and motorcyclists.

Although we have made “considerable progress” in road safety, an evaluation of the EU strategy shows that “we must refocus our efforts and actions on protecting vulnerable users”, especially in urban areas, Bulc said.

José Viegas, Secretary-General at the International Transport Forum, an OECD organisation, agreed. The protection of vulnerable road users should be a “priority”, he stressed, saying groups like pedestrians are often “neglected” in government statistics, urban planning and policy development.

“Walking should be the safest way of mobility,” yet pedestrians represent nearly 40% of all road fatalities in some OECD member countries, Viegas pointed out.

In his view, a more integrated mobility and urban planning should be maintained when designing a common space for all city users.

The situation is not better for motorcyclists. Although they represent only 8% of the fleet, they suffer an average of 17% of fatalities. The risk of an accident is 30 times higher for them than for a car occupant. Motorcyclists have benefited less from safety improvements over the recent decades.

Viegas recommended a licensing system by degrees, in connection with riders’ experience and maturity, enforcing rules for the compulsory use of helmets and more “forgiving” roads to avoid fatal accidents when riders slide.

Not business as usual

Yves Crozet, Professor of Economics at the University of Lyon, pointed out that more than 40% of deaths affect pedestrians, cyclists and motorcyclists. Crozet called for a policy change to reach the ‘vision zero’ by focusing more on specific targets for particular groups. “We cannot continue with business as usual,” he said.

In a report published last March, the European Parliament stressed the need for a “new focus on pedestrians, cyclists, motorcyclists and vulnerable road users” to reach the ‘vision zero’ goal.

This is one of the elements of the broader package the Commission announced in 2010 to halve the number of road deaths. The EU executive also proposed to improve safety measures for trucks and cars; building safer infrastructure; developing intelligent vehicles and a more intense use of technology; strengthening licensing and training of drivers; a better enforcement of the rules in place; and a set of targets for injuries.

According to Commission figures, for every death on European roads, there are an estimated four permanently disabling injuries, such as damage to the brain or spinal cord, ten serious injuries, and 40 minor injuries.

For Commissioner Bulc, the EU needs to embrace a holistic approach. In this regard, Jan Gurander, Acting President and CEO of Volvo, emphasised that “the most important point” is the cooperation between the industry, politicians and researchers.

No matter what transport or what affected group is at stake, Gurander said, “we must act together” as “there is no single solution for safe and sustainable mobility”. And here, the Commission has “an important role to play”.