The world’s largest truckmaker does not think that e-fuels are a viable way to decarbonise heavy transport. Stef Cornelis explains here why he could not agree more.

After years of heel dragging and fighting truck fuel efficiency standards, it looks like Daimler might be stepping up its game.

Last month it announced that by 2039 all their new trucks and buses will be CO2 neutral. According to Daimler this can only be achieved with battery electric and hydrogen technologies.

This announcement seems to be a major step for an industry that not so long ago mainly saw biofuels and gas vehicles as clean alternatives.

But maybe the most interesting scoop was the head of Daimler Trucks and Buses, Martin Daum, telling Tagesspiegel that he doesn’t see synthetic fuels (known as e-fuels) as a viable alternative.

With this statement it now seems that, like Volkswagen, Daimler is now on a collision course with the German autolobby. The country’s automakers association, the VDA, sees e-fuels as a ‘promising way’ to decarbonise trucks.

What’s even more striking is the fact that not only the VDA but also the German government and the European Commission are still betting on e-fuels for trucks.

In its recent 2030 Climate Action Programme, the German government set the goal that by 2030, one-third of truck traffic needs to be electric or powered by electricity-based fuels. The European Commission, for their part, sees very big potential for e-fuels for trucks in its 2050 Long-Term Strategy, Clean Planet for all. 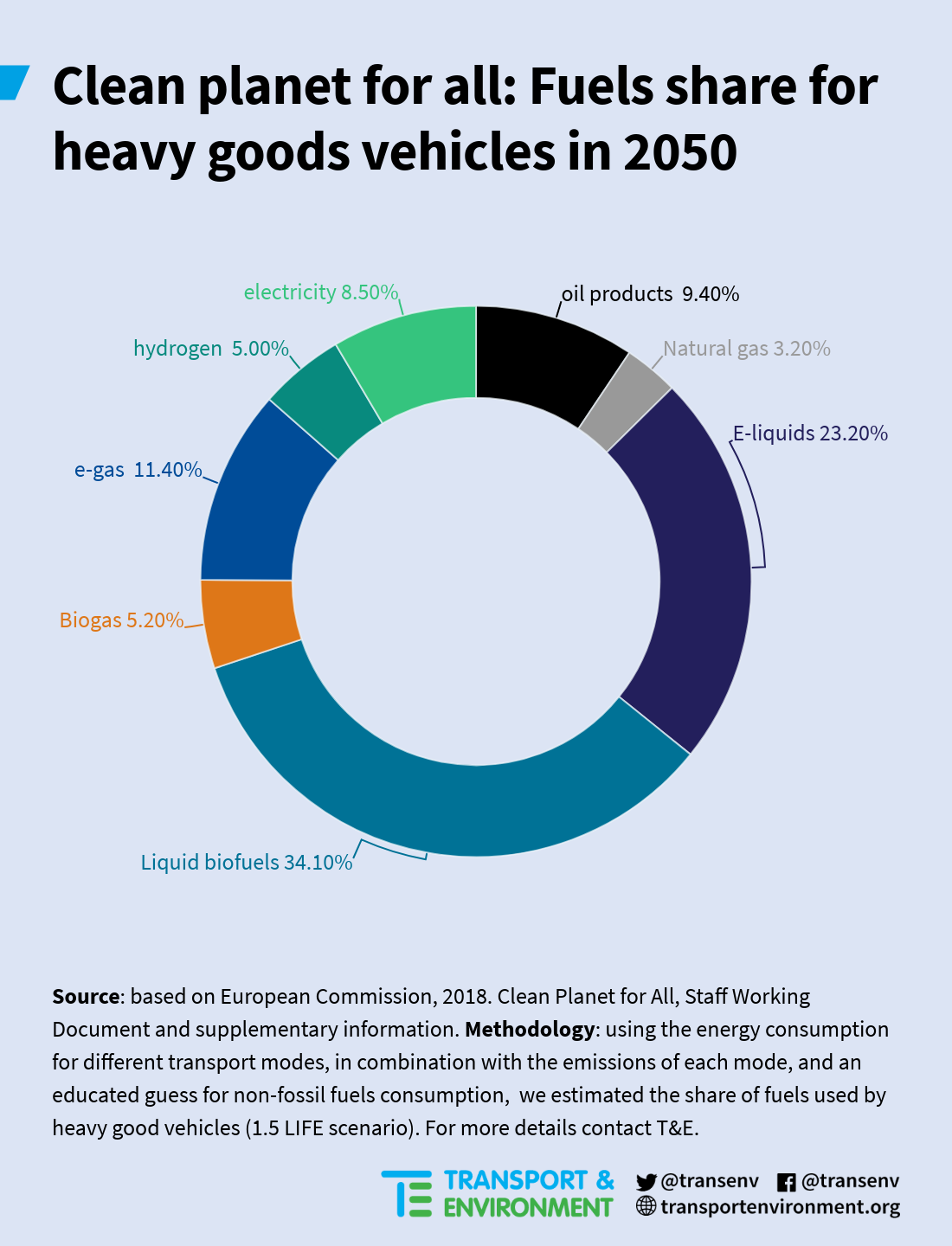 The whole debate on e-fuels – also known as synthetic fuels or power-to-liquid – was born some years ago in Berlin and now also appears more and more on the Brussels agenda. To make these fuels, huge amounts of electricity is used to both generate hydrogen and capture CO2 that is converted into synthetic diesel.

In the auto sector the VDA and their buddies love the idea merely because they can continue to build their beloved combustion engines. Meanwhile the oil industry uses e-fuels as a Trojan horse to wreak havoc and postpone the shift from fuels to renewable electricity.

Over the coming months the German government will come forward with a strategy to achieve their goal of shifting one-third of the truck traffic to electricity or electricity-based fuels. Meanwhile in Brussels, the brand new European Commission will propose the revision of the Alternative Fuels Infrastructure Directive (AFID), rolling out future infrastructure for cleaning up trucks.

Apart from Daimler’s announcements there are three key reasons why the German government and the Commission should think twice about betting on e-fuels for trucks, particularly given the fact that we will need them for sectors without any real alternative, like aviation.

First of all, it is perfectly possible in Germany to electrify one-third of the truck traffic by 2030 rather than fuel them with synthetic fuels. Not only Daimler but also MAN, Renault and Volvo have announced that series production of battery electric trucks will begin in the next three years.

The trucks we’re talking about go up to 26 tons and have a range between 200-350 km. Now, data show that in Germany more than 50% of the mileage is done by vehicles between 3.5-26 tons, which is exactly the category that will be electrified first.

This is not taking into account that heavier trucks could also partly be electrified by 2030, for example through overhead power lines or batteries as Daimler is also planning to bring a heavier battery electric tractor truck to the market.

Secondly, e-fuels are an inefficient alternative requiring massive amounts of electricity that has to come from renewables. Battery electric trucks or electric road systems are much more efficient as electricity is stored directly, skipping the inefficient transformation process.

So, powering all trucks in Germany in 2050 with e-fuels would require 407 TWh of electricity compared to 231 TWh for hydrogen and 89 TWh with direct electrification, while this all needs to come from renewables. 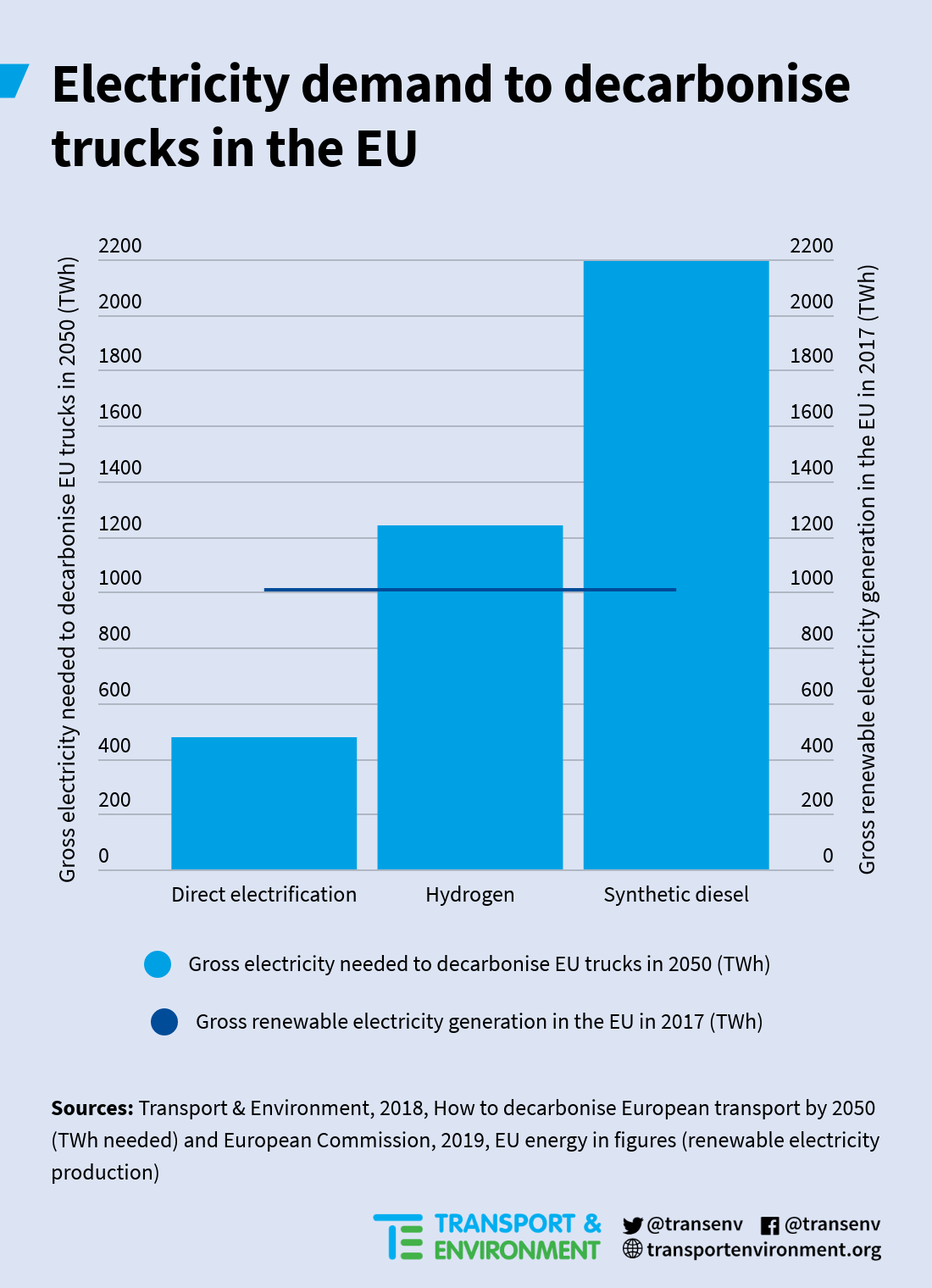 What’s important to note here is that total renewable electricity production in Germany in 2017 was 222 TWh. For the EU we’re looking at even bigger magnitudes of 476 TWh (direct electrification), compared 1,241 (hydrogen) to 2,191 TWh (synthetic fuels). For the sake of the overall goal of the German Climate Action Programme and the EU’s strategy, energy efficiency should not be overlooked.

Finally, because of their inefficiency, e-fuels are also incredibly expensive and would cost hauliers far more. Recent research shows that even in the best case scenario, the production costs of synthetic fuels in 2030 would be two to three times higher than regular diesel.

This while other research shows that already today, and certainly in 2025, it will be cheaper for truckers to run battery electric urban and regional trucks instead of regular diesel. This is mainly due to dropping battery prices, less maintenance and the higher efficiency of electric powertrains.

While e-fuels might be a good bet for a sector like aviation, which has no other way of dramatically slashing its emissions, they are an expensive and inefficient alternative for trucks.

Policymakers in Berlin and Brussels should put efficiency first when rolling out infrastructure and other support schemes for trucks. Investments should go to true zero-emission alternatives while at the same time we should bring battery production to Europe and have a battery recycling strategy.

The internal combustion engine is not eternal, and to my own pleasant surprise, Mr Daum and I seem to agree on this.

3 responses to “Berlin and Brussels should realise that e-fuels for trucks are a bad, expensive bet”