Carmakers are killing our right to clean air 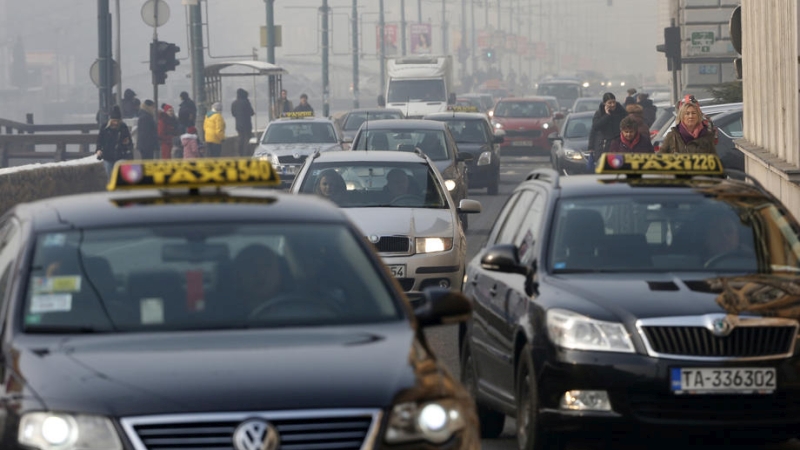 The car industry has fiercely criticised proposed Euro 7 emissions standards, claiming the regulation will cripple sales. But this is just another chapter in a long history of misleading the public, writes Anna Krajinska.

Anna Krajinska is the emission engineer at Transport & Environment, an NGO advocating for clean mobility.

The recent landmark ruling in the United Kingdom that air pollution caused by toxic emissions from cars, buses and trucks, was responsible for the death of 9 year-old Ella Adoo-Kissi-Debrah, should send a very clear message: failure to urgently address the causes of the toxic air that millions of us are forced to breath daily, will result in more unnecessary and avoidable deaths.

We have known for decades that dangerous emissions from diesel and petrol vehicles causes tens of thousands of premature deaths across Europe every year.

Yet, even after the dieselgate scandal exposed EU carmakers cheating on emissions tests, the industry continues to deny responsibility for the appalling air quality in our cities.

At this very moment, carmakers are aggressively lobbying against a new law that would make engines less polluting and improve air quality for all.

The human cost of serious health problems and diseases, including lung cancer, asthma and heart disease, also costs countries tens of billions of Euros every year.

The problem is particularly bad in traffic choked cities, where cars and trucks are the main source of nitrogen dioxide pollution. No one should have to accept toxic air in exchange for car manufacturers avoiding investing in cleaner cars.

Current tailpipe emission limits for cars, buses and trucks do little to fix the problem. Having last been reviewed more than a decade ago, the law is weak and full of loopholes often allowing vehicles to emit more than the legal limits on the road.

Without new limits, these polluting vehicles will continue to be sold for the foreseeable future. Many cars in the EU are not scrapped until they are more than 20 years old, and these cars will be polluting the air until the middle of the century.

The European Commission’s new vehicle emission law, Euro 7, would force carmakers to adopt technologies that slash pollution from engines. In response, Europe’s best known car makers are doing everything they can to stop the new law in its tracks.

The car industry has a long history of misleading the public, and claims that Euro 7 will kill the internal combustion engine in 2025 are just another example of an industry that has always cried wolf.

When fighting the adoption of current emissions standards, they claimed that compliance would be too expensive and would cripple sales. The industry’s apocalyptic visions didn’t come true then, nor will they this time.

That hasn’t stopped them adopting the same tactics, and using the same arguments to intimidate governments desperately concerned about economic revival and job creation in the recovery from the COVID-19 pandemic.

This month the car industry even went so far as to ‘celebrate’ the weakening of the new pollution limits, tone deaf to what more polluting cars in our cities mean for the health of the people who live and work there.

This is an industry used to getting its own way, and two weeks later they launched a scathing attack, unfairly claiming that even the much weaker standards will, ‘lead to the very premature end of the internal combustion engine with serious implications for industry’.

To kill off people’s right to clean air, the car industry lobby group, ACEA, has sunk to even greater depths. In expert groups, ACEA has made shocking and unsubstantiated claims that women’s safety will be jeopardised by new technology fitted to reduce emissions.

It has ridiculously claimed that underground car parks will be more dangerous for women, and that police could be prevented from responding to calls in a timely manner.

Such dirty tactics are typical of an industry that has repeatedly put profit ahead of doing what’s right or following the law. The ‘dieselgate’ scandal, and the recent finding of the European Commission that five German car makers colluded to not use low emission technologies on their cars, are testament to that.

Fundamentally, the car industry can’t be trusted to do what’s best for public health or the environment, especially when it comes to air pollution.

This is the first new emission standard since the ‘dieselgate scandal’. To really make a difference the Euro 7 needs to be ambitious, reducing emissions to the lowest levels needed for clean air, not on what is convenient for car makers.

Such a standard would make air safer to breathe across Europe, making towns and cities healthier places to live.

Carmakers mocked the public and the law by first weakening and then cheating previous emissions standards. Lobbying for their own self-interest against the public good should not be allowed to once again get in the way of clean air.

One response to “Carmakers are killing our right to clean air”