Have European manufacturers learned from developments in the car and bus markets? Or will American and Chinese companies lead the way to tomorrow’s zero emission freight transport? Lucien Mathieu poses some tough questions ahead of a big decision by EU negotiators.

On Monday (18 February), EU lawmakers may finally reach a deal on truck CO2 emission standards and on the first ever sales targets for zero and low-emission trucks.

Electric trucks will benefit hauliers and society as a whole, but an ambitious sales benchmark will be needed to make sure truckmakers actively sell affordable and reliable models.

E-trucks are the third chapter of vehicle electrification – European automakers lagged far behind in the first two: electric cars and e-buses.

The good news is that market monitoring shows production of new e-trucks is picking up momentum and the position of global leader remains up for grabs. If they act quickly and collectively, European truckmakers can still command pole position.

The modern story of vehicle electrification started in the early 2010s with the release of the Nissan Leaf, Tesla Model S and the BMW i3.

The Model S in particular had a major impact. Thanks to a long range and its fast charging network, it helped trigger a global race in vehicle electrification.

China reacted quickly and put in place regulations and generous incentive schemes to develop its domestic EV industry. It took Europe much longer to come to grips with this new reality.

It was only after Dieselgate, the success of Tesla and the aggressive policies of China that the EU and its auto industry finally started to move.

The second trigger for vehicle electrification came from China. In only three years, China went from having virtually no electric bus sales to a market share of 30% in 2016 (a whopping 130,000 units sold in one year) and became the leader in the e-bus race.

There’s now a third revolution in the making: truck electrification. There are signs of development in the three biggest markets but no clear leader yet.

A Bain consulting survey has shown that 40% of truck buyers will consider buying a hybrid or electric truck in their next purchase while only 30% believe regular diesel will be the main drivetrain in their fleet by 2025.

Major logistics companies recently called on EU regulators to set a zero emission truck sales target. Unfortunately for these truck buyers, today’s options are limited to retrofitted diesel trucks, a last-resort option in the face of the scarcity of newly-built e-trucks.

European truckmakers have acknowledged that truck electrification may come sooner than anticipated. But have European manufacturers learned from developments in the car and bus markets? Or will Californian and Chinese companies lead the way to tomorrow’s zero emission freight transport?

For Europe’s big seven truckmakers (DAF, Daimler, Iveco, MAN, Renault, Scania and Volvo) this is the third and final chance to get it right.

For urban and regional delivery applications the most promising technology is most likely full battery electric trucks.

Almost all truckmakers are testing electric delivery trucks that will be commercially available in a couple of years. (For example, Daimler eCanter and eActros, Volvo FL and FE Electric, MAN e-TGM, Renault D Z.E., and DAF CF Electric.)

Driven by a lower total-cost of ownership, tightening CO2 regulations, better driver comfort, and air quality action in cities, delivery trucks could be electrified at a fast pace.

For these delivery applications – travelling daily 100-200 km with lots of (sub)urban driving – e-trucks would not be dependant on public charging infrastructure as they could charge overnight or at the depot during loading and unloading.

For long haul, different forms of zero-emission electric drivetrain technologies are being developed in parallel.

Scania has embraced the electric catenary road system to charge battery e-trucks with trials in Germany, Sweden and Italy, Daimler appears to have a preference for plugs while DAF/VDL is doing trials with hydrogen fuel-cell trucks. One option could prevail in the next decade but it is also possible that these options will coexist. 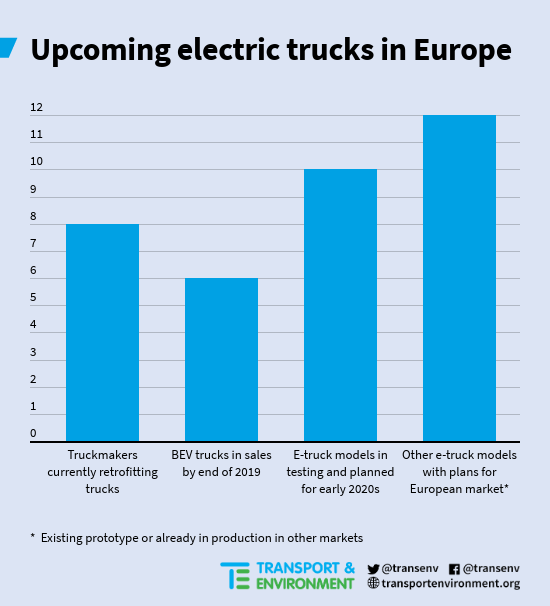 Regardless of the technological pathway(s) selected, this transition requires a capital-intensive infrastructure network. To enable the market to grow, national and EU regulators need to take action on truck recharging infrastructure.

One possible avenue would be to further develop ACEA’s call for charging infrastructure action plan for trucks. The upcoming review of the Alternative Fuels Infrastructure Directive will be an important opportunity to cement such a plan in legislation and to make EU and national funding available.

One response to “E-trucks: European automakers’ third and final chance to get electrification right”