An electric powered StreetScooter light truck pictured during opening of the new StreetScooter production in Dueren, Germany, 30 May 2018. StreetScooter is an electric vehicle manufacturer and subsidiary of Deutsche Post DHL Group. [EPA-EFE/FRIEDEMANN VOGEL]

Electric trucks will come – and fast. More and more studies show that they are not only feasible to build, but also profitable to operate. And zero-emission trucks will be needed to meet the Paris climate goals, write Stef Cornelis and Thomas Earl.

Last spring Daimler/Mercedes, the world’s number one truckmaker, was caught with its pants down by the Deutsche Post DHL Group. During a testing day organised by DP-DHL, which was presenting its self-developed electric van, the StreetScooter, one of its vehicles being trialled by potential customers went way outside the test drive area, with its GPS showing it was en route to Stuttgart.

What happened? Apparently Daimler/Mercedes – using a fake company name to claim they were a nursing service provider – hijacked the vehicle and took it to their testing lab. But, as Der Spiegel reported, the GPS system betrayed them. DP-DHL went to Stuttgart, knocked on Daimler’s factory door, and took their e-van back.

No apologies from Daimler – ‘a common procedure’ so they claimed. A story that not only illustrates the arrogance but also the clumsiness of the world’s biggest truckmaker in making a shift away from diesel trucks to electric vehicles.

But things can change fast, even in the trucking industry. In the last 12 months not only Daimler but nearly all major European truckmakers including Volvo-Renault, MAN and DAF have announced production and sales of electric trucks for the coming years.

When we speak to policymakers in Brussels and European capitals about electric trucks, the topic frequently elicits frowns and scepticism. Aren’t trucks too heavy, distances too long and batteries too big and expensive to electrify these mammoths? Well, the recent announcements by truckmakers show this is not true. Our own analysis shows that even the heaviest 40-tonne trucks are technically and economically viable.

This is mainly down to the following reasons: battery prices are falling faster than ever before; electric drivetrains are much more efficient than the outdated diesel technology; and 65% of the trips by trucks in Europe are less than 500 km, which means there is no need to have the same range as a long-haul diesel truck for most journeys.

On top of this, electric vehicles in the current Eurovignette proposal would get a major discount on tolled roads of at least 50% compared to the best-in-class diesel truck. All these factors make electric trucks – even with a high upfront cost – very competitive compared to their diesel counterparts. Increasing diesel taxes to a more sustainable level and getting rid of the far-too-generous rebates for truckers would make the picture for electric trucks even brighter. 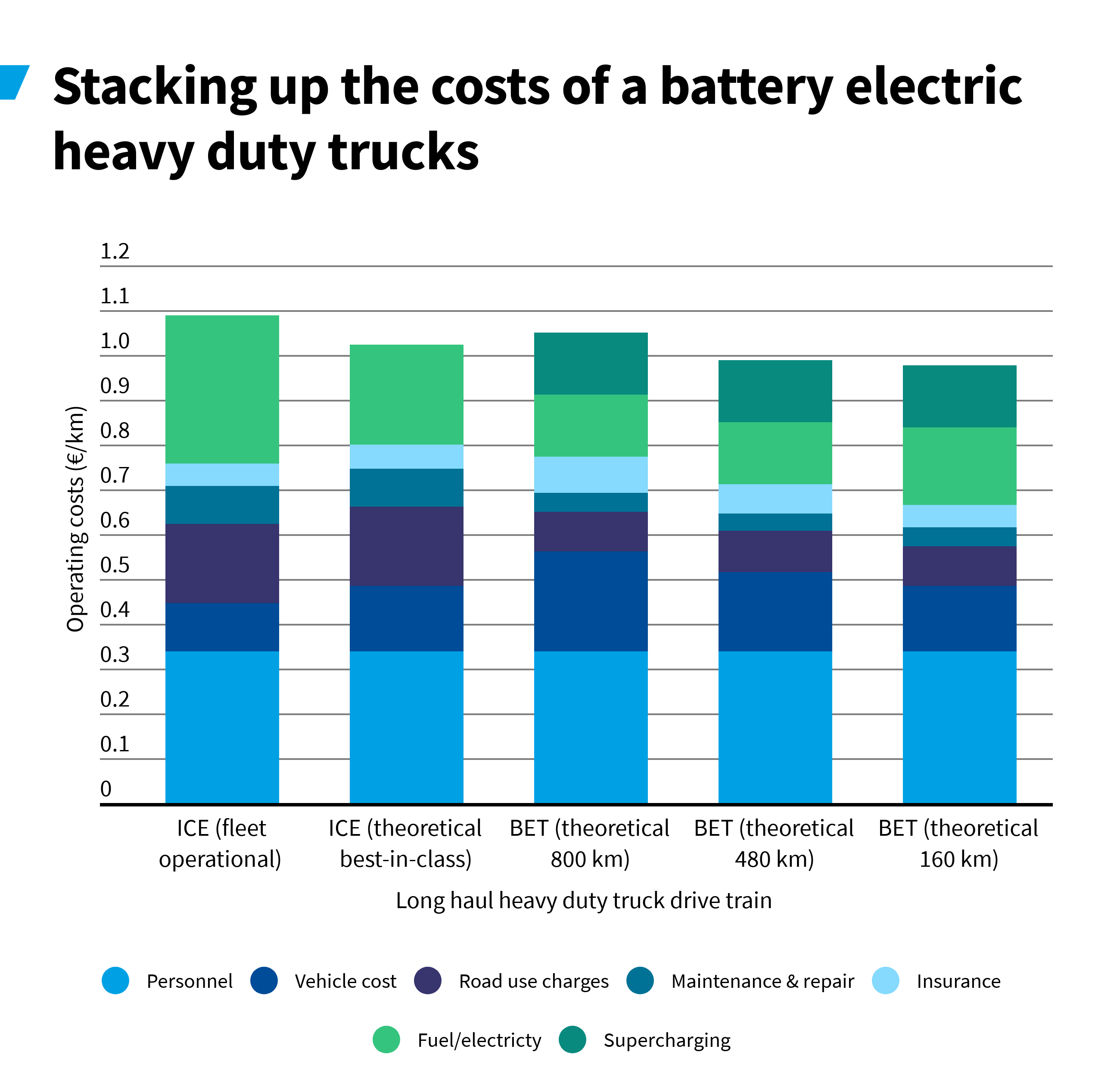 But we also urgently need electric trucks today to meet tomorrow’s climate goals. Trucks account for 22% of vehicle emissions while making up less than 5% of the vehicles on the road. The EU and all the member states have formally committed to the Paris climate agreement, which means limiting the temperature increase to 1.5°C. A new study commissioned by the Dutch Environment Ministry shows that in order to meet this target, one out of three new trucks will need to be electric or zero-emission by 2030 – otherwise we will never make it.

Achieving such a large market share is a huge challenge and can only be met if we take strong measures today. Electric trucks are compelling as they reduce emissions on a well-to-wheel basis (that means taking into account the ‘upstream’ emissions of producing electricity or refining fuel). Compared to a 2015 fleet average truck, a highly aerodynamic electric truck can reduce well-to-wheel emissions by up to 67%, and a less aerodynamic variant can reduce emissions by 58%, based on the 2014 EU grid. This will only improve as the electricity sector decarbonises under the EU emissions trading system. 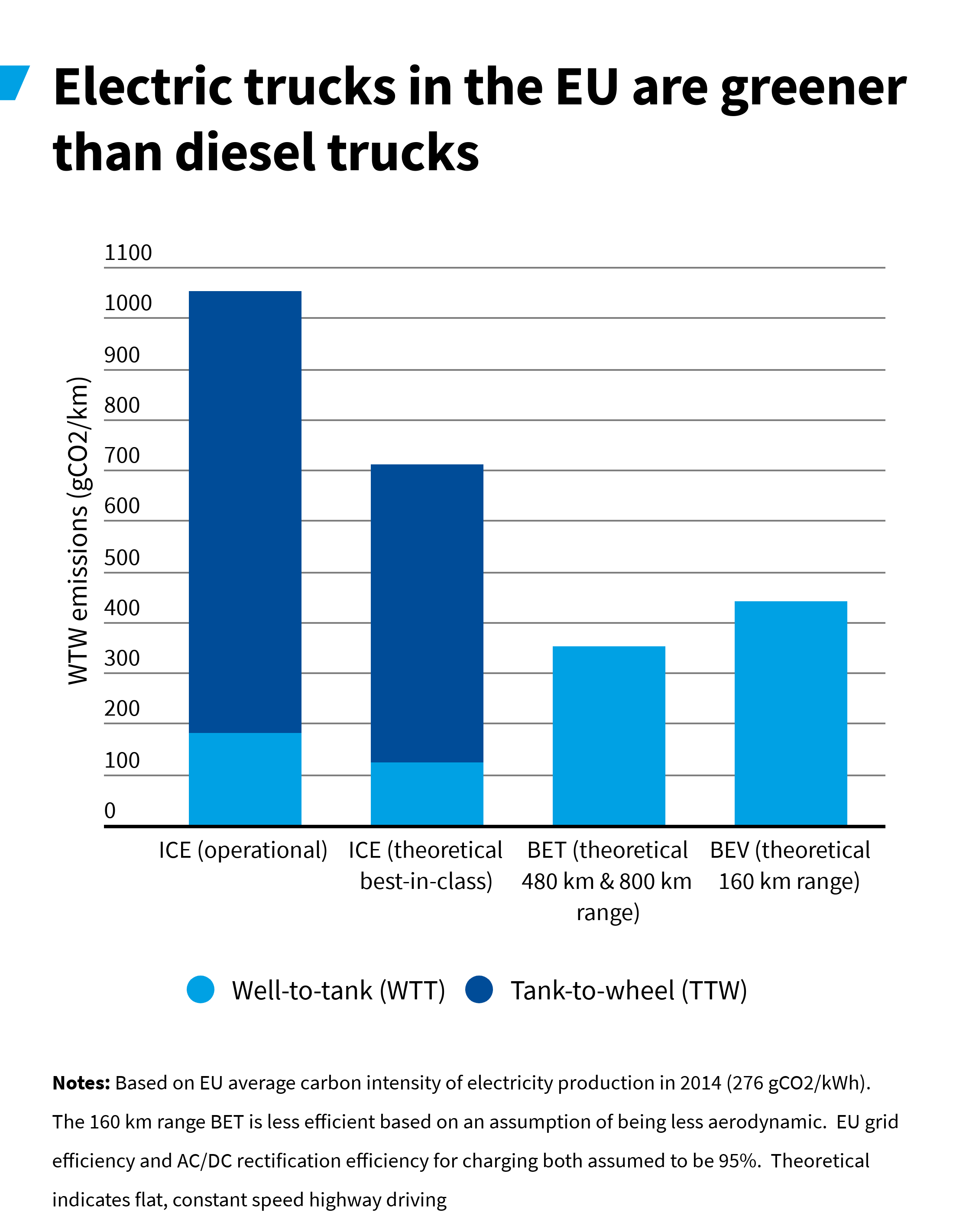 The only way we can achieve this, and guarantee that Europe sticks to its promises made in Paris, is by introducing ambitious and mandatory sales targets for electric trucks as part of the recent truck CO2 standards proposal. Such a target would oblige European truckmakers to really start selling electric trucks, backing up high-profile media announcements with substantial sales.

Cities and businesses are waiting for cleaner vehicles, and Europe now has the opportunity to strike. What is it waiting for?

One response to “Electric trucks are necessary and coming anyway”