Energy Union: The road ahead for more efficient transport 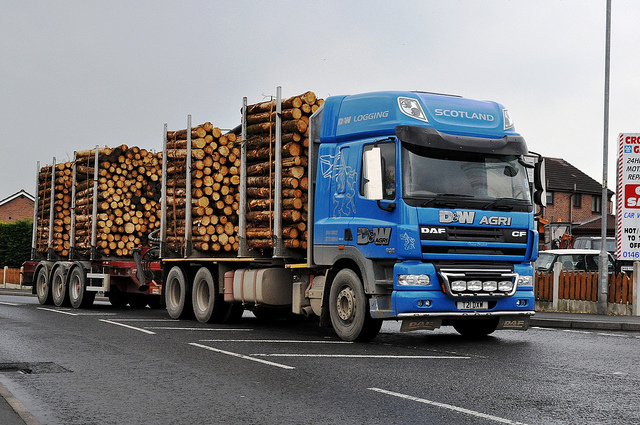 The EU is the only major market that does not have any CO2 standards in place for trucks– as a result, truck efficiency has been stagnating. [Ray Forster/Flickr]

Climate and energy crises are looming and only ambitious action can make the EU more environmentally friendly, energy secure and innovative at the same time, writes Nuša Urban?i?.

The much-hyped Energy Union communication has finally been published. Rumour has it that it represents the European Commission’s five-year work plan and the direction of travel to 2030. What is the road ahead for transport, and what can be further improved to make sure the EU can seriously tackle emissions from one of the most challenging sectors?

Transport represents 31% of the EU’s greenhouse gas (GHG) emissions – including international shipping and aviation – and is projected to grow further in the coming years. In line with our international climate obligations and according to the Commission’s White Paper on transport, Europe will, by 2050, have to cut emissions from transport by 60% compared to 1990 – a 3% reduction per year from today’s levels.

The transport sector is almost exclusively dependent on one single source of energy – oil. Last year Europe spent €300 billion a year on oil imports, two-thirds of which is for transport. A third of European oil comes from Russia and another third from the Middle East. The best way to deal with this is vehicle efficiency standards, electrification of transport, and the pricing of transport and its carbon – all featuring in the Energy Union communication but with a lack of specifics.

The Commission embedded efficiency as a first principle in its communication and has committed to “encourage member states to give it primary consideration in their policies”. Transport is specifically mentioned and here the Commission can take the lead by proposing ambitious efficiency standards for cars, vans and trucks. Establishing vehicle CO2 regulations targets for vehicles for 2025 will benefit drivers in lower fuel bills and the environment through lower emissions, while at the same time creating growth and jobs in Europe. It is a no regrets policy the Commission must initiate in 2016 by setting targets equivalent to 70g/km for 2025 for cars (as measured by the NEDC cycle) and 50g/km for 2030.

On trucks, the EU is the only major market that does not have any CO2 standards in place – as a result, truck efficiency has been stagnating. All of these measures will also help member states to meet their national targets – especially the ones that will be proposed in the effort sharing legislation in 2016.

The next logical step is the electrification of transport, which is more efficient in its own right, but it also has the most potential to drive low-carbon renewable fuels and make governments and local authorities rethink inter-modality. The Commission should roll out a holistic strategy on electrification that would integrate small vehicles, rail, as well as freight transport. After all, most oil is used and most CO2 emitted on longer distances, and focusing on urban transport always raises concerns of subsidiarity.

On alternative fuels, we have learned lessons from the past that truly sustainable biofuels will only exist in limited quantities. The Commission should promote research and innovation to unlock their potential, but make sure that indirect impacts of all biofuels are addressed and that no environmentally harmful biofuels are promoted after 2020.

Finally, in the Energy Union communication the Commission has finally clarified that aviation and shipping are included in the 2030 40% reduction commitment. So they should be. Bunker emissions are projected to grow by up to 250% globally in 2050. The EU needs to hold the IMO and ICAO accountable to come up with emissions reduction measures by the end of 2016. On standards, EU members of ICAO need to act firmly lest the ICAO CO2 standard for new aircraft now under development turns out to be toothless. Shipping’s EEDI design efficiency standard, also now under review, needs a wide-ranging reappraisal. Meantime the Energy Union requires additional measures from these sectors. We look to see what the Commission will propose.

The Energy Union is a step in the right direction on transport, but the Commission should be ambitious in coming forward with concrete legislative proposals and not give in to special interests, as we have seen so many times in the past. Climate and energy crises are looming, and only ambitious action can make the EU more environmentally friendly, energy secure and innovative at the same time.