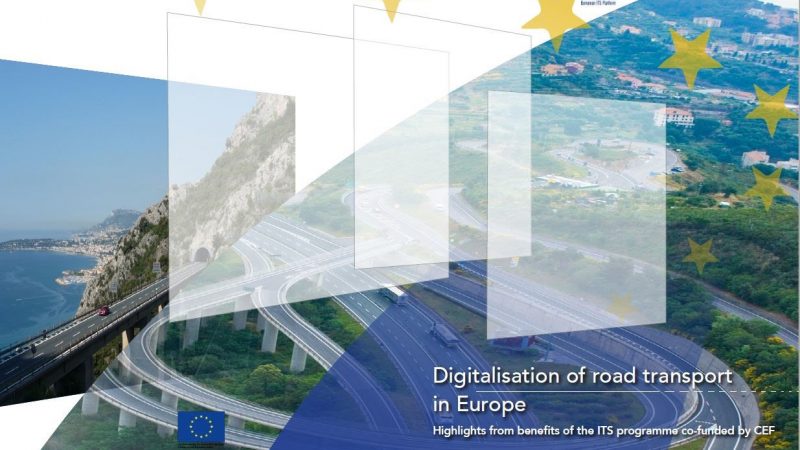 Digitalisation of road transport in Europe.

This article is part of our special report Intelligent transport systems.

The European Union activated an ambitious plan on two of the most fundamental subjects for the life of its citizens, namely the Green Deal and the Digital Strategy. Global climate change can put at risk the quality of life of the people, whilst the rapid introduction of digital services should, and can, bring big benefits. However, it implies also big risks for the security of all the business sectors, and for the privacy of the citizens.

The European plan aims at maximizing the potential benefits and preventing unwanted consequences. The transport sector is actually a very important part of the two initiatives since it is a big generator of emissions in the atmosphere and on the other hand, it is a sector with a very high potential for the application of digital services. In this framework implementations in ITS corridors are able to concretely contribute to the objectives of European common interest. Also, the European ITS Platform is connecting the real world ITS implementations of its members, the European Road operators and their partners, with the European strategy. This is realized by framing the results, allowing for verifiable assessment of the result and providing the instrument connecting the EU plans with the operational layers.

The experience and ex-post figures show that the digitalisation provided through ITS in road traffic and transport is reducing travel times, bottlenecks, incidents, accidents, queues, and break-downs. Therefore digitalisation is reducing the emission to the minimum level actually needed for undisturbed traffic and transport in a safe way. Digitalisation is being introduced and needs the utmost care regarding the correct treatment of the citizens’ personal data, to prevent identity violations and thefts, but also with due attention to the security of the systems in order to prevent any possibility of hacking through a security breach. In these efforts, the perhaps most valuable asset of the CEF ITS Corridors and the European ITS Platform is the cooperation among its business and institutional partners, encompassing the diversity of the European actors and demonstrating the huge benefits of such a cooperation.

DG MOVE, INEA and European road authorities have been working together for several years to implement ITS systems and services in response to the ITS Directive 2010/40/EU, in particular the wider deployment of Safety-Related Traffic Information (SRTI) and Real-Time Traffic Information (RTTI), better traffic management and services relating to the freight industry. This has been achieved through the formation of five ‘ITS Corridors’ which comprise largely linear stretches of the trans-European Core and Comprehensive networks. The European ITS Platform (https://www.its-platform.eu/) prepared this short piece to highlight some of the results achieved by ITS corridors Arc Atlantique, MedTIS, Next-ITS and URSA MAJOR.

On top of the hard infrastructures of the Core Network Corridors, CNC’s, and the comprehensive TEN-T network, measures and services for their optimal use are essential. Those services will provide better performance of those hard infrastructures, higher throughput, fewer queues, better safety, and lower environmental impact and carbon footprint. Further, when harmonized, they’ll cater for cross-border seamlessness of the corridor and enhance its multimodal use. Those services, both public and private, are always based on data, communication and information. For roads and the interfaces to other modes, we call them Intelligent

Transport Services, ITS. One more important feature of ITS is that it is easier and quicker to implement than expanding the basic hard infrastructures, raising their performance at a considerably lower cost.

With new policies for the coming decade, viz. the Green Deal and Digital Europe, the digitalisation of the Core Network Corridors, and also transport as a whole, including the urban environment, will be prioritised. The so-called ITS corridors already cover most of the CNC’s and with the experience, built-in EU EIP will be a solid base for helping to realise the digitalisation of CNCs, wider networks and hubs. Collaboration with and coverage of the CNC’s will be intensified to create the digital backbone and services which will make them perform in an optimal and integral way. With higher interests and investments in the coming years, the efforts on evaluation need to be sustained and extended to provide evidence that investments in digitalisation are sound. More projects need to be evaluated to build that body of evidence, and further methodology on extranslating project performance into a corridor or network performance will be required. That way the merging of digitalisation and infrastructure, “making better use of existing infrastructures”, and the realisation of the Single European Transport Area by facilitating multimodal use can best be warranted.

Based on available results from the ITS corridors, pan-corridor estimated global minimum 5-year safety benefits and return on investment (ROI) have been calculated. In terms of minimum safety-related socio-economic savings as a result of combined programme investments over a 5-year period, it can be concluded that:

In conclusion, as a result of these safety benefits alone, it is apparent that the combined ITS Corridor investments also result in a high financial benefit. Based on the combined investment of 232 Million € across the 4 ITS corridors, the following minimum savings based on safety impacts

alone can be established:

(based on an average lifetime of 10 years for the related infrastructure components).