Green groups are concerned about a push by the gas, oil, biofuel and truck industry to include a so-called ‘Carbon Correction Factor’ (CCF) for trucks and buses running on advanced biofuels. [firstbusphotos / Flickr]

The European Commission made its proposal in to regulate greenhouse gas emissions from heavy duty vehicles (HDVs) such as trucks and buses in mid-May. The file is currently being debated by the European Parliament and Council, and MEPs are set to vote on it next week. It’s an important piece of legislation: HDVs account for 26% of road transport emissions in the EU and, as leading companies point out, these emissions can cost-effectively be reduced by at least 20% with technologies that are available today or will soon be.

There are good elements in the work of the Parliament, but green groups are concerned about a huge lobby push by the gas, oil, biofuel and truck industry to include a so-called ‘Carbon Correction Factor’ (CCF) for trucks and buses running on biofuels. Supporters of a CCF claim that efforts to promote and use renewable fuels, such as advanced biofuels, should be incentivised under the CO2 standards for HDVs.

There are different CCF proposals but essentially it means that if a truck is sold or registered in a member state with a high share of renewable advanced fuels, a CCF will be applied giving a better CO2 performance to that vehicle, and thus to the manufacturer, resulting in a lower (read: easier) CO2 target for 2025 and 2030.

It may sound like a good thing to reward advanced fuels – and we support some incentives for sustainable advanced fuels. But doing it under the CO2 standards for HDVs would not achieve this goal and would only end up weakening the fuel efficiency standards. There are three reasons for that.

First, advanced renewable fuels are mandated under the REDII. Recently agreed (in June 2018), the REDII sets a mandate for the use of advanced fuels, including advanced biofuels and renewable synthetic fuels. When used in the transport sector, these fuels will be eligible for financial support, will be credited and will count towards the EU renewables targets, provided they comply with a set of sustainability criteria. There’s an additional reward for advanced biofuels with a multiplier (they can be counted twice). Basically, what the CCF does is rewarding the biofuels industry for something they have to do anyways. So the proposed CCF won’t even lead to higher shares of sustainable advanced biofuels, but it will reduce the stringency of the regulation. 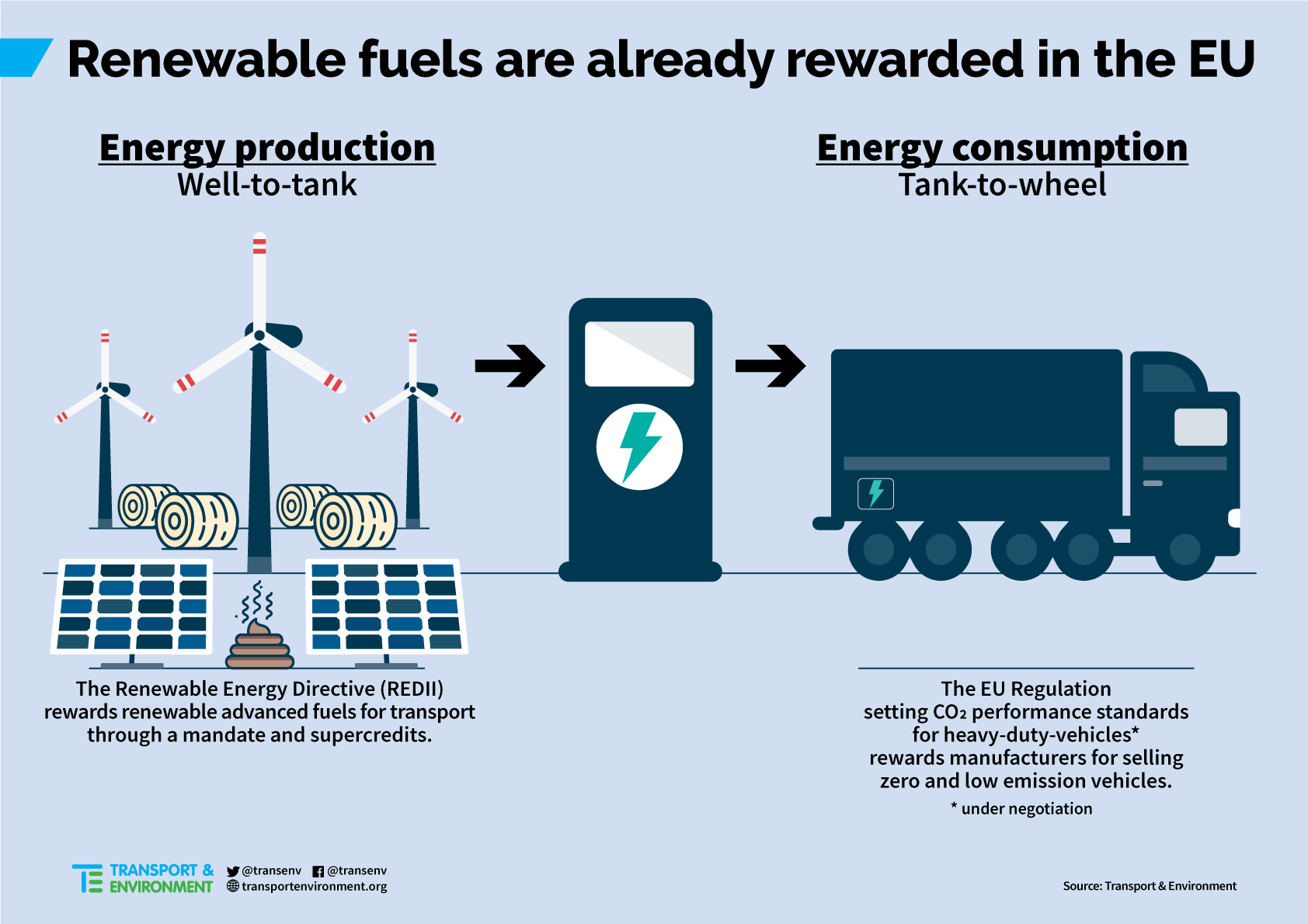 Also, under the proposed HDV legislation, zero and low-emission vehicles (ZLEVs) are already credited. Any HDV with tank-to-wheel emissions below 350 gCO2/km is rewarded – the lower the emissions, the higher the credits are.

Second, EU climate law already rewards the use of renewable fuels. The Climate Action Regulation (‘CAR’, previously the Effort Sharing Regulation, covering the sectors outside the EU ETS) considers renewable fuels used in transport to be zero-emissions. That’s a huge (and excessive) incentive for biofuels especially since we know biodiesel is currently 80% worse than diesel, not 100% better.

If such fuels were to be rewarded again under the HDVs standards, it would lead to ‘triple-crediting’: first under REDII, then CAR and now again under HDV CO2 standards.

Third, it would be impossible to guarantee the use of renewable fuel in the truck in practice. The member states and fuel suppliers are responsible for the uptake of advanced renewable fuels in their respective countries. On the other hand, manufacturers are responsible for improving efficiency of the trucks. It is impossible for a manufacturer to prove that every single vehicle they sell has used a specific type of fuel.

It would be even more impossible to prove that new trucks use renewable fuels at all times and during their entire lifetime. For instance, a vehicle might fuel up in a country with a lower supply – or even no supply – of renewable advanced fuels; vehicles might be sold in the second-hand market somewhere else or they may be retrofitted to use more than one fuel type.

Also, based on the proposals for CCF, it would become very attractive to buy and register a truck in a country with a high renewable fuel share in filling stations and then use it in another country. The CCF is thus an open invitation to gaming. If we have learned anything in the last three years it’s that we shouldn’t give the car and truck industry that chance.

The plenary of the European Parliament didn’t think a CCF was a good idea for the car CO2 regulation – adopted recently – and voted it down. They should do the same for HDVs.