The Scottish government will present its plan for the EU-UK divorce to the UK government today (19 January) after Theresa May said that Britain would not seek continued membership of the Single Market.

Are you concerned that Scotland could be collateral damage to a punitive response to Brexit from other EU countries?

Scotland has been collateral damage for 300 years, I think, in terms of our relationship with the United Kingdom government, in different shapes and forms. We’re trying to be constructive here and we’re trying to use the mechanisms that are available to us.

You have prepared a plan for Brexit. What is the bottom line?

We’re basically trying to persuade the United Kingdom as a whole to retain membership of the single market and be in the customs union. If the UK doesn’t do that, then we want to persuade the UK to allow a differentiated position for Scotland so that we could remain as members of the single market. Whether we were in the customs union or not depends on what the UK does. We recognise that we would have to follow whatever the UK did on a customs union basis. 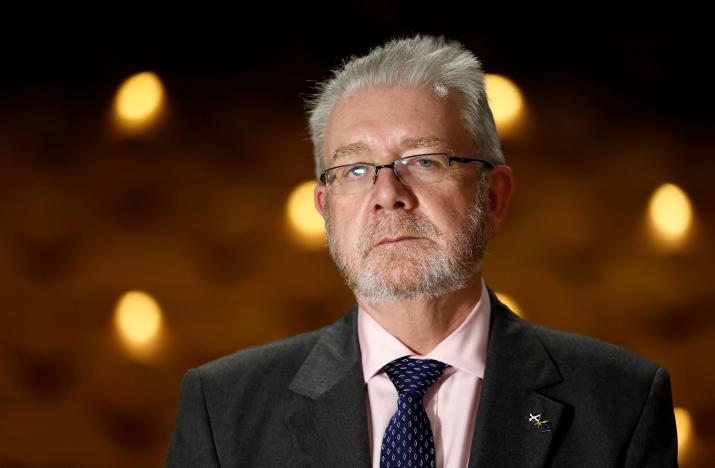 So you could be out of the customs union but still have access to the single market?

A bit like Norway. Norway is a part of the single market  but not in the customs union. What we’re saying is that we recognise as of now Scotland can’t apply to be a member of EFTA because we’re a nation, we’re not a state. But we’re suggesting that the United Kingdom, as a state, could negotiate the EFTA position.

But you’re really in quite a supplicant position. Isn’t it just a UK government decision?

Well, the ramifications of leaving the EU have implications for the UK government. The act of leaving the EU puts into question a whole range of powers, key areas that are part of the EU’s competences. Because of the nature of the Scottish parliament and the terms of the 1997 Scotland Act, anything that isn’t listed as reserved is devolved. The repealed competences  would go automatically to Scotland, unless for some reason the UK decides to go another direction. There’s been no indication of that.

The UK as a member state is unusual in that it has two separate justice systems and we are used to administering EU law into Scottish law on a regular basis. That would continue. Scottish law is distinct and different from law in England.

There was a Westminster cross-party committee last week which supported immigration being devolved to Scotland,  so that was a differential position in terms of people being able to come and live and work.

Theresa May can’t let that happen because there is a porous border between Scotland and England.

But didn’t that border pre-exist?

If Scotland had freedom of movement, wouldn’t people just go into England across the Scottish border, which has no controls?

The United Kingdom focuses a great deal on immigration issues. They will have to have a new system of how they’re going to administer or police this system anyway. It’s likely, although I don’t know, that the system they might want to put forward would be a system where people could have permission to work through work permits. Why couldn’t you have a different system where there was more flexibility for Scotland?

So, the Scottish government’s position is that you would like to have a different set of immigration rules to England, which would include freedom of movement for your citizens?

Yes, we want that because we understand that’s part of having access to the single market. 17% of our employees in the tourism industry are EU nationals, so we’re quite aware of the economic contribution that the people make.

But isn’t your only weapon the threat of another Scottish independence referendum?

We made it quite clear that independence isn’t our starting point. Our preference is to get a UK deal as a whole, which is in the single market and customs union. If we can’t do that, then we want a differentiating position for a Scotland, which is obviously out of the EU, but a member of the single market along the lines of EFTA membership.

If all of these are rejected, then it calls into question the capability of the United Kingdom to respond to anything that’s been said. The idea that a country, a nation of 5 million people could be taken out of the EU….

But you’ve got SNP MPs in Westminster, they are going to have their say for you.

We think, politically, the Scottish parliament should have a view as to the proposition that’s put forward.

We’ve consulted on a bill for a referendum of independence if it’s required. We’re not there yet. We have to take the United Kingdom at their word. They have said that they will fully consult with us and that’s the process we’ve embarked on.

What do you want from the European Union institutions?

Should we be able to pursue a differentiated position for Scotland, that they understand why that is. Some of it has been about trying to help explain that we already have devoted powers over our justice, health, agriculture and fishing interests. Post Brexit it’s Scotland they’ll be dealing with, not the United Kingdom.

We’re not powerless, we just have a position that’s yet to be understood in terms of where Brexit would leave the internal operation of the United Kingdom. And also the fact that, within an ever-changing Europe, with lots of tensions and lots of pressures, there is a progressive, pro-European party in the UK- a country of 5 million people who still want to actively engage as well.

Gurría: 'Brexit damage is only beginning'

Have you given up on the idea of continued EU membership for Scotland?