Back May’s Brexit deal and you get more time, EU leaders tell Westminster 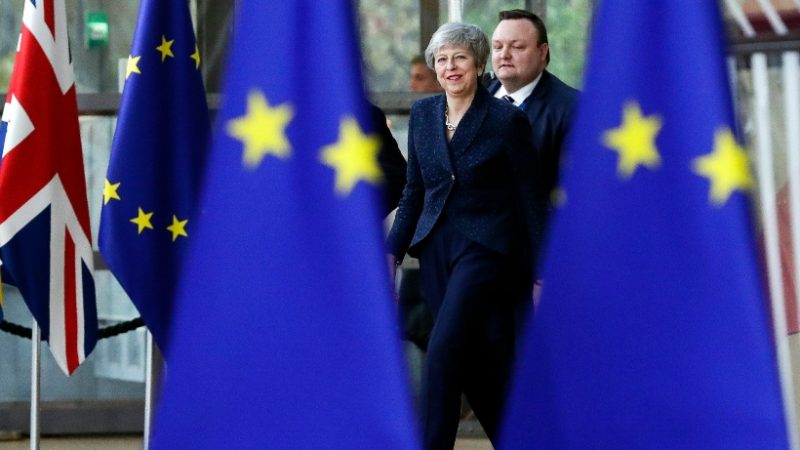 EU leaders will grant the United Kingdom a possible eight-week delay to Brexit provided that the House of Commons passes the Withdrawal Agreement next week, according to conclusions agreed at the European Council summit on late Thursday (21 March) night.

However, the offer comes with plenty of strings attached and says that, if Theresa May’s deal flops in the UK parliament, the EU would support a shorter delay, until 12 April, to give London time to ‘indicate a way forward’ or just choose to leave the bloc without a deal.

The conclusions agreed by EU leaders stated that the UK would be given until 22 May to finalise its departure from the bloc, confirming that the withdrawal would not take place on the original Brexit date of 29 March if the deal is endorsed in the UK.

This option would, however, only be triggered provided “the Withdrawal Agreement is approved by the House of Commons next week”, the conclusions state.

But the conclusions say that “given that the UK does not intend to hold elections to the European Parliament, no longer extension is possible”.

The extension is contingent on the UK making a final decision on its future path by 12 April, the final date when it would have to decide whether to organise European elections.

In a further twist, the EU has left open the possibility of a longer extension if the UK decides to hold European elections and “calls for work to be continued on preparedness and contingency at all levels for the consequences of the United Kingdom’s withdrawal, taking into account all possible outcomes,” the summit conclusions state.

After a bilateral meeting, in which European Council President Donald Tusk briefed May on the conclusions, the British prime minister has ‘accepted the extension scenarios’ put forward by the EU27, Tusk told reporters after the meeting.

One of the proposed deadlines was 7 May, put forward by Belgium and France, both of whom have domestic elections looming, two days before the informal gathering in Sibiu, Romania, dubbed a ‘Future of Europe’ summit, where EU leaders are set to discuss whether to move away from qualified majority voting in EU foreign policy matters.

A request for a three-month extension until 30 June, contained in May’s letter to Tusk, was quickly rejected by leaders, who were then left shocked by the Prime Minister’s failure to offer any answers to their demands for alternatives if her Brexit plan is defeated again.

In her own press conference, May repeated her insistence that the UK should not take part in the European elections.

“I don’t believe it’s right to be in a situation of taking part in European parliamentary elections three years from people having voted to leave the EU. I think they would rightly ask why it was that they were being asked to elect representatives to an institution which they had voted to leave,” she said.

The confusion brought a new dynamic to the Brexit discussions. One EU diplomat quipped that after nearly three years of a united EU facing off against a fragmented UK position, the EU suddenly found itself with a number of competing voices. “So many voices. It’s like Tinder for politics,” the EU diplomat joked.

Arriving for the European Council meeting at midday, French President Emmanuel Macron hinted that a third rejection of the Brexit deal would lead to a ‘no deal’ scenario: “We have to be clear. We can discuss and agree a technical extension in case of a yes vote.”

Another failure by British MPs to back May’s deal “will guide everyone to a hard exit.”

“In case of a no, it will directly guide everybody to a no deal. For sure. This is it. We are ready,” Macron told reporters in Brussels.

However, in their pre-summit comments, most EU leaders struck a more conciliatory tone.

Earlier on Thursday morning, German Chancellor Angela Merkel told her MPs in the German Bundestag that she is open to a “short extension” to the Brexit deadline on certain conditions.

Merkel also told the German parliamentarians that the EU is committed to close cooperation with the UK in the future: “The door to closer cooperation is wide open.”

Diplomats also played down the significance of the French President’s remarks: “Avoiding a disorderly Brexit is still the top priority,” one EU diplomat told EURACTIV.

May is expected to put her Withdrawal Agreement back to the House of Commons early next week, seeking to overturn a 149 majority last week. However, her statement on Wednesday night, in which she pinned the blame for the delay squarely on UK MPs, appears to have strengthened the resolve of her opponents.

The UK Prime Minister also hinted that she would resign if her deal, agreed with EU leaders last November, was again voted down.

The prospect of the deal being rejected for a third time prompted talk of a fresh emergency summit at the end of next week.

One diplomat told EURACTIV that a new summit would be a sign that a ‘no deal’ Brexit had been avoided.

“Summits are for solutions. If we are here next week, then that means we are going to think creatively.”

Meanwhile, following his own meeting with the EU’s chief Brexit negotiator, Michel Barnier,  in the morning, Jeremy Corbyn, leader of the UK opposition Labour party, told reporters in Brussels he was seeking to “construct a majority that will prevent us from crashing out”.

Asked about whether there is also a special place in hell for MPs if they don’t back the agreement, Tusk responded: “According to our pope, the hell is still empty and it means there is a lot of space.”

One response to “Back May’s Brexit deal and you get more time, EU leaders tell Westminster”