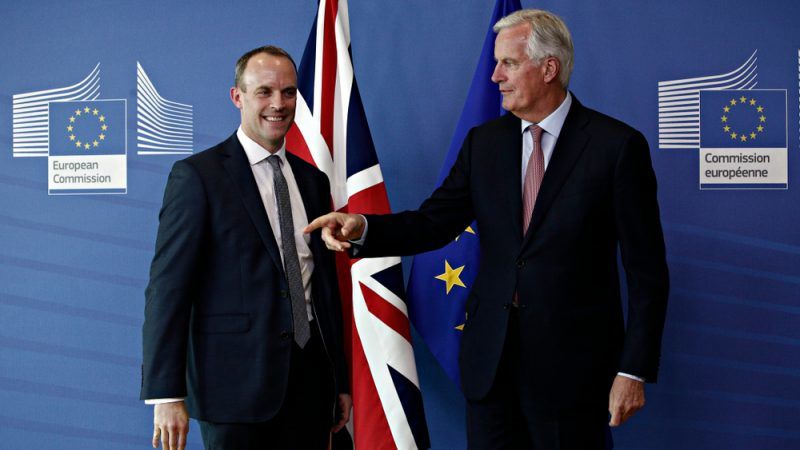 Barnier, who leads the European Commission’s Article 50 Task Force, was speaking following a meeting of the General Affairs Council where he presented the Commission’s view of the White Paper to EU affairs ministers.

“We can use elements (of the White Paper) to build common ground,” said Barnier, but he quickly added that “there are some elements that do seem to contradict the principles agreed by the EU-27…the indivisibility of the four freedoms.”

“We need to see if the White Paper proposals are consistent with the principles set out by the EU-27,” he said. These focus of maintaining the integrity of the bloc’s single market and the customs union, the indivisibility of the four freedoms, and the autonomy of EU institutions.

“Our main aim is to protect the integrity of the single market,” he repeated.

Eleven ministers and ministerial aides, including Foreign minister Boris Johnson and Brexit minister David Davis, have resigned since the White Paper was agreed, putting Theresa May’s government on the brink of collapse.

Meanwhile, several of May’s ministers have indicated that the White Paper constitutes the UK’s ‘last offer’ to Brussels.

But after a week of talks with UK officials, and the first meeting between Barnier and newly appointed Brexit minister Dominic Raab on Thursday, which Barnier described as “useful and very cordial”, the Commission negotiator insisted that the main priority was to conclude the Withdrawal Agreement, of which he said 80% has already been agreed.

Finalising the Withdrawal Agreement was the “prerequisite for creating an orderly withdrawal and for creating the trust that we need for a future partnership,” Barniersaid.

The White Paper seeks to keep the UK in a single market for goods, with a separate trade deal on services and a new treaty on security and defence co-operation.

“How could the EU delegate the collection of tariffs to a country no longer in the EU,” he questioned.

As ever, the main sticking point remains how to avoid a ‘hard border’ between Northern Ireland and the Republic.

Speaking in Belfast on Friday (20 July), Theresa May repeated that the EU’s proposal for a border in the Irish Sea was “unworkable” and called for Barnier’s team to come up with new proposals.

Resolving the Irish border question is the “most serious and difficult problem”, said Barnier.

“We do not want a border but we do want checks on goods since the UK wants to leave the single market,” he added.

The fragility of the May government has prompted speculation that the chances of a ‘no deal’ Brexit have dramatically increased. That message appears to have been picked up by the Commission, which stepped up its planning for a ‘no deal’ scenario on Thursday, publishing a 17-page advisory note for businesses and citizens on what to expect.

“We must step up planning for all scenarios,” said Barnier, hinting that the EU-27 would take an economic hit unless the UK opts for a ‘Norway Plus’ model that would keep it in the single market.