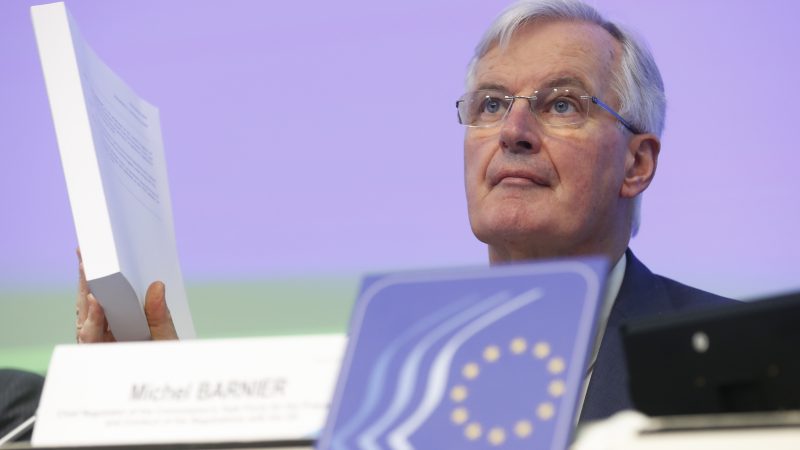 Michel Barnier, the European Chief Negotiator of the Task Force for the Preparation and Conduct of the Negotiations with the United Kingdom under Article 50 shows a final text of Negotiation as he gives a speech in front of 540th European Economic and Social Committee Plenary Session in Brussels, Belgium, 23 January 2019. [Olivier Hoslet/EPA/EFE]

The European Union’s chief Brexit negotiator Michel Barnier said that the “backstop” provision in the agreement for Britain’s withdrawal from the bloc could not be time-limited, since that would defeat its purpose of guaranteeing no hard Irish border.

His comments, made on Germany’s DLF public radio, undermine the hopes of some in London that Prime Minister Theresa May could win pro-Brexit legislators for her deal by securing a time limit to the no-border commitment.

Barnier said the withdrawal agreement, roundly rejected by Britain’s parliament two weeks ago, was the best one available given the “famous red lines”, including an end to freedom of movement and to single market membership, that May had set out to define the future relationship.

Barnier, who is due to meet German Chancellor Angela Merkel for talks in Berlin on Thursday (24 January), said that the commitment, seen by Dublin as an essential guarantor of peace on the island, had to be credible.

Another option being floated by some in London, for the border issue to be regulated in a separate bilateral deal with Dublin, was also impossible, since the border between Ireland and Northern Ireland would in future be an EU frontier, he said.

“We have to maintain the credibility of this reassurance,” he said. “It cannot be time-limited… It’s not just about Ireland.”

The Irish Independent newspaper said on Thursday that hundreds of Irish police officers could be deployed to guard the border if Britain left without a deal. It cited a meeting of Police Commissioner Drew Harris with senior staff on Wednesday.

He added that if Britain’s red lines changed, there would be scope for changes to the political declaration on the intended future relationship between Britain and the EU that accompanies the withdrawal agreement.

“If something changes with the red lines, then we are ready to talk about that,” he said. “We can’t make any compromises on the fundamental principles. We can’t dilute the single market or split the EU.”