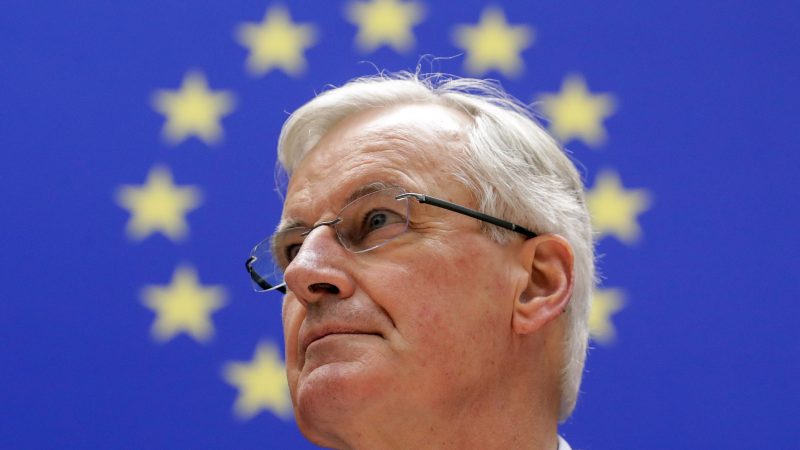 File photo. European Commission's Head of Task Force for Relations with the United Kingdom, Michel Barnier attends a Seminar for a Business Master Class on Brexit at the European Parliament in Brussels, Belgium, 26 February 2020. [Stephanie Lecocq/EPA/EFE]

Chief EU negotiator Michel Barnier said on Friday (13 March) that he had sent an “ambitious” first draft of what could be a new post-Brexit trade deal with Britain to EU capitals.

The European Union member states will now have to decide whether and how they want to modify Barnier’s proposal, as he pursues his negotiations with London.

But even if the Brussels veteran’s text finds favour with MEPs and the 27 capitals, there are provisions that are unlikely to be acceptable to Number 10.

The draft — obtained by AFP — would ensure Britain does not diverge far from EU state aid, environmental, labour and quality standards, while trade will be overseen by a “Specialised Committee on the Level Playing Field.”

But, in the case of any dispute over interpretation of EU law, the eventual deal’s arbitration committee would have to defer “to the Court of Justice of the European Union to give a ruling on the question.”

London has been adamant it will not sign up to any deal that gives the Luxembourg-based court jurisdiction over Britain.

If the draft is retained, the deal would also ensure both sides “authorise the fishing vessels of the other party to engage in fishing activities in its waters” according to agreed quotas.

But Prime Minister Boris Johnson’s government insists it wants a simple free trade agreement between “sovereign equals” and is prepared to sacrifice access to the EU market in exchange for freedom to write its own laws.

As well as refusing the jurisdiction of the ECJ, Britain also insists it will regain control over its coastal fisheries.

Next week’s face-to-face round of EU-UK negotiations in London has been cancelled because of the coronavirus pandemic, but both sides are keen to press on.

There is also an unspoken race to publish a comprehensive draft proposal as both sides seek to gain the initiative in a tricky months-long negotiation.

“We’ve sent a draft agreement on new partnership to EP and Council for discussion,” Barnier tweeted, referring to the European Parliament and the member states.

“It shows ambitious and comprehensive future relationship is possible. We must give ourselves every chance of success,” he said.

“We will publish the text after our exchanges and look forward to working with the UK.”

Some in Brussels want Barnier to rush out Europe’s vision of a close working relationship with Britain, but some member states argue he should wait to see Britain’s proposal.

“Publishing the draft is not usual practice at this stage. It will only show that the EU and UK are on different tracks,” one European diplomat told AFP.

“Barnier thinks it will show an advantage but it doesn’t. It will show that what we have is fundamentally different than what they have. If we do (publish), doing so before the UK is especially not wise.”

Britain and the EU want to conclude some kind of new trading arrangement by the end of the year, when a post-Brexit transition period ends and European trade rules no longer apply.

Many businesses on both sides of the Channel are keen for a close relationship to continue, with matching rules, to minimise disruption to supply chains.

But Johnson insists Britain is ready to pay an economic price for the right to set its own laws and has warned it will walk away rather than accept anything more binding than the kind of deal the EU signed with Canada.

In Brussels, officials are far from confident that any kind of comprehensive deal can be done in time.

“Each side wants to show their domestic audience how ambitious they are to get the deal done by the end of the year,” the diplomat said.

“We are afraid it will also create a false sense of hope for companies, which is ill-advised,” he added, while conceding that his government would support the EU’s decision.