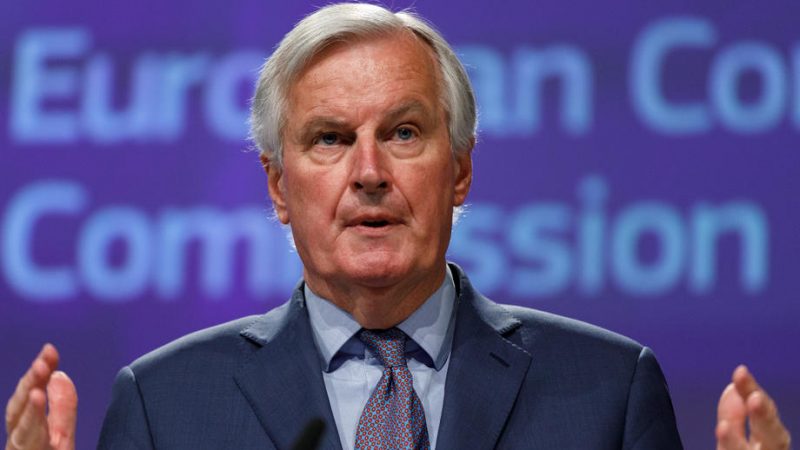 Michel Barnier, EU Chief Brexit Negotiator, speaks about the trade agreement with the UK during a press conference in the European Commission in Brussels, 24 April 2020. [EPA-EFE/OLIVIER MATTHYS / POOL]

A frustrated Michel Barnier, the EU’s chief Brexit negotiator, came close to accusing London of derailing talks on a future EU-UK trade pact on Friday (24 April), warning that there were “serious difficulties ahead” if a ‘no deal’ scenario is to be avoided in two months’ time.

Barnier complained that, with less than two months until a crunch meeting between leaders in June, the week of talks had been “disappointing”, with “no progress on fisheries”, and that the UK was yet to table any legal proposals on the issue.

“On this essential topic the UK has not put forward a legal text,” said Barnier, adding that “the EU will not agree to any future partnership that does not include a balanced and long-term agreement on fisheries.”

“That should be crystal clear to the UK.”

Already facing a very tight deadline after the UK formally exited the EU on 31 January, the talks on future trade and political relations have almost ground to a halt because of the coronavirus pandemic.

Only one round of face-to-face talks was held by Barnier and UK counterpart David Frost before the spread of the pandemic prompted lockdown on both sides of the Channel.

Further teleconferences have been scheduled for the weeks beginning 11 May and 1 June before a planned ‘High Level’ meeting in June at EU leaders’ level, where the two sides will take stock of progress.

The mid-June meeting has been earmarked by the UK team as the time when they will decide if a deal can be brokered before the end of 2020, or if they will leave on ‘no deal’ terms.

With both the EU and UK economies facing a major hit as a result of the COVID-19 pandemic, Barnier said it was important to broker “a smart agreement to cushion the shock”.

However, Boris Johnson’s government has repeatedly stated that it will reject any extension of the post-Brexit transition period – during which the UK remains part of the single market – beyond December 2020.

“The consequence of this decision is that the clock is ticking,” said Barnier, adding that “the UK cannot impose this short brief timeline but then not make progress on important areas for the EU.”

The slow pace of talks has prompted speculation that the EU could request an extension to avoid any loss of face by Johnson and avoid a ‘no deal’ scenario.

“We are not closing the door to an extension of the transition period,” Barnier said but added that no decision on this would be made until early June

If an extension is agreed, the UK would be required to make a flat-rate contribution to the budget to retain access to the single market, but would not be party to the next seven-year EU budget, now expected to be radically increased to support the bloc’s economic recovery from the coronavirus crisis.

Around 40 video conference calls were held between EU and UK officials this week. While the EU’s 350-page draft text was made publicly available, the UK has published a series of sector-specific proposals but insists on keeping its negotiating mandate confidential.

“Our objective for tangible progress…has only been very partially met this week,” Barnier told reporters, adding that “the UK did not wish to commit seriously on a number of fundamental points”.

He also accused UK officials of seeking to row back on commitments made in the Withdrawal Agreement.

The key points of contention focus on the so-called ‘level playing field’, under which the EU expects that the UK will commit to keeping EU standards on social and environmental policy, as well as state aid, in return for a free trade deal with zero tariffs and quotas. The UK insists that it must have the right to pursue its own regulatory approach.

Barnier complained that UK officials had “failed to engage substantially” on the matter, adding that “there will be no ambitious trade deal without an ambitious level playing field.

The EU chief negotiator added that the two sides were also “very far apart on governance”, while little progress has been made on the role of the European Court of Justice, and on future police and judicial co-operation.

Barnier added that Brussels also required “clear evidence” that the UK is advancing with procedures for new customs arrangements between Northern Ireland and the Republic.