Billy Bragg: European Commission should buy up the Daily Mail 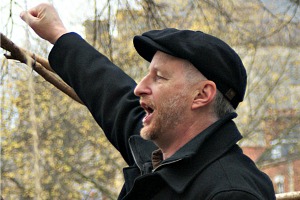 The influential British singer-songwriter Billy Bragg has advised the European Commission to buy up the UK’s Daily Mail newspaper and use it to tell the truth about the EU, in an interview with EURACTIV.

The Mail, a rightwing newspaper with a campaigning Eurosceptic and Climate-sceptic outlook, is not afraid to court controversy. It recently attacked the patriotic convictions of the UK Labour Party leader Ed Milliband’s dead Jewish father, Ralph.

Bragg said that the paper was institutionally cynical and provided a “daily diet of xenophobia”. If he could give Brussels one piece of advice, it would be to “buy the Daily Mail,” he said. “Take it over, install a new editor and start putting facts about the European Union in there.”

A referendum on leaving the EU which the Mail and other UK newspapers had campaigned for was elevating an issue that the public barely cared about, he argued.

“The reason the Conservative party is offering a referendum is because Rupert Murdoch [owner of the Sun and the Times], the Barclay Brothers [who own the Telegraph Media Group] and Lord Rothermere [owner of the Daily Mail] want a referendum,” he said. “The CBI doesn’t want it. [David] Cameron clearly doesn’t really want it. Everyone recognises that it’s an expression of the worst aspects of the ‘Little Englander’ mentality, and I think that it is an English thing as well.”

In the past, Bragg has written songs about the conservative influence of the British press, such as 'It says here'.

"The Daily Mail, the Times, the Telegraph, the Daily Express are just pouring scorn on anything that is not British," he said, when the meaning of such terms was in flux. "Mo Farah is British. Maybe Scotland isn’t British. All these things are moving."

Bragg's political interests go beyond the media and he also praised the EU’s stand on bankers bonuses, one of the things that the Conservative Party “really hate about the European Union,” he said.

Brussels “supplies a lot of accountability that we don’t get from our government, which is much more neo-liberal than the consensus in Europe,” Bragg explained. “It has actually been the legislation of the European Union that has held up the rights of minorities, workers and women. That’s what they are complaining about: the ‘red tape’ that keeps them clean.”

In 2006, Bragg went from songwriter to author, penning a book called ‘The progressive Patriot’ in which he called on British socialists to reclaim patriotism from the right, an idea with a lineage stretching back to George Orwell.

The popular pop-folk singer developed the theme in songs such as ‘Half-English’, with its embrace of England’s cultural diversity and melange of traditions.

But he insists that he is also a European and “happy to make that sacrifice of sovereignty” involved in EU membership if it means that his son never has to fight in a European war, as his father did.

Bragg argues that the failure of the UK’s left to engage in identity politics has created a vacuum, filled by rightwing forces such as the UK Independence Party at the polls and, currently, the English Defence League on the streets and potentially in the pop charts too.

“The left is colour-blind,” Bragg said. “It doesn’t do flags. It has no point of connection with that debate whatsoever.”

But as a long-standing socialist, he added it was “very important” for young people to vote in the European elections. “I don’t buy the Russell Brand thing,” he said, in reference to the comedian’s recent call for an electoral boycott.

To read a full version of the interview, click here.

A potential British exit from the European Union came to the top of the political agenda in January when Prime Minister David Cameron said that Britain must use the upheaval created by the eurozone crisis to forge a new relationship with the European Union.

22 responses to “Billy Bragg: European Commission should buy up the Daily Mail”