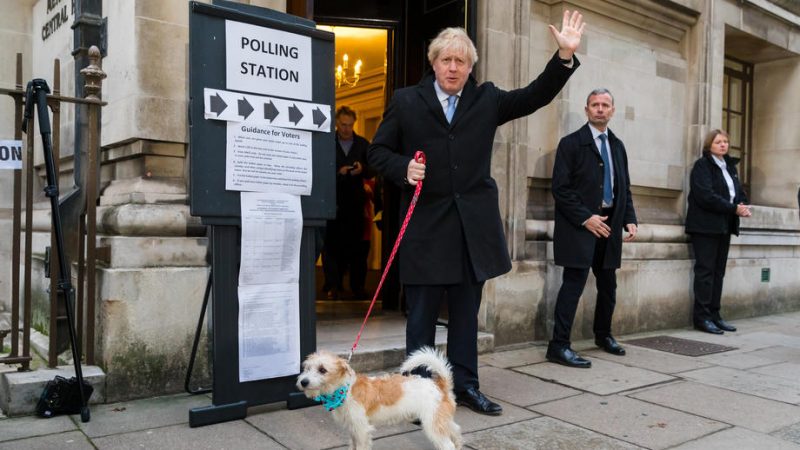 The UK will leave the EU by January after Boris Johnson’s Conservative party won a decisive victory in Thursday’s (12 December) general election.

The Conservatives are on track to win a 70 seat majority, with around 360 of the 650 seats in the House of Commons on 44% of the vote. A victory on that scale would make it certain that the UK will leave the EU on or before 31 January.

Johnson has promised to bring his Brexit Withdrawal Agreement back to UK lawmakers before Christmas to start the ratification process.

Although opinion polls during the campaign had consistently predicted a majority victory for Johnson’s party, the size of the victory is wider than expected. The poll also suggests that Labour will fall to around 200 seats and 34%, its worst performance since the 1930s.

The Liberal Democrats, which promised to revoke Article 50, are set to gain one seat but saw their party leader Jo Swinson narrowly lose her seat in Scotland.

Johnson’s campaign slogan of ‘Get Brexit Done’ appears to have effectively repeated the result of the 2016 referendum. The north and midland regions of England, which voted overwhelmingly to leave the EU, are set to deliver a string of gains for the Conservatives.

In one of the first constituencies to be declared, Blyth Valley, a former mining town in the northeast and a Labour heartland, fell to the Conservatives for the first time since its creation in 1950. The Conservatives also made gains in Wales, which also voted to leave the EU. London and Scotland, which recorded the strongest pro-Remain majorities, also saw swings to Labour and the Liberal Democrats.

“This One Nation Conservative government has been given a mandate to unite this country and take it forward,” said Johnson following his own election.

The decisive nature of the result, which is set to give the Conservatives their largest governing majority since 1987, will be welcomed by EU leaders anxious to finally close the chapter on a Brexit process that has seen the UK’s exit from the bloc, originally planned for March this year, extended twice.

However, if the immediate battle over the UK’s EU membership is over, others seem about to start.

Talks on a post-Brexit trade and political agreement are set to begin in early 2020, with the EU’s chief Brexit negotiator Michel Barnier suggesting that only a minimalist trade deal could be finalised before the end of 2020, when the transition period foreseen in the Withdrawal Agreement ends.

Meanwhile, the Scottish National Party are poised to sweep the board with 55 of the 59 seats north of the border, dramatically increasing the prospects of a second referendum on independence.

John McDonnell, Labour’s finance spokesman and chief ally to the party leader Jeremy Corbyn, argued that voter frustration over Brexit was responsible for the result. However, the personal unpopularity of Corbyn, who announced his plans to resign the leadership in the coming months, was also blamed by many Labour MPs.

“We’re going to hear the Corbynistas blame it on Brexit and the Labour uber-remainers blaming Corbyn. Both are to blame for what looks like a terrible night for Labour. Both have taken for granted Labour’s heartlands. Sorry we couldn’t offer you a Labour party you could trust,” said Caroline Flint, a former Europe minister in Gordon Brown’s government, who lost her own seat in the north of England.