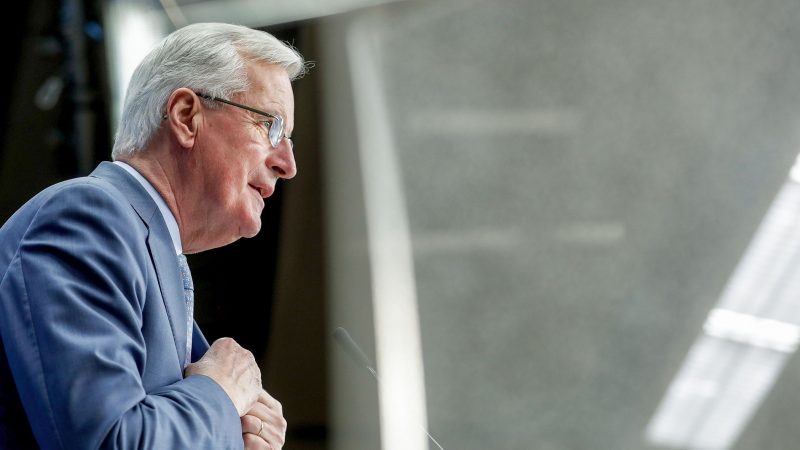 Michel Barnier, EU's chief negotiator with the UK,, gives a press conference after a General Affairs Council in Brussels on 25 February 2020. [EPA-EFE/STEPHANIE LECOCQ]

The bloc will seek to broker “a fair and balanced partnership with a robust framework of governance”, EU chief negotiator Michel Barnier told reporters. He added that the talks would be “complex, demanding and difficult”.

“We are ready to offer a highly ambitious trade deal to the UK,” said Barnier.

“But the UK cannot expect high quality access to the single market if its not prepared to accept guarantees that competition remains open and fair, free and fair.”

The mandate agreed by ministers at the General Affairs Council is similar to the draft set out by the European Commission earlier this month.

The EU is demanding that the UK maintain “common high standards, and corresponding high standards over time with union standards as a reference point”, while provisions on fisheries “should uphold existing reciprocal access conditions, quota shares and the traditional activity of the Union fleet.”

However, it has left out references to seeking a deal on regulatory equivalence for financial services by June 2020 and a data adequacy ruling by the end of 2020

In London, meanwhile, Boris Johnson’s government signed off on its own mandate, which will be formally published on Thursday (27 February).

UK ministers have repeatedly stated that the country will maintain “high standards” in a raft of sectors including competition policy, agriculture, social, environmental and labour standards, but will not agree to be bound by EU regulatory standards. The first round of talks is expected in Brussels next Monday, with a second round to be held in London later in March.

The early rounds of talks are likely to focus on the key disagreements between the UK and EU on regulatory standards, referred to as ‘the level playing field’, and fisheries.

Meanwhile, the National Farmers’ Union (NFU) urged the London government not to undercut EU agriculture standards in order to strike a trade deal with the United States. Washington sees the UK deal as an opportunity to increase its agriculture exports, including chlorine-washed chicken, a key sticking point in its trade talks with Brussels.

“We must not allow UK farm high standards to be undermined by imports of goods which would be illegal for our farmers to produce here,” President Minette Batters told an NFU conference on Tuesday.

“To sign up a trade deal which opens our fridges to food which would be illegal to produce here would be morally bankrupt,” Batters added.

The different negotiating stances, combined with a tight timeline – negotiators have ten months to agree and ratify an EU-UK trade pact before the post-Brexit transition period ends on 31 December – have increased concerns of a ‘no deal’ scenario and a new cliff-edge for businesses and individuals.

“The pressure is not being put by us. The British government is putting the pressure of time on these negotiations,” Barnier told reporters.

A report published on Tuesday (25 February) by the UN Conference on Trade and Development (UNCTAD) warned that both sides faced an economic hit as a result of lost trade post-Brexit.

The report forecast a 9% drop in UK exports to the EU even if a ‘standard’ free trade agreement eliminating tariffs and quotas is agreed, because of so-called non-tariff measures (NTMs).

It added that “even in the case a “standard” free trade agreement is signed, such exports could drop by 9%. Exports from developing countries into the United Kingdom, and to a much smaller extent into the European Union, could increase if the United Kingdom would not increase its tariffs for third countries.”

“The potential damage may be high,” Ralf Peters, the author of UNCTAD’s ‘Brexit beyond tariffs’ study, told EURACTIV.

Peters pointed to the EU-Canada (CETA) trade deal, on which the UK wants to model its future trade relations, as an example of the difficulty in harmonising regulatory standards.

“CETA has a committee to discuss new regulations and mutual recognition. But that takes a lot of time..which is not on the side of the UK and EU,” he said.

Peters added that the EU and UK teams could seek to prioritise certain sectors, including machinery, as well as medical and pharmaceutical products which have “quite demanding NTMs”, he said.