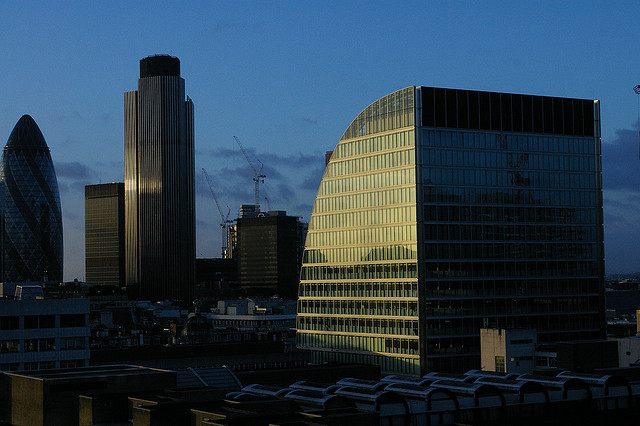 The City of London. [Pulseman/Flickr]

If there is a symbol of British ambivalence to Europe then it may be the euro itself.

The capital of euro trading prospers outside the eurozone, but London’s dominance of the $5.3 trillion-a-day foreign exchange market could wane if Britain left the European Union.

While British leaders have long resisted replacing pounds with euros, traders in the City of London financial centre now buy and sell more than twice as many euros as the whole 19-member euro zone and more dollars than the United States.

For four decades, London has been the undisputed king of foreign exchange, but some investors fear that if British voters decide to leave the EU, the City would eventually lose its top position, especially in euro trading.

“If the UK left the European Union, London’s dominance of foreign exchange including euro trading would gradually decline and then end as the flows moved to Asia and other European capitals,” US investor Jim Rogers, who co-founded the Quantum Fund in 1973 with George Soros, told Reuters.

“London’s dominance of the foreign exchange market evolved historically but evolution will continue in other places if the UK leaves. It would be foolish to leave the EU, but politicians have done foolish things since the beginning of time.”

12 years after Rogers left Quantum in 1980, Soros used the fund to bet successfully that sterling was overvalued against the Deutsche Mark, culminating in Britain’s biggest financial humiliation since the sterling crisis of 1976.

On so called ‘Black Wednesday’, 16 September 1992, Prime Minister John Major was forced to pull sterling out of the European Exchange Rate Mechanism (ERM), which had been intended to reduce exchange rate fluctuations ahead of monetary union.

Fast forward two decades: European efforts to forge an enduring monetary union are at the centre of a debate within the London elite about post-imperial Britain’s place in Europe and whether it might not be worth striking out alone.

The shadow of the euro falls across Prime Minister David Cameron’s attempt to renegotiate Britain’s relationship with Europe, then hold a referendum on membership by the end of 2017.

Sold sedately for centuries at the Royal Exchange opposite the Bank of England, foreign exchange is now traded at high speed among mostly foreign banks such as Citi, Deutsche Bank, Barclays, JPMorgan and UBS.

Yet London wasn’t always king of forex: The hegemony of the pound sterling in the British empire meant that before 1914, London played second fiddle in forex to Paris, Vienna, Berlin and New York.

And London’s rise was partly due to good fortune.

As the centre for global dollar trading, it benefited from the greenback’s rise. The growth of international banking during the 1950s and 1960s put it in pole position to benefit from the foreign exchange trading boom when floating exchange rates were adopted in the early 1970s.

Since UK exchange controls were scrapped in 1979, London has thrived as a centre for everything from foreign exchange and bonds to derivatives and fund management, making it the largest net exporter of financial services in the world.

By the end of that decade Britain was top, and its dominance has strengthened ever since. Though the euro’s introduction reduced the number of currencies traded, London emerged as the global centre for the most traded currency pair, EUR/USD.

“If Britain left the EU, that trade is gone,” said one senior European diplomat, waving his hand. “The first thing Berlin and Paris would do is to sit down and say: ‘How do we bring that business back?'”

London offers by far the deepest pool of capital in the time zone between Asia and the United States, but also a feast for the global merchant: property rights, a small army of lawyers and accountants, luxury property and shopping, quality private education and a wider cultural renaissance unmatched in Europe.

To be sure, London’s trading cables and wider pull, combined with institutional inertia, mean that any shift to the continent after a so-called “Brexit” would be gradual.

“The wires that make the trading of FX electronic are all in London and so a quick move from the UK to Europe would require infrastructure spending,” said Robert Savage, the CEO of CC Track Solutions, a New York-based hedge fund with $100 million under management.

But over the longer term, he sees foreign exchange trading moving away from London and Europe if Britain leaves the EU.

“The volume of business in FX is likely to shift from the EU and UK to the US and Asia,” Savage said. “Big picture, the flow of capital is the driver of FX markets and the Asian centres are on the rise.”

Britain’s allies say leaving the world’s biggest trading bloc would be foolhardy, leaving London’s financial powerhouse subject to rules it would no longer influence and turning it into an insignificant offshore “Treasure Island”.

Opponents of the EU say London would thrive outside. They note that doomsters cried wolf in the 1990s, warning that London would wither as a financial centre if Britain didn’t dump sterling and join the euro. That did not come to pass.

For Eurosceptics, the five-year euro zone debt crisis and Greece’s near bankruptcy are evidence of a flawed monetary union that is doomed unless it integrates more deeply, a step that would consign Britain to the sidelines.

Cameron had a front row seat for Black Wednesday as a 25-year-old adviser to Britain’s then finance minister, Norman Lamont. He has promised to keep Britain out of the euro forever, and few British voters would countenance dropping sterling.

That leaves Britain firmly outside the increasingly influential 19-nation euro zone core of the broader 28-member EU. Greece’s fate was determined by Germany and France, not Britain, which has refused to contribute to any fresh bailout.

Cameron is now set on defending the City from what his finance minister calls the “remorseless logic” of eurozone integration.

“We, almost alone among the non-euro members, have no commitment to join the single currency – and no realistic prospect of wanting to do so,” that most powerful minister, George Osborne, told London financiers last month.

Osborne, who is Cameron’s heir apparent, said Britain wants “fairness between the euro-ins and the euro-outs enshrined, and the integrity of the single market preserved”.

Eurozone rules must not hurt British interests, he said.

The government’s worry is that Britain may eventually be one of the only EU members outside the euro. It can already be outvoted on regulatory issues by the euro zone if all 19 members vote together as a bloc, which they rarely do.

The risk was underlined by an attempt by the European Central Bank to force clearing houses for major euro assets to relocate from London to the eurozone.

Britain challenged the ECB, and the EU’s Luxembourg-based General Court ruled in March that the central bank did not have the “competence” to impose such a requirement. Things might look different if Britain were no longer an EU member.

Since joining the European Economic Community in 1973, British leaders have repeatedly underestimated the political will for European monetary union that led to the birth of the euro on the stroke of midnight heralding 1999.

When the Berlin Wall fell in 1989, Margaret Thatcher opposed the French idea that a common currency was the best way to tether a united Germany to Europe, though she eventually signed Britain up to the ERM in October 1990.

She was deposed the following month, after her finance minister, Geoffrey Howe, resigned with a stark warning that Britain risked being “left behind” on monetary union.

Thatcher’s successor, Major, declared “game, set and match for Britain” after securing the right to opt out of a single currency at the 1991 Maastricht summit – less than a year before Black Wednesday.

When Tony Blair won the 1997 election, his finance minister, Gordon Brown, effectively ruled out euro entry by setting out five economic tests that had been worked out with his top aide, Ed Balls, in a New York taxi.

How long Britain can sustain its balancing act of profiting from euro trading while staying out of the currency may depend on the outcome of Cameron’s referendum.