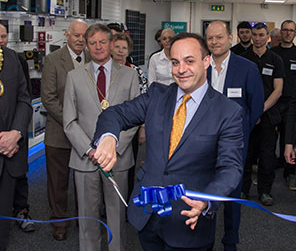 Conservative MP Stephen Phillips has cut the bond with his party - resigning as an MP in principle over Brexit, despite voting to leave the EU himself. [Stephenphillips.org.uk]

The backbench Conservative MP Stephen Phillips quit in a surprise move – despite personally having been in favour of Brexit.

Phillips resigned as an MP – prompting a byelection, the second to be called this week alone – in disgust at the government’s High Court attempts to block the UK parliament from having a say on the terms of the Article 50 negotiations.

There will now be a by-election in Phillips constituency of Sleaford and North Hykeham, in Lincolnshire. Although the Conservatives had a massive 24,000 majority there at the 2015 election, it makes the parliamentary arithmetic tricky for May, at a time when she is riding high over a disunited Labour party in the opinion polls.

Technically, the Conservative government May inherited from David Cameron after his resignation in June has a working majority of 14.

However, earlier this week Eurosceptic Conservative MP Zac Goldsmith quit his wealthly south-west London seat in protest at the government’s plans for a third runway at Heathrow.

Goldsmith will now stand again as an independent, with the Conservatives refusing to put up a candidate against him, and the Liberal Democrats hopeful of regaining the seat, which was theirs until the 2010 election.

Adding in Cameron’s own subsequent resignation, it means three Conservative MPs have resigned in the past two months alone.

So – Westminster observers point out – with May’s majority hovering just above double figures, but with the most recent opinion poll putting the Conservatives yesterday (3 November) on 41% to Jeremy Corbyn’s Labour party on 27% – a 14% lead, the new PM must be tempted to call an early election.

Legally, the parliament is in a fixed term until 2015. Yesterday, Ladbrooks cut the odds of an early election in 2017 to 2/1 on.

Odds of a 2017 general election cut to just 2/1… https://t.co/1mHaFWeoBI pic.twitter.com/DLBs4HHOYT

Meanwhile, May herself called European Commission President Jean-Claude Juncker this morning to personally inform him about the state of play following Thursday’s High Court ruling.

That phone call – which apparently last just five-ten minutes – was described as “rather short” by Juncker’s spokesman, who added that it was “appreciated.”

He added: “We’re not going to comment or speculate on the possibility of a delay. That’s a matter for the British authorities”

Despite the High Court setback, Downing Street said Friday that May still intends to fire the starting gun on official talks “by the end of March”.

Thursday’s High Court ruling – fought by the government which has already stated it will appeal –  stated that May’s government does not have the power on its own to trigger Article 50 of the Lisbon Treaty, which would formally start the process.

The decision raises the prospect of a protracted parliamentary debate before then — in a chamber that overwhelmingly opposed Brexit — although EU leaders themselves have urged a swift departure.

Lawmakers could also demand to know May’s negotiating strategy and seek to maintain stronger ties with the bloc before agreeing to invoke Article 50.

“The country voted to leave the European Union in a referendum approved by act of parliament and the government is determined to respect the result of the referendum,” said a spokeswoman for May.

“Enemies of the People”

The pound – which has tumbled to multi-year lows since the referendum -soared against the dollar and euro, standing at $1.2472 as the London markets opened Friday.

The White House urged Britain and the EU to “continue to be flexible and work this out in a process that is smooth, pragmatic, transparent and productive” following the court ruling.

The court’s decision sparked fury among newspapers that backed Brexit, accusing the judges of “betraying” the 17.4 million people who voted to leave the EU.

The right-wing Daily Mail carried pictures of the three judges above a front-page headline reading “Enemies of the People”, while its leading article called the ruling “a betrayal of common sense, the people and democracy”.

The right-wing Sun said in its editorial: “All our politicians… must ask themselves this: will they honour the biggest ballot box mandate in British history… or sniffily decide the little people cannot be trusted and thwart them?”

Nigel Farage, the interim leader of the UK Independence Party who led the Brexit campaign, urged May to call a general election and warned any lawmakers who attempted to delay Brexit had “no idea of the level of public anger they will provoke”.

“The British people are not simply going to let this incredible establishment arrogance lie,” he wrote in Friday’s Daily Telegraph.

Opposition leader Corbyn, whose party opposed Brexit, said he respected the decision of the British people.

May has so far declined to outline her negotiating strategy, insisting that showing her hand would damage her chances of achieving the best outcome.

But she has indicated she will prioritise cutting immigration, a move that EU leaders have warned is incompatible with staying part of the European single market.