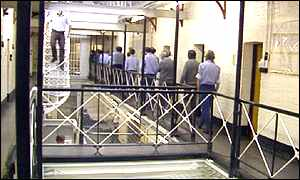 Polish and Romanian nationals made up the biggest proportion of EU prisoners in English and Welsh jails. [BBC News]

4,024 EU nationals were in prisons in England and Wales in 2017, according to data released on Wednesday (11 April) by the UK’s Ministry for Justice following a Freedom of Information request. Over half (2,464) were serving sentences of more than 12 months.

The country with the largest number of nationals in English and Welsh prisons is Poland with 911, while 607 UK prison inmates were Romanian.

That prompted a furious reaction from the pro-Brexit lobby group, Get Britain Out, which commented that it was “a disgrace that EU rules often weaken the UK Government’s ability to deport these criminals”.

It imposed “a huge cost to the British taxpayer” said Jayne Adye, director of Get Britain Out.

Brexit had been seen by some as an opportunity for the UK to toughen its rules on deportation. A government paper on EU citizens’ rights published last November stated that “deportation will be considered for those who, post-exit, commit a serious crime and receive a custodial sentence which is at least 12 months”.

However, it’s not quite as straight forward as that.

The EU’s Prisoner Transfer Agreement, which came into force in 2011, was intended to ensure that criminals serving sentences of more than four years do their jail-time in their home country. That means that nearly 1400 EU prisoners in the UK, a third of the total, are eligible to be returned home under the law.

Last November, the then Prisons Minister, Sam Gyimah, admitted that only 217 inmates had been repatriated from Britain to their home country under the scheme since 2011.

UK government sources say that other EU countries have bene reluctant to comply with repatriation requests.

Besides, it is not a one-way street. Over 800 Brits are in prisons across the EU-27, according to the most recent Freedom of Information requests. Nearly 500 are in Ireland and Spain.

INFOGRAPHIC: Who's behind bars in EU prisons?

New research published today by the Council of Europe provides a snapshot of prisoners in the EU, and where they come from.