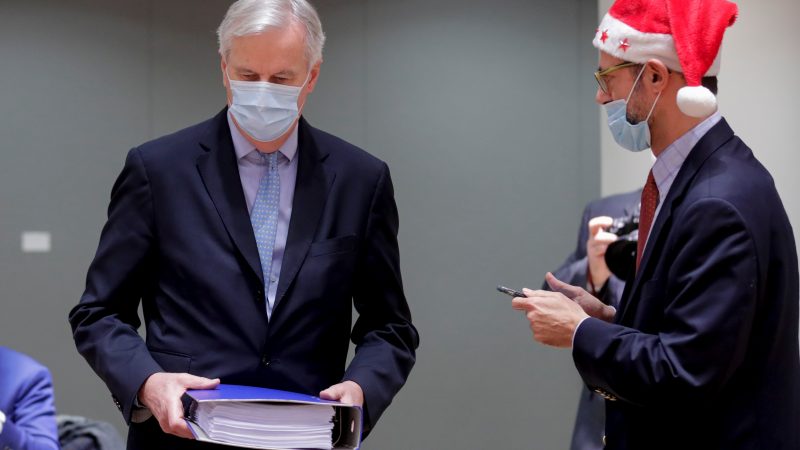 EU chief negotiator Michel Barnier (C) holds in his hands the 2000 pages Brexit trade deal next to Greek representatives (R) during a Special meeting of Coreper, to present details of the Brexit trade deal agreement in Brussels, Belgium, 25 December 2020. [Pool/EPA/EFE]

Britain and the European Union on Saturday (26 December) published the full text of the post-Brexit trade agreement aimed at governing their relationship when the UK definitively leaves the bloc’s single market in just five days.

The document, which is more than 1,200 pages long, lays out detail on trade, law enforcement and dispute settlement among other arrangements after the UK leaves the single market and customs union on 31 December.

Despite the complexity of the document, which includes explanatory notes and side agreements on nuclear cooperation and the exchange of classified information, both sides have indicated they will rush through the adoption.

However, with fishing rights one of the final sticking points in the negotiations, a UK fishing industry body condemned the deal as “paltry”.

“This should be the beginning of a moment of national renewal for us,” Frost said, reiterating that the agreement allowed Britain to leave the single market and the customs union without aligning to the EU and the European Court of Justice.

As he tweeted out the 1,246-word agreement, which had been announced on Thursday after fraught negotiations that went right down to the wire, Frost’s EU counterpart Michel Barnier called the accord: “The result of many months of intensive and dedicated work.”

In the foreword to the copy of the text published by the UK government, British Prime Minister Boris Johnson said the agreement had been “carefully judged to benefit everyone” and preserve “free trade for millions of people in the United Kingdom and across Europe”.

“While we made our fair share of compromises during the negotiations, we never wavered from the goal of restoring national sovereignty,” he wrote.

Senior UK government minister Michael Gove wrote in The Times newspaper that the deal would allow Britain to bring “innovation and investment to parts of the country that have endured economic decline”.

He added there were still “significant changes” to be prepared for by businesses in the short term.

But Britain’s fishing industry has expressed bitter disappointment, saying a five-year transition period when EU fleets will have free access to fish in UK waters, including up to six miles off the shoreline, was “pathetic”.

“In the end it was clear that Boris Johnson wanted an overall trade deal and was willing to sacrifice fishing,” said Barrie Deas, chief executive of the National Federation of Fishermen’s Organisations.

A senior member of the UK’s negotiating team conceded it would have been better to get to the end of the new fisheries transition period “a bit faster”, but added “at the end of the transition, it returns to normal arrangements, and we have full control over our waters”.

Britain’s parliament has been recalled to sit on December 30 so they can ratify the deal. A vote in favour is virtually assured after the UK’s main opposition Labour Party said its MPs would back it.

In a bid to unify his own Conservatives around the deal, Johnson has insisted the accord will stand up to scrutiny by the European Research Group, a core group Eurosceptic lawmakers in his party.

In Brussels, the European Commission has proposed the agreement be applied on a provisional basis until 28 February.

The European Parliament will be asked for its consent to the deal in 2021 and for the process to be concluded the Council, which brings together the executives of all 27 member states, must adopt the decision.

The bloc’s member states have indicated they will formally back the deal within a matter of days.

On Friday, EU ambassadors were briefed on the contents of the deal by Barnier where they agreed to write to the European Parliament of their intention to take a decision on the provisional application of the deal.