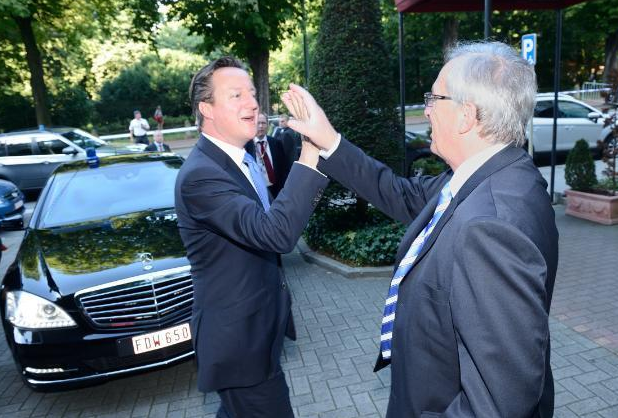 The UK could miss out on its desired economics portfolio in Jean-Claude’s Juncker’s new European Commission, instead being handed responsibility for the EU’s energy and climate change policies.

Juncker will rebuff Prime Minster David Cameron, who has lobbied hard for Jonathan Hill to be given an economics job, according to a draft European Commission line up, seen by EURACTIV.

The document is clearly not a final version and subject to change. Some jobs, such as internal market commissioner, are missing. While that post could be abolished or combined with other jobs, there are also other different versions of the leak circulating in Brussels.

Finland’s Jyrki Katainen is penciled in as commissioner for economic and monetary affairs. France’s Pierre Moscovici, also put forward for the position, will get the influential competition portfolio instead.

Other posts with economic elements such as taxation, customs and fraud will go elsewhere, according to the draft. While the UK would have accepted trade, that will go to Germany’s Günther Oettinger, Hill’s predecessor on energy, instead.

The decision, if ultimately confirmed, could push the UK closer to leaving the EU. It would be seized on by Cameron’s Eurosceptic and pro-EU rivals as further evidence of the PM’s inability to influence Brussels decision-making.

Juncker is mulling combining energy and climate change, previously two separate portfolios, in a bid to bolster the job’s importance and profile. But unlike Oettinger, Hill will not be a vice-president in Juncker’s new team.

Cameron met Juncker in Brussels as recently as last week and, according to a UK government press release, stressed again that Hill should get an economics job.

Energy is likely to be central in the EU’s response to Russia in the wake of the Ukraine crisis. Whether that will be enough to placate Cameron is unknown.

The EU needs to reduce its dependence on Russian gas before it can take a stronger position against Russian aggression towards Ukraine.

But critics will point to the appointment of Latvia’s Valdis Dombrovskis as commission vice-president for energy union and Federica Mogherini as EU foreign affairs chief as signs Hill will not have sole authority.

Climate change commissioner was a new post created in 2010 after being split from the environmental portfolio.

While the EU has led international efforts to secure a climate agreement in the past, its stock has recently fallen on the global stage. The EU and China are now making the running in global negotiations.

Cameron campaigned vociferously against the choice of Juncker as European Commission president by the Council of Ministers, forcing – and losing 26-2 – a vote on his appointment.

He reportedly told EU leaders that the choice of Juncker could lead to “Brexit”. He later described the decision as, “a bad day for Europe,” before returning to the UK to face widespread criticism.

The Tory leader is mulling whether to toughen his stance towards the EU if his calls for reform are not met.

He is considering threatening to back the out campaign in the referendum on the UK’s EU membership, according to reports.

Cameron has promised the vote in 2017 if he is elected in next year’s general election.

The pressure on Cameron has risen since the defection of Tory MP Douglas Carswell to Nigel Farage’s UK Independence Party in August.

Carswell resigned as MP for Clacton, triggering a high-profile by-election. The vote, which Carswell is expected to win easily, will take place on 9 October, which is Cameron’s birthday.

The defection is a huge boost to UKIP, which is looking to build on its sensational European elections triumph in May. Farage’s party is predicted to poach some of the Westminster seats currently held by the Conservatives.

If Cameron does not win the election, Eurosceptic Boris Johnson is tipped to take over as leader as the Tories.

Nigel Farage told EURACTIV that if Hill was given climate change and energy it would be a “straight insult to the British people”. “It will then be clear to all that EU reform is not possible, and the Britain is better off out of the EU,” he added.

Give us your reactions by using the #NewCommission hashtag or send them by email to editorinchief@euractiv.com

Nigel Farage, leader of the UK Independence Party, said, "It has been whispered that the UK’s Lord Hill may be given the internal market post. This is a junior portfolio stripped of important powers in the financial industry which Britain needs to protect.

"As one of the largest and wealthiest countries in Europe, the UK should be getting a more substantial post. It appears that Cameron has been humiliated by Juncker.

"Alternatively, if as floated today, Lord Hill is given the climate and energy portfolio then it will just be a straight insult to the British people. It will then be clear to all that EU reform is not possible, and that Britain is better off out of the EU. "

UK Prime Minister David Cameron waged a campaign to block the former Luxembourg Prime Minister and EU veteran Jean-Claude Juncker from becoming the next President of the European Commission.

Juncker was seen as the legitimate candidate for the post because he campaigned during the European elections as the leading figure of the centre-right European People's Party (EPP), which won the largest number of seats in Parliament.

But Cameron refused to support this because Juncker's candidacy did not appear on the ballot papers at the May election.

He insisted that EU heads of states and government took a vote on the matter during an EU summit on 27 June, even though he did not have a blocking minority.

Cameron has promised Britons an in/out referendum on Britain's EU membership if he is re-elected in 2015.

UKIP was the most successful British party in the European elections. The Eurosceptic party is now looking to build on that success, adding to the pressure on Cameron.