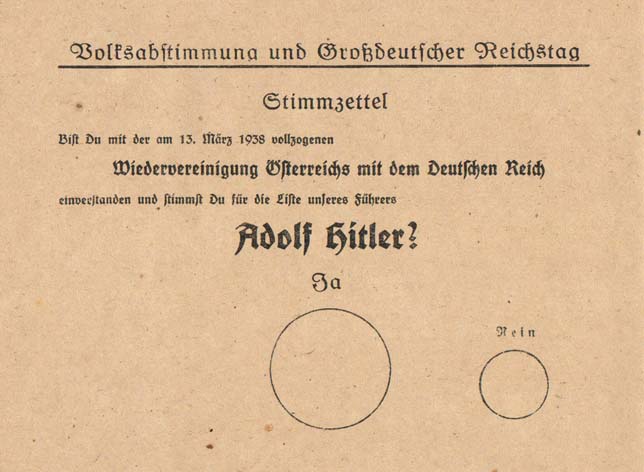 The rigged ballot paper used by Hitler to force the annexation of Austria. [Wikimedia Commons]

In an incendiary blog post on his party’s website, Dirk Hazell, chairman of the EPP’s British Committee, called for the UK’s Electoral Commission  – responsible for the voting slip – to resign.

Hazell is the leader of the 4 Freedoms Party, or UK EPP, which was set up after the British Conservatives left the group to form the European Conservatives and Reformists group.

“That 1938 ballot paper goes down in infamy as how not to do it,” Hazell told euractiv.com yesterday (14 March)

“But I think in one way the referendum paper is worse than the Hitler ballot paper in that it is subliminal.”

The EPP, which is affiliated to the 4 Freedoms Party, distanced itself from Hazell’s comparison to the ballot paper Hitler used in the 1938 Anschluss referendum. That rigged vote led to the Third Reich swallowing Austria with 99.7% support.

Spokesman Siegfried Muresan said, “The EPP believes this is an unacceptable comparison given the UK is a fully-fledged democracy.

“The EPP will not interfere in the UK referendum. It is completely up to the people of the UK to make their choice and we trust that the referendum […] will fully comply with the highest democratic standards.”

Hazell, a former chairman of the London Conservatives who ran unsuccessfully to become an MEP in the 2014 European elections stood by the comparison when contacted by EURACTIV yesterday (14 March).

“This is not deciding who is catering officer of the lower Tiddlemarch tiddlywinks club,” Hazell said. “This is major constitutional change and they’ve made a biased mess of the ballot paper.”

Anything as brazen as the Hitler paper would make the British public do the opposite, he added, but the Electoral Commission had reflected the 1938 slip’s “visual basis”.

Hazell said the Hitler reference was aimed at engaging a British audience. “Everybody knows that all Brits are obsessed by Hitler,” he said.

His other blog posts on the subject had not drawn media attention but a reference to the Fuhrer had, he pointed out.

Hazell’s blog claims that the Leave option in the Brexit ballot paper is more central than the word Remain, giving it a psychological advantage. 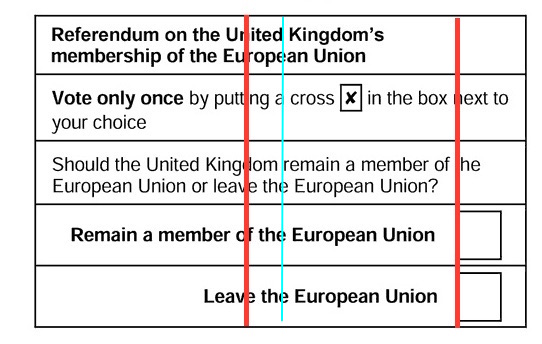 That is similar to Hitler’s placing of ‘Ja’ in the centre of his ballot paper, according to the UK EPP leader. 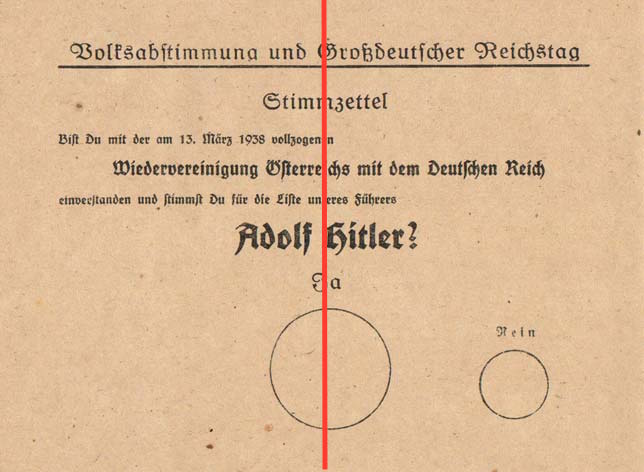 Hitler’s ‘Ja’ also benefited from emphasising clear space to the left of the desired choice, said Hazell. The Brexit paper was “getting on for twice as bad as Hitler’s” in terms of emphasising a similar space, he wrote.

Hazell goes on to point out other alleged similarities between the two papers, arguing that “leave” is unfairly central on the British ballot.

He said, “People who are undecided could be influenced. What we want is the British people to have an honest ballot paper.”

Hazell said the ballot paper used in the Scottish referendum on UK membership was a good example of a fair paper. It was neutral and concise, numbering just eight words compared to 51.

The Electoral Commission has responsibility for the wording and design of the paper.

It said, “We made clear recommendations about the question that should appear on the ballot paper for the EU referendum, which was based on the now well-established approach we have used at other recent referendums and includes research conducted with voters.

“We welcome the fact that the UK Parliament accepted our recommendation.”

The European People's Party affiliated 4 Freedoms Party was set up in 2014 by pro-European British Conservatives, disillusioned by the Tories quitting the EPP.

Conservative MEPs left the EPP group in 2009 to create the Eurosceptic European Conservatives and Reformists group in the European Parliament. 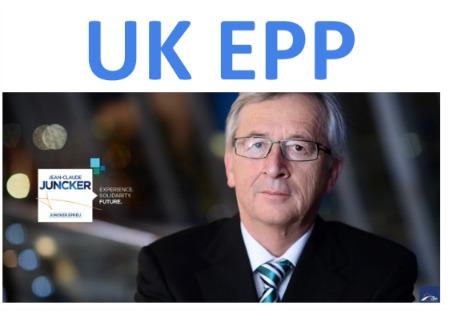 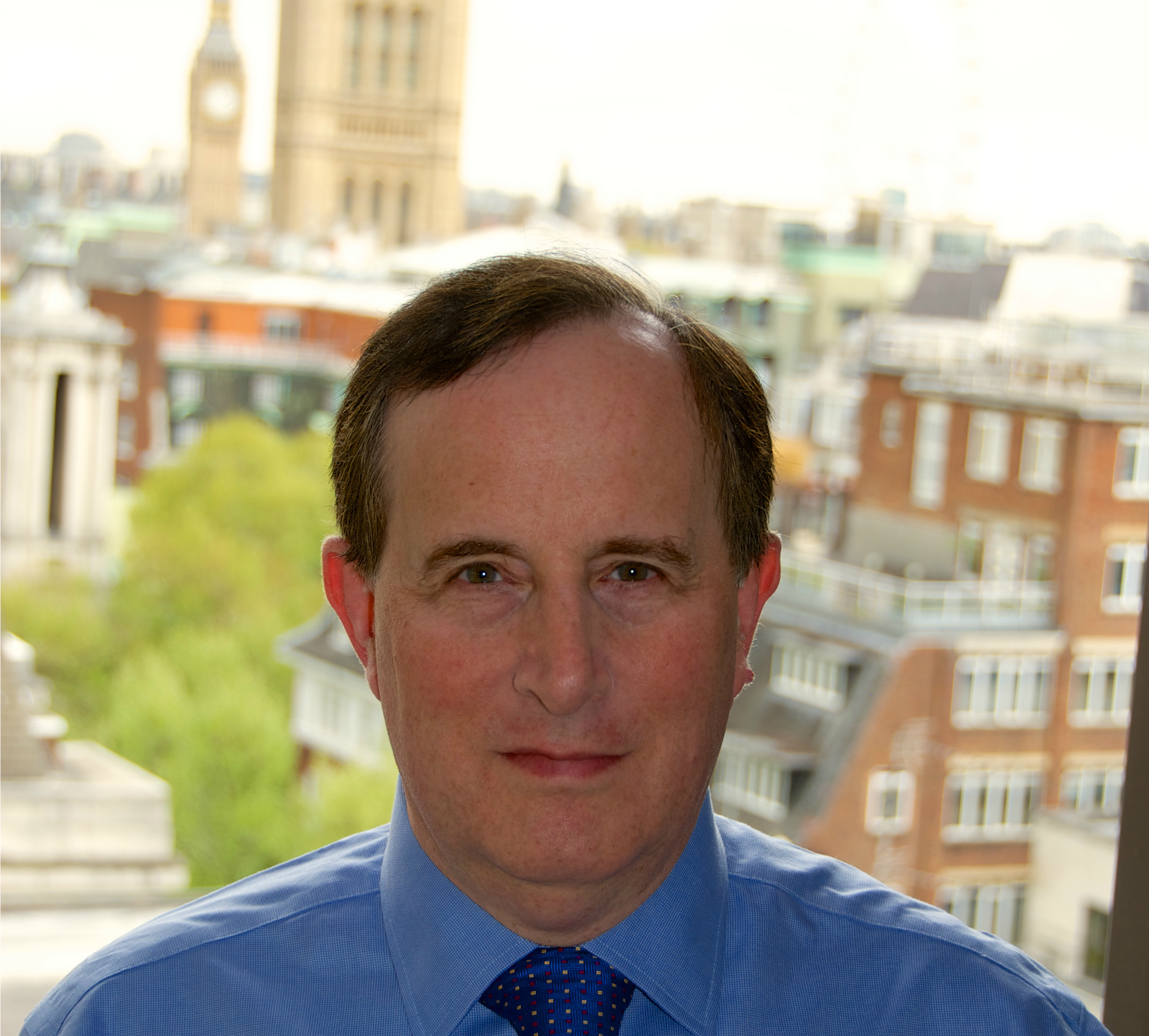