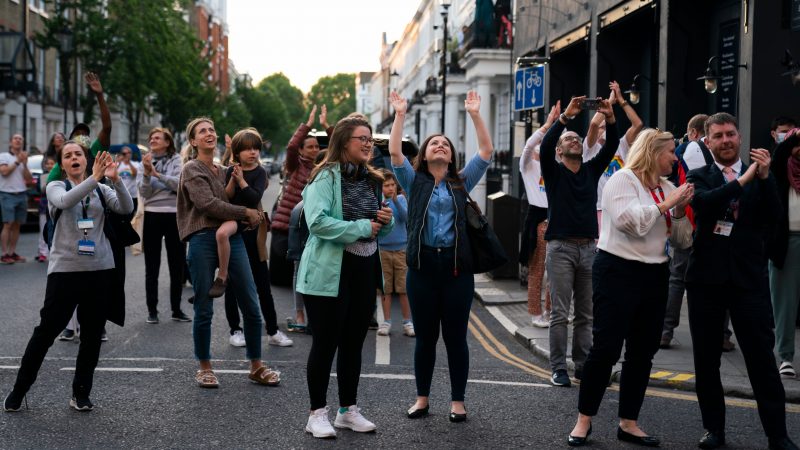 Member of the public applaud during the 'Clap For Our Carers' campaign in support of the National Health Service (NHS) outside the Chelsea and Westminster hospital in London, Britain, 7 May 2020. [Will Oliver/EPA/EFE]

British MPs on Monday (18 May) gave their initial backing to legislation ending free movement of workers with the European Union, but the vote was overshadowed by a row over foreign healthcare staff and coronavirus.

The bill would abolish the special immigration status for citizens of the EU, the European Economic Area and Switzerland when a post-Brexit transition period expires on 31 December.

It does not give details of what new controls would be introduced, but Prime Minister Boris Johnson has already outlined plans for a points-based immigration system that prioritises migrants with high-skilled jobs.

The desire to control Britain’s borders, namely ending the free movement of labour with the other 27 EU nations, was a key driver of the 2016 referendum vote to leave the bloc.

Home Secretary Priti Patel said on Monday that the new system would be “firmer, fairer and simpler”, and would “play a vital role” in Britain’s recovery from coronavirus.

But Nick Thomas-Symonds, from the main opposition Labour party, accused the government of alienating the people Britain relied on during the outbreak.

“It is rank hypocrisy towards our National Health Service (NHS) and care workers… to stand and clap for them on a Thursday night, and then tell them that they are not welcome in the UK on a Monday,” Thomas-Symonds said.

He was referring to the weekly practice in Britain to applaud care workers for their work tackling the coronavirus.

Just over 13% of staff in the state-run NHS have a non-British nationality, and 5.5% are from other EU countries, according to official figures.

Patel noted the government has already introduced a fast-track visa for doctors, nurses and other health professionals.

In addition, it has promised an automatic one-year visa extension for frontline health and care workers already in Britain, whose visas are due to expire before October.

Labour and other opposition MPs voted against the bill in its first stage, but Johnson’s Conservatives have a majority in the House of Commons, and it passed by 351 votes to 252.

Britain left the EU on 31 January after years of political wrangling over how to implement the result of the Brexit vote.

But it agreed a standstill transition with Brussels until the end of December, during which free movement continues, to allow the two sides to agree a new relationship.

Ireland will be exempt from the new immigration controls, due to a common travel area with Britain dating to before they both joined the EU in 1973.