The late Jo Cox MP, in a photograph posted by her husband Brendan on Twitter after her murder. [MrBrendanCox/Twitter]

British Prime Minister David Cameron called for unity Monday (20 June) after the brutal murder of an MP sparked accusations of hate-mongering just three days before voters decide whether to quit the EU.

The killing of Jo Cox last week shocked both sides of a turbulent campaign, with opinion polls showing rival camps now neck-and-neck before a momentous referendum Thursday that could determine the fate of Europe.

Financial markets rallied as prospects for the “Remain” side appeared to brighten in the latest surveys. London’s FTSE stock market index surged more than three percent and sterling made strong gains.

Divisions have opened up among pro-Brexit campaigners after UK Independence Party leader Nigel Farage released a poster Thursday showing immigrants trudging through Europe with a headline in red: “Breaking Point”. 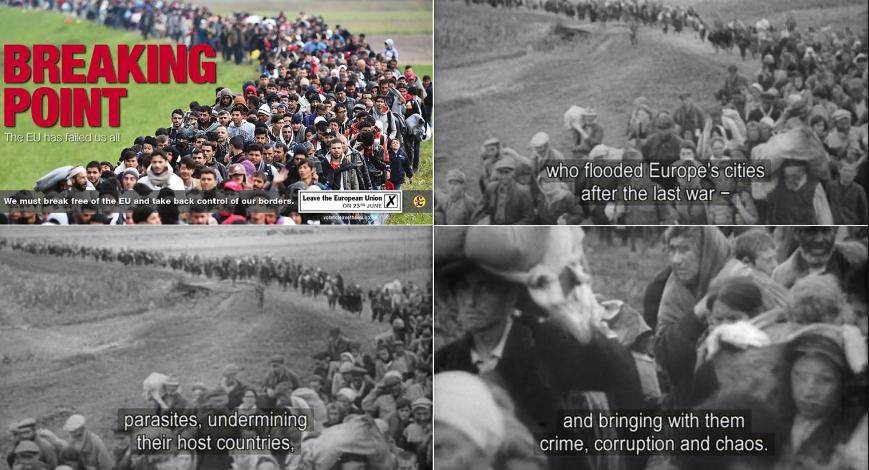 On the same day of the poster’s release, Cox, a 41-year-old mother of two, was on her way to meet members of the public in northern England when an attacker shot and stabbed her, leaving her bleeding on the pavement. She died of her injuries.

To cries of “hear, hear” in parliament, Cameron called on fellow politicians to remember the slain lawmaker by “uniting against the hatred that killed her, today, and for ever more”.

Cox’s husband Brendan and her children, aged five and three, listened in parliament’s gallery as politicians, sporting white roses in memory of her home county of Yorkshire, paid tribute.

Some lawmakers clutched handkerchiefs and wiped away tears. A white rose and a red rose symbolising her Labour Party were left on the bench where she used to sit.

Minutes before the parliamentary session opened, Cox’s alleged killer, 52-year-old Thomas Mair, appeared in court in London via video link from prison after being charged at the weekend with murder.

During a short hearing, he spoke only to confirm his name and was ordered to remain in custody. Asked to give his identity at a lower court on Saturday, he had replied: “Death to traitors, freedom for Britain.”

A close friend of Cox in parliament, Stephen Kinnock, said the lawmaker would have been “outraged” by Farage’s Brexit campaign poster.

“Jo understood that rhetoric has consequences. When insecurity, fear and anger are used to light a fuse, then the explosion is inevitable,” he warned.

Despite withering criticism, Farage said the poster was an accurate depiction of the refugee crisis in the EU and accused his rivals of unashamedly using Cox’s death to boost their cause.

“The ‘Remain’ camp are using these awful circumstances to try to say that the motives of one deranged, dangerous individual were similar of half the country or perhaps more who believe we should leave the EU,” he told the BBC.

But a senior member of Cameron’s Conservative party, former party chair Sayeeda Warsi, said she was withdrawing support for “Leave” because of the poster.

“Are we prepared to tell lies, to spread hate and xenophobia just to win a campaign?” she asked.

Farage dismissed her defection, describing it as a “Number 10 put-up job” – a reference to Cameron’s Downing Street office – and cast doubt on whether she had ever really been part of the Brexit camp.

If Britain leaves the EU, it would be the first nation to do so in the bloc’s 60-year history.

The British referendum has opened the prospect of other nations demanding a vote, too, perhaps placing in peril the very survival of the European project, which was born out of a determination to forge lasting peace after two world wars.

“Whatever the UK vote is, we must take long hard look on the future of the Union. Would be foolish to ignore such a warning signal,” European Union president Donald Tusk wrote on Twitter.

“I appeal to the British citizens: Stay with us. We need you. Together we will cope with future challenges. Apart it will be more difficult,” he added.

While the ‘Remain’ camp has tried to focus on the potential economic damage that Brexit could inflict, the ‘Leave’ campaign held out the promise of Britain taking better control of mass immigration if it leaves the EU.

The ‘Leave’ and ‘Remain’ sides have now battled each other to a stalemate with each on exactly 50 percent support, according to an average of the last six polls calculated by research site What UK Thinks.

Both sides agree the stakes are high.

“I hope you will vote ‘Leave’, and take back control of this great country’s destiny,” pro-Brexit campaigner Boris Johnson – a former London mayor who is touted as a future prime minister – wrote in the Daily Telegraph.

“This chance will not come again in our lifetimes, and I pray we do not miss it.”

Footballing powerhouse the Premier League also weighed into the debate on Monday, saying Brexit would go against the “openness” of the league and all of its clubs.