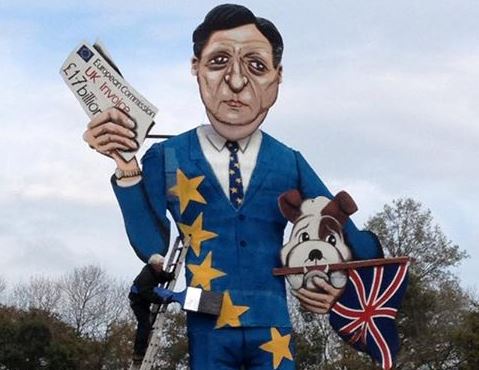 Every year on 5 November, Brits set off fireworks and burn “guys” on bonfires in the traditional commemoration of the 1605 failed Gunpowder Plot by Catholic conspirators to assassinate King James I.

The Edenbridge Bonfire Society organises one of the most famous celebrations, picking a contemporary hate figure to be burnt in effigy. This year, organisers in the Kent town picked Barroso, influenced by the controversy of the 2.1 billion top-up to the UK’s contribution to the EU budget.

Edenbridge Bonfire Society can reveal that our Guy this year is José Manuel Barroso, the exiting President of the EU Commission.

The row over a hefty top-up to the UK’s contribution to the EU budget worsened on 27 October as Prime Minister David Cameron repeated he would not pay, and the EU Budget Commissioner warned there was no possibility of delaying payment without re-opening questions over the UK’s rebate on the European budget.

€2.1 billion is equal to a fifth of the UK’s annual transfer to Brussels. Other countries, such as Germany, and France – which has struggled to balance its budgets – will get rebates under the plans.

An emergency meeting of EU finance ministers will be held on Friday to discuss the bill, which has sparked widespread comment in the British media.

Cameron has branded the demand for a top-up to the UK’s contribution to the EU budget “an appalling way to behave”, which “certainly didn’t help make a strong case for Britain to remain in the EU.”

Edenbridge Bonfire Society tweeted that UK Independence Party leader and MEP Nigel Farage would be interested in their choice of guy this year.

The bill and Barroso-burning comes as voters prepare for the by-election sparked by Conservative MP Mark Reckless’ defection to UKIP.

A victory for UKIP will up pressure on Cameron to toughen his stance on the EU in the run-up to next year’s general election in May. The Tory leader has promised a referendum on the UK’s EU membership in 2017, if the Conservatives are elected.

What is Guy Fawkes Night?

The foiled conspiracy was to blow up the UK House of Lords during the state opening of parliament, killing the Protestant King James I, and replace him with a Catholic head of state.

Guy Fawkes was captured in the cellars with 36 barrels of gunpowder and later tortured and gruesomely executed. His co-conspirators were also hanged, drawn and quartered.

Ever since, there has been a tradition of lighting bonfires and fireworks to celebrate the king’s escape from the Catholic assassination plot.

Every year on 5 November, Brits set off fireworks and burn “guys” on bonfires in the traditional commemoration of the 1605 failed Gunpowder Plot by Catholic conspirators to assassinate King James I.

The Edenbridge Bonfire Society organises one of the most famous celebrations, picking a contemporary hate figure to be burnt in effigy.

The UK national elections will be held next year in May. David Cameron has promised a referendum on the UK’s EU membership in 2017, if the Conservatives are elected.

0 responses to “British townsfolk to burn Barroso on bonfire”