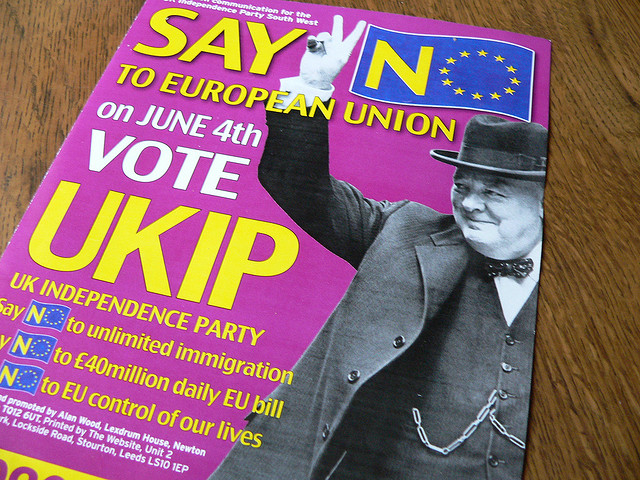 Britain’s economy could grow by 1.3 billion pounds if it left the European Union due to less regulation and more trade with emerging economies, acccording to a British diplomat who dreamt up a blueprint for the country’s EU exit.

Britain’s free market Institute of Economic Affairs on Tuesday awarded a 100,000-euro prize to Iain Mansfield, a British diplomat based in the Philippines, who it decided had come up with the best proposal for a ‘Brexit,’ a British departure from the EU.

Amid widespread public disenchantment in Britain about the EU’s perceived over-bearing role in everyday life, Conservative Prime Minister David Cameron has promised to give Britons a referendum on leaving the EU in 2017 if he is re-elected next year.

Many opinion polls suggest a slim majority would vote to leave the 28-nation bloc, and that the anti-EU UK Independence Party (UKIP) is on course to come first or second in elections to the European Parliament next month.

Mansfield said Britain could join the European Free Trade Association (EFTA) to avoid bureaucratic burdens on business linked to Britain’s membership of the EU, saying it could position itself as somewhere between Switzerland and Turkey, neither of which are EU member states.

Mansfield, director of trade and investment at the British Embassy in Manila, argued that significantly fewer regulations, coupled with greater trade with emerging economies, could provide a real boost for Britain’s economy.

If Britain, one of the EU’s net budget contributors, left the bloc, it could reallocate the money it saved on contributions to pay down its deficit to enjoy a 10-billion pound surplus, he said.

“I take no position on whether a Brexit is desirable, but in the event of such a decision by the people of Britain, my paper sets out a course of action that would maximise the potential for an open, prosperous and globally engaged UK,” Mansfield said after his win.

Economic incentives from an EU exit would include a reduction in the rate of corporation tax, the creation of special economic zones in poorer regions, and a rise in the research and development tax credit for new investors, he said.