Borissov and Theresa May at bilateral meeting on 19 October 2017 in Brussels. [Council]

The draft law proposing a so-called intermediate parent undertaking (IPU), whereby foreign banks would have to bring their EU operations under a single holding company, is widely seen as a tit-for-tat response to rules issued by the US Federal Reserve requiring large foreign banks in the United States to form holding companies.

The EU proposal could also apply to large British banks after the country leaves the European Union. 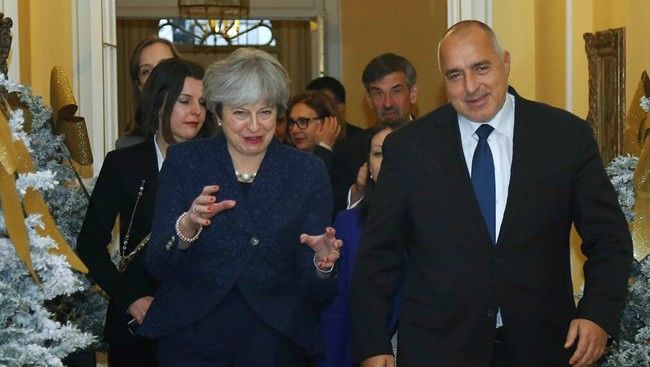 Bulgarian Prime Minister Boyko Borissov took the liberty to comment on Brexit on the sidelines of the EU summit on Thursday (14 December), using language that obviously diverges from the common line adopted by the EU27.

The aim of the draft EU rules is to make it easier for the bloc’s regulators to deal with a crisis at a foreign bank. It would also increase regulatory checks on foreign lenders and in many cases raise their costs.

In a document seen by Reuters, EU presidency Bulgaria has proposed changes to the draft rules put forward by the European Commission in 2016, saying the IPU requirement should kick in when a foreign bank has total assets of at least €40 billion ($49.20 billion) in the EU.

The initial proposal established a €30 billion threshold and the automatic inclusion of globally systemic banks, which would force 19 large foreign lenders to adapt to the stricter rules.

The change would bring the EU in line with the $50 billion threshold enforced under US rules on foreign banks.

The EU presidency amendment could also result in a significant reduction in the number of banks covered and help Europe to look more attractive at a time when US President Donald Trump has cut corporate taxes for banks and other businesses.

There are 30 global banks, such as HSBC, Goldman Sachs, Morgan Stanley and Barclays, that have been deemed by international regulators and central banks to be globally systemic and must comply with tougher capital requirements.

Under the original EU proposal, foreign banks on the global list of systemic lenders would be required automatically to set up an IPU irrespective of how many assets they have there.

The document shows that the EU presidency wants to end this automatic inclusion, moving in line with US rules, which do not discriminate between systemic and non-systemic lenders.

The presidency document also proposes that a future review of the new rules should take into account changes made to the US regulations, given that the U.S. Treasury may narrow the scope of its rules. Japan and China have also said they may introduce similar measures, the document said.